Sunderbans: A Forest Tide To Life 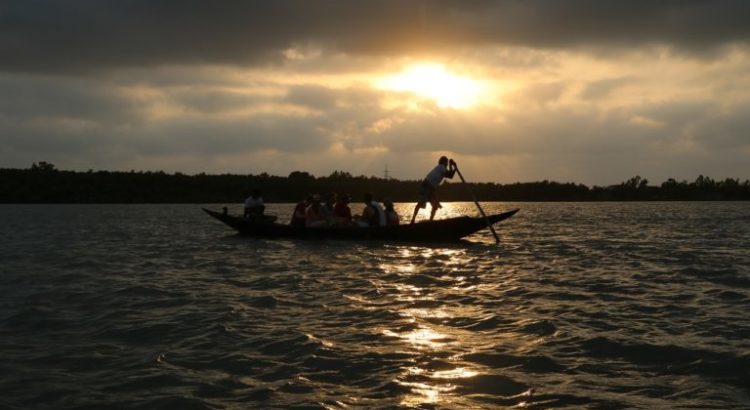 Sunderban means beautiful forest. Another local name by which this place is called is Bhatir Desh, which would translate as tidal country. So it is a land where tide rules and it has a beautiful forest. Well that sounds interesting and unusual. But it is much more than that. What you face once you are here is grand, unique, dynamic, tough, raw, undiluted and above all, beautiful.

Twice a day, in a twelve-hour cycle, the sea water rises (up to 2.15 m) and enters the land mass through innumerable water channels of different sizes. Only to recede. Twice a day mangrove forests are inundated and many islands are submerged. This is a place where you will never know where the river ends and the sea begins. It is a constant dance between the seawater and river water. A continues choreography between the land and the sea. One step forward and one step back. And the Humans and other living beings, who have made this ever changing country their home, have totally tuned themselves to this dance of nature.  This water, which is neither salty sea water and nor fresh river water, stretches inland as far as 300 kilometers, broken into numerous big and small streams.

Many people come to Sunderban to see the tiger. Frankly speaking, if seeing the tiger in the wild is your top priority, then Sunderban is not the place for you. You would be much better doing the formalized trails on jeeps in Bandhavgarh, Kanha or Pench tiger reserves of Madhya Pradesh, where you are most likely to see the tiger. But Sunderban is a totally different ball game. Its ecosystem is so unique that it has been granted the status of UNESCO World Heritage Site.

But I did see some deer, crocodiles, birds, crabs and one fleeting glance of Irrawaddy dolphins. But what was left etched in my memory was when I saw a Mohona. Mohona, is an evocative and magical name the locals have given to a place in Sunderbans where many rivers meet. In Sunderbans, there are Mohonas where four, five and even six rivers meet. When channelling through a water inlet with mangrove forest on both sides, your boat enters a Mohona, it is a truly magical and overwhelming experience. You find yourself on a horizon full of water. But in some directions, you will spot faint tree line far away, just a reminder that it is after all not an ocean, but a confluence of rivers. You will also be able to perceive one or two rivers entering this confluence. Suddenly you feel too insignificant as a human in a scale of scenery so grand. The Mohona our boat had entered is called Panchmukhani (one with five mouths) on the main river called Bidya, wherein all five rivers were meeting.

Going by the geological standards, Sunderban’s origin at around 7000 years, is very recent. It was created due to gradual deposition of the silt carried by two major rivers of the Indian subcontinent, Ganga and Brahmaputra, as they meet the sea at the Bay of Bengal sea.

The Sunderban extends well into Bangladesh, on the eastern side, across the international border. A total of 9,630 sq kms with 4, 265 sq km in India. One of the distributaries of the Ganga-Brahamputra, called Raimangal, is the dividing line between the Indian side and Bangladesh side of the Sunderban. In all there are nine major rivers flowing from Sunderban into the Bay of Bengal on the Indian side, namely, Matla, Bidya, Ichamati, Raimangal, Herobhanga, Thakuran, Gosaba, Saptamukhi and Baratala. All these rivers keep changing their course frequently, as a result, new islands are formed continuously and as the old ones disappear. The larger islands are permanent but even their shapes keep changing. This dynamic land is the result of the strong tide that is a daily reality in Sunderban.

Sunderban is located in the North and South 24 Pargana Districts of the Indian State of West Bengal. Sunderban Biosphere Reserve at a total of 9630 sq km, is the third largest such reserve in India having got this status in 1989. The core of the reserve called, Sunderban National Park, was included in the UNESCO World Heritage List in the same year and is in the UNESCO World Network of Biosphere since 2001. It consists of three zones, that is, core area (1692 sq km), Buffer Zone (2233 sq km) and the Transition Zone (5705 sq km). The core zone is called the Sunderban National Park, and the buffer zone is made up of three wildlife sanctuaries, namely, Sajnekhali (362 sq km), Lothian Island (38 sq km), and Holiday Island (6 sq km).

What to see and how

Sunderban is divided into two types of islands. One, which have human habitation and two, the ones without any human habitation. The best option to see Sunderban would be through an organized tour operator.  They take groups from Kolkata on a basic, two days and one night trip. You can increase this duration for extra-charge. During this trip, your food, lodgings and bottled water needs are taken care off by the organizers. All of them use converted fishing trawlers as cruise boats. You have the option of either spending the night on the boat or on huts on eco-villages. Both are good options. It takes about three hours by road covering 100 kilometres to reach Sonakhali island, from where boats can be hired. Another way to enter Sundarban is through Bakkhali island, which is a 3.5 hours journey by boat. Bakkhali is a tourist destination by itself with a pretty beach and a good West Bengal Government Guest House. It is close to Sagar Island where an annual Ganga Sagar fair takes place.

Once you reach your accommodation in one of the inhabited island, the first thing you could do is to roam around the island and see how the local community lives. The people living in these islands are directly dependent on forest, forest based resources and fishery, because agriculture here does not yield much due to high salinity of the soil. Main source of commerce for people here is the forest products such as timber, fuel wood, wax, honey and thatching leaves. Off course the main source of sustenance is the fishery.

The islands with human habitation have a mud bund which separates the inside of the island from the tidal water. You would notice that each household inside the island has a dedicated freshwater pond, where fish are grown for family consumption or trade as well. Another interesting aspect would be to explore the culture of the Sunderban. Such as the temples of Bonobibi.

Bonbibi or Bondurga- protector of the forest dwellers

As per local legend Bonobibi, the much-venerated forest goddess of the area.  As per local legend, Bonobibi, is a goddess who protects the people who venture into the Sundarban forest for honey and wood, and lords over the human-inhabited part of Sunderban. People, on the other hand, fear and worship too, Dahkkin Rai, the lord of the deep forest. Dakkhin Rai, is the enemy of the people and is known to attack people venturing into the forest in the form of a tiger. But Bonobibi would protect anybody who chants her prayer if attacked by Dakkhin Rai. Her idol is adorned with ornaments, she wears a crown and rides a tiger or a crocodile. Her temple is usually a thatched roof on the banks of the river and not in a conventional temple. In her temple, she is often shown having a young boy, called Dukhe sitting on her lap. He was the one who first invoked Bonobibi as protection against Dakkhin Rai in the deep Sunderban forest.

She is a goddess who is worshipped by both Hindus and Muslim population of Sundarban, thus making here a strong symbol of syncretic character. Interestingly the idol of Bonbibi is dressed differently by both communities. The Hindu Bonbibi wears a sari and the Muslim one wears a paijama.
But in recent years, this syncretic symbol is being undermined by polorising factors. As a result in many Hindu temples originally dedicated to Bonbibi, she is not the central goddess. Her prime place has been given to purely Hindu Durga. Even in the Muslim community people are being discouraged to worship the idol of Bonbibi, which is considered against Islamic beliefs.

Sajnekhali is the place where you officially enter the Sunderban. There are an interpretation centre and a hatchery for crocodiles. There are around 103 tigers in Sunderban. The tigers here are exceptional for they are not only agile swimmers but have adopted to drinking saline water too.

The prominent way to see wildlife in Sundarban is through a boat ride. The other way is to get up some watch towers created in the forest area by the forest department. These watch towers overlook a vast patch of forest and if you are lucky you will spot wildlife.

We visited the watchtowers at Sajnekhali, Sudhanyakhali and Dobanki. The Dobanki watchtower had an elevated walkway (175 m) over a part of the forest.

The best time to visit, if you go by the weather, is between November and March. Rest of the year, weather is very hot and humid. It is not only tough to travel during the hot season but the chances of seeing wildlife is also less. But during the hot season which is also the off season, things are much quieter and you will enjoy the stunning natural beauty of mangrove forests and waterways, much more. During peak season (November-March) there are too many boats and tourists crisscrossing the waterways which surely takes of the sheen of the natural wonderland you are in. The chances of spotting a tiger are anyway too dim even during high season, but you will be able to spot other wildlife such as saltwater crocodiles and migratory birds.

If you are not too keen on wildlife then there is much more to appreciate in Sunderban. For one, the way the locals eke out a living in this dynamic landscape, is a fascinating thing to observe and learn. The way the humanity here has adjusted to the strange nature of the land they live in is a most interesting thing to know about. The local culture (folk music, food and gods) is something that is innate to this fascinating land.

Akshaya Mohanty: The Unorthodox-Versatile Singer’s Romance With His Odia Roots