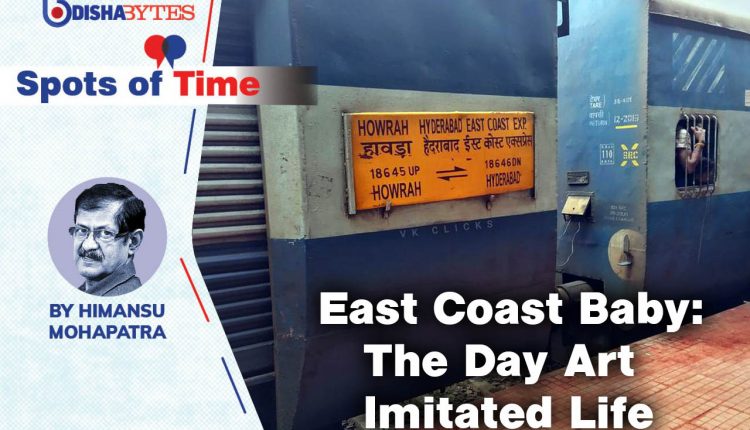 It is as if fate had ordained that life and art synched in perfect harmony. Only days after becoming a daily commuter, as a result of an unexpected job switch, I chanced upon a Sunday magazine article on the lives of commuters. I was happy now at the prospect of life imitating art. As a literature teacher, I naturally built castles in the air. But I had forgotten that life had the habit of gate-crashing the party. For my life on wheels unravelled along the slow and unsung track from Berhampur to Bhubaneswar rather than along the fast and glamorous track from Pune to Bombay that the Sunday magazine piece talked about.

Not for me the thrill of the early morning rush or the kick of the gossiping bandwagon. In fact, all buzz was lost in the mad scramble for seats. Fights and fisticuffs broke out too often over a handkerchief missed or misplaced. The experience was positively scary. Then there was the matter of the inhuman crowding inside the train compartment and the foul stink of so many unwashed bodies huddled together like potatoes in a sack. To make matters worse, the railway authorities, a few weeks after flagging off the new DMU train, had removed all the toilets in a bid to make the train carry even more people. They rode roughshod over the fact that bladders and bowels were not designed to withstand a 4-hour ‘trainathon’. The plight of the women passengers could only be imagined in a situation like this, for they, unlike men, couldn’t jump out and stand in a line for a synchronised relieving during the 2-minute halt at Balugaon. Gender got into even a simple train ride.

When after a few months I thought I had hit rock bottom, I had a chance meeting with someone who helped me stay on course for the rest of my 5 long years of commuting. He was Behera babu, the senior most amongst the hundred and odd daily commuters to Bhubaneswar. That morning he happened to be travelling by the dreaded DMU. He spotted a new face, squinting through his glasses. For me too his face was new. The man looked about fifty-five.

“Who is this new friend of ours?” Someone from the group introduced me as the Professor sahib. Behera babu eyed me with keen interest for a while. The expert eyes of a seasoned commuter quickly detected my unease and my awkward ways. I was soon sized up as being good neither for gossip nor for the ‘time-pass’ card game. My job had rendered me unfit. He didn’t fail to notice the big book I had on my lap and my abortive bid for an immersive read in the face of movement, din and chaos.

“Why don’t you take one of the trains between 2 and 5 at night? There is East Coast Express which leaves at 2.30 am. Konark is at 4.00 am. Then Trivandrum-Guwahati, Cochin-Guwahati and so on. I would recommend the East Coast. That way you will catch some sleep and reach early in the morning. You’d be better prepared to face the day. But you must get yourself an MST.”

“Monthly Season Ticket,” another commuter called Ramnath explained. “It’s cheaper, for one thing, and it entitles you to travel in reserved compartments. Plus no time lost on standing before the ticket counter to buy a ticket every time you travel,” he added. Before my mind rose the picture of the dreaded thronging at the ticket counter that morning. I had come a full hour before the train departure time, but had been very near to missing my target.

I put the plan into execution at the next available opportunity, which was the first Sunday – technically Monday – of the following week. Getting to the railway station at an unearthly hour was indeed a problem. But I made it, partly by walking and partly by a rickshaw ride.

Arriving at the station a good 15 minutes before the train was due, I looked for the most reassuring face in the crowd. Behera babu was standing towards the far end of Platform 1, clad in a full sleeve shirt with red and white stripes that was tucked into dark grey trousers. With his shirt sleeves rolled up in thin folds just above his elbows and his half shoes, not to mention the small, cheroot-shaped backpack slung over his left shoulder, he looked every inch a commuting veteran. He certainly knew how to travel light. Beside him I, with my large and unwieldy shoulder bag, looked a complete greenhorn. I couldn’t, however, suppress my curiosity.

“Do you think you have everything you will need on the train on a chilly night like this? You also need clothes for the day job, as you know. That backpack does not look very capacious to me.”

“Behera babu is a great planner. The clothes you see him wearing are the ones he will wear in office tomorrow. The moment he gets on board, he will change into a lungi. This along with a clean piece of linen and an air pillow plus a shaving kit is tucked into his backpack. Since it is the cold season, the shawl can be carried on his person. In the hot months the shawl will be replaced by another thin piece of linen. Behera babu has been carrying on like this for 25 years.”

I couldn’t miss noticing a pattern. To every query to him a fan of his would respond in answer. Perhaps it was another hallmark of a veteran.

“And yes,” continued this fan, “Behera babu treats the train as an extension of home, performing his daily chores inside it before stepping out into the day and into PMG’s office as fresh as a lark. But hark the train is coming.”

The train crawled into the station on Platform 1. The group was ready in a jiffy. It had already staked out its territory well and boarding was smoothly done. I just had to follow them. The compartment was dark, but the commuters had no difficulty in finding the empty berths. They preferred the middle berths because they were less likely to be soiled. One reason for Behera babu recommending East Coast Express was now clear to me. The train had plenty of empty berths in some of its 2 and 3-tier coaches, non-AC, I must add. I, too, found myself a middle berth and settled in it comfortably. It felt quite a treat after the subhuman herding of DMU.

The train, however, did not move. While the long distance travellers slept and snored loudly, the commuters started fidgeting in their berths. A delayed departure meant a delayed arrival. The commuters who gambled everything on a strict regimen of time had reasons to worry. The disruption of the day-to-day schedule they lived by was the most nightmarish thing imaginable. Given the unpredictability of the country’s social life what with sudden calls for chaka bandh and rasta roko, not to speak of occasional derailments, such disruptions were experienced by the commuters ever so often. It was only a few days ago that I had been stuck halfway between Berhampur and Bhubaneswar for the whole day, with not even a bottle of water to buy.

Shouts of people and sounds of hurrying feet outside indicated that it was not a routine delay due to the non-release of the green signal. Something unusual had happened. Behera babu went out to enquire. He returned after a few minutes to break extraordinary news: a woman in the adjacent coach was in labour and was about to deliver.

Behera babu went out again and returned after a few minutes to tell us that Dr Tripathy, the  railway doctor who lived in a quarters near the station, had been sent for.

The shout of “doctor is here” rent the air at this point. A big crowd had gathered in front of the coach by then. Behera babu cleared a path for the doctor and took him to the door of the coach, but didn’t go in, the gentleman that he was. As he wished the doctor luck with the important task, he said, “Doctor sahab, help deliver the baby and arrange for our deliverance.”

He stayed close to the compartment’s door and updated us from time to time: how the would-be mother’s female relatives and other helpful women passengers had already prepared a makeshift birthing den by cordoning off and securing one portion of the coach with sarees and towels, how hot water was supplied from the pantry car, and, how the railway staff were on standby to deal with any sort of emergency. A doctor’s presence only served to top up these midwifery preparations. The baby was delivered without much trouble.

Behera babu clambered aboard shortly after the hurly burly was over and, as if on cue, the train crawled out of the station.

“It’s a doula doula baby boy,” he said, adding ‘roly-poly’ to a query from a non-Odia passenger about the Odia expression.

“It needs a befitting name. Let us, in memory and honour of our carrier and saviour, name it EAST COAST BABY,” Behera babu said, to a chorus of ‘hear hear’ at that ungodly hour.

It was not only that I was well on my way to learning the ropes of commuting; the day also taught me that there was stuff in my new ‘life on wheels’ that would make art die to imitate life.