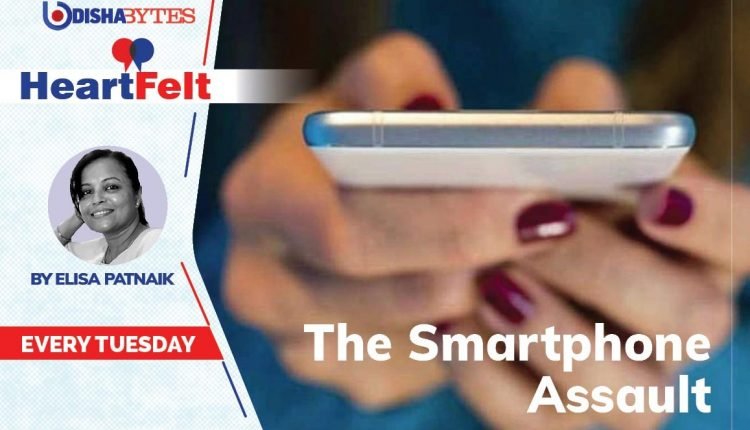 When I resumed travelling post the peak period of the COVID pandemic this year, I was filled with the anxiety and paranoia of a first-time traveller. The all-pervading crowd and the double mask compounded the apprehension. However, as I settled down in my 2-tier AC seat in the train compartment, I began to gently relax hoping it would be a peaceful journey after all. Little did I know that I would be assailed by a swelling wave of another kind!

As soon as the train geared up, it reverberated with a cacophony of sounds. Not of hawkers or crying and playful kids. But of loud music, bhajans, dialogues, jokes and conversations – all emanating from the cellphones to which my co-passengers were all glued to.

While the young couple beside me gleefully enjoyed an Odia movie playing on full volume, the elderly gentleman nearby closed his eyes and nodded his head peacefully listening to a bhajan. A group of boys on the next seat were rolling with laughter as they watched a series of loud obnoxious jokes from a stand-up comedy show. A child sat mesmerised watching his favourite cartoon Chota Bheem on full volume, while his mother continued giving loud updates on the journey every 15 minutes over video calls.

As I sat with my book, unable to read even a few lines, I was not just infuriated but also felt helpless at such blatant disregard for co-travellers’ privacy and space. None of the passengers deemed fit to use ear/head phones to enjoy whatever they were enjoying and were completely at ease with the noise that they and others were creating. The cell phone was like a new toy in their hands which they simply couldn’t resist playing with. A few passengers who were on audio calls insisted on switching over to video calls justifying to the person other side that since they were free, a video call would be good way to pass their time.

I was also struck by the urgency with which people immediately got back to their phones as soon as they settled down. As if they were missing out on something of great significance and use.

Unfortunately, I was not spared for the entire seven hours duration of my journey and had to bear the loud music, dialogues and conversation despite putting my ear phones on. My requests to reduce the volume or use ear phones was met with strange and unbelievable looks as if I was violating their basic human right to enjoy. None of them seemed apologetic or chastised for being noisy and imposing either.

Loud, annoying and disruptive cellphone behaviour in public places is becoming increasingly a nuisance. I have been privy to many romantic calls in airports, inside flights and trains where love struck men and women do not hesitate to express their most intimate thoughts even when surrounded by people. Or parents in an aircraft making all kinds of funny faces and sounds to their kids on the other side.

I remember, during one of my earlier travels where an elderly gentleman started playing bhajans loudly on a 7 am flight for the entire flight to listen. When asked to use ear phones, he replied: “What’s the problem in listening to bhajans in the morning? In fact, all passengers should enjoy it!”

A similar incident also happened in a movie theatre where a person sitting in front continued to receive video calls in the darkened hall saying it was an urgent call which he had to take. Many in the audience had not even bothered to keep their phones on silent mode and so, we were treated to all kinds of ring tones throughout the movie.

Morning walks in neighbourhood parks are no longer peaceful with other walkers listening to music loudly. I don’t know whether to be annoyed, flabbergasted or laugh when people whom I have met only once want to befriend me on social media and also demand why I haven’t responded yet?

A cellphone is no longer just a telephone and has become an integral part of modern living for many people. It’s as if with growing and easy access to unlimited information, content and people, all within a short span of time, users simply cannot stop engaging with it.

It’s not just the senseless use of mobile phones but the access it has given the users to take privacy and consent for granted. Now complete strangers do not hesitate to take your photographs or casually ask if they can click your children or your pet’s photograph.

We Indians have never been known to respect the privacy or personal spaces of others both within the house and outside. We are usually under the impression that we have every right to invade the privacy of others and be intrusive. And with the cellphone, the sense of entitlement has reached a new high.

When it comes to cellphone usage, most of the users view public areas and locations like parks, movie theatres, public transports and waiting areas as acceptable places to use their cell phones. People’s cellphone use has aggressively invaded itself into public spaces and others’ privacy, blurring the line between private and public.

We are now all privy to intimate phone conversations, official talks, business deals along with of course, the entertainment content. Loud voice and video calls and watching content without head/ear phones are among the most annoying, yet common sights today.

Cellphones have indeed become indispensable, especially post-COVID pandemic where most jobs require employees to be available on phone throughout the day, even beyond work hours. It means most people need to be available on their phones in public places. This, coupled with our need to be connected 24-hours and our cell phone addiction, has reached a point where nearly everyone in public is either talking, messaging, scrolling through social media, watching a movie, playing a game, reading the news, or clicking photographs.

With cellphones invading all aspects of our personal and professional lives, it is high time we start building and advocating for both etiquettes and rules on its unrestricted use in public places. Instead of just being an individual responsibility where we need to monitor and control own behaviours, it is essential to curb such conduct in shared public spaces.

Ironically, enforcing regulation on use of mobile phones in public areas is also required to enhance social interactions in public, which incidentally has come down drastically with individuals staring at their phones constantly. With ceaseless engagement with their phones, people now appear to be unwelcoming, unfriendly and unapproachable. Senior citizens in need of assistance, a lost passenger in need of directions or a pregnant lady wanting help with her luggage for example, hesitate to seek help from their fellow beings in the fear that they may disturb others.

As if enduring issues of data privacy breach and allowing ourselves to be available and connected for 24 hours through our cell phones were not enough to hamper our peace and wellbeing. Having to suffer the onslaught of loud, unwarranted private conversations and other content blaring from cell phone users seems a bit too hard to bear.