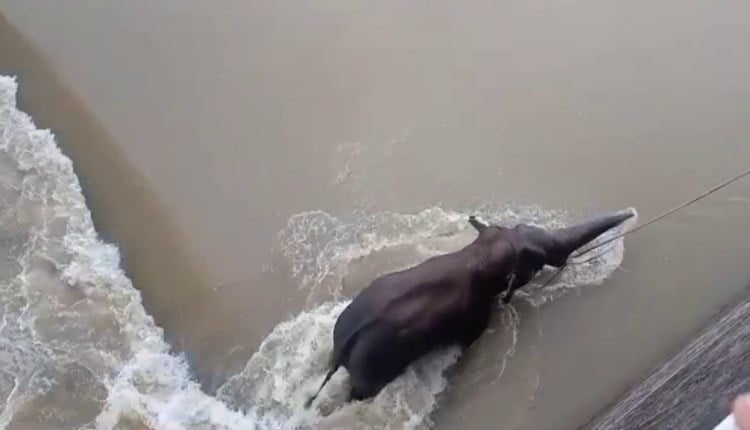 Cuttack: Swept away by strong currents in the Mahanadi, a tusker was found stuck near Mundali bridge in Odisha’s Cuttack on Friday.

Two elephants have reportedly been swept away towards Naraj while trying to save the stranded tusker. Rescue operation is underway by the fire services personnel.

According to sources, the tusker was swept away by heavy currents while crossing the Mahanadi near Mundali. It was part of a herd of 17 elephants, which was on its way to Chandaka from Nuasasan in Athagarh block. The tusker was caught in the swirling water and was unable to move due to the strong current in the river.

Locals spotted it on hearing its trumpeting sound and immediately informed the fire brigade personnel.

“All except the tusker were able to cross the river. The level of water is very high near the spot. We are trying our best to rescue the pachyderm,” said Athagarh Ranger Ayesha Nisha.

Meanwhile, senior forest officials from Chandaka are heading to Mundali to join ‘Operation Gaja’ for rescuing the tusker. Crane will be used to pull the mammal out of the water to safety, sources said.

“Rescue operations should be expedited, delaying will risk the life of the tusker,” wildlife expert Jayant Mardaraj Harichandan told the media.

Around eight elephants are still in the forested areas near Banki, the sources added.