Unique Practice Of Kali Puja: Two Idols Worshipped In This Place Of Cuttack For 6 Centuries 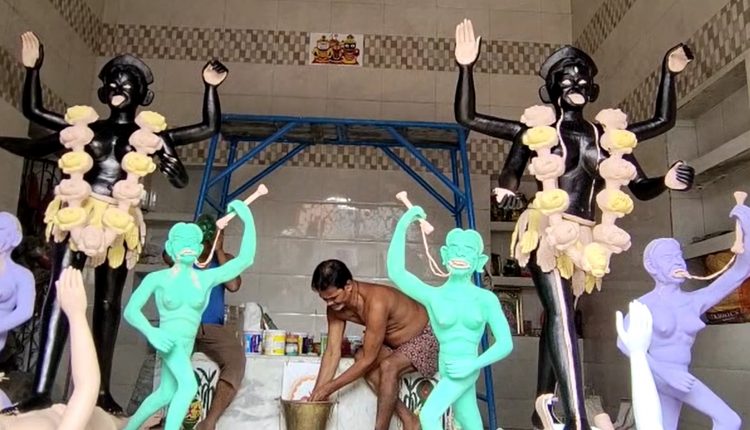 Cuttack: Bidyadharpur in the city, which has been celebrating Kalui Puja for six centuries, is all set for performing the puja on Thursday.

The Kali puja in this part of the Millennium City was started by Chatterjee family who came from Kolkata in 16th century. The puja here, which holds several significant features, is widely reputed for worshipping two idols of Goddess Kali. While one idol is of Kali, the second one is of Her elder sister.

Another special aspect of the idols in Bidyadharpur is that those are painted in black though its reason remains obscure. “The idols of two Devis have been painted with black colour for many centuries. I am doing the idol work for the last 25-26 years. I am only following what my predecessors were doing. I have no idea why the idols are painted in pure black colour,” said Muralidhar Senapati, the sculptor.

He said the idols are almost ready and final touches to the painting work are going on. As per COVID protocols of the state government, the height of the idols has been kept below 4 feet, he added.

The congregation of tableaus from 28 Sahis (lanes) across the city during 4-day puja is a special attraction of Bidyadharpur celebration. Thousands of people turn up at the place to participate in the puja and a festive mood grips the area these days.

Similarly, the immersion process here is quite different from other places. Instead of using any vehicles, the idols are taken in palanquins carried by the devotees on their shoulders.

However, the Kali Puja has been performed in a low key manner for two years and most of the age-old practices done away with due to the restrictions of COVID pandemic, said secretary of Bidyadharpur Puja Committee Prabhakar Nanda.