Vande Bharat Express: Running On A Wing And A Prayer 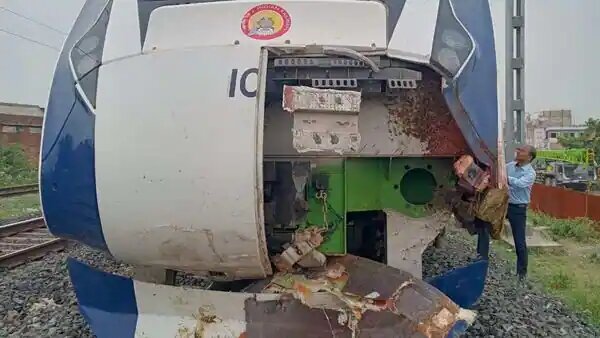 Two mishaps in three days. Browsing herds of cows and buffaloes mowed down by the high-speed train. The Railway Minister said: “The train has been designed in such a way that if there is an accident, nothing will happen, its nose on the front is totally replaceable. As soon as the train reached Mumbai the nose was replaced.”

Ashwini Vaishnaw added, “In India, the tracks are laid on the ground. Wherever you go, cattle will cross them, one cannot stop them. Unless we elevate the tracks in another 5-6 years, cattle will come in front of the trains. The trains will run at a speed of 120-160 kmph.. collisions are inevitable. It is a matter of common sense and design. Therefore, design it in such a way that you can mend it whenever there is such an incident. The next Vande Bharat trains will run at speeds of 200 mph.”

On Saturday, the Delhi-Varanasi Vande Bharat suffered a failure due to a bearing defect in the traction motor of a coach. Passengers were deboarded and shifted to another train at Khurja station, 90 km from Delhi.

Brave words from the minister, but the fact that nearly 100 cattle are being hit by running trains daily across the country is not comforting. Increasing number of stray cattle, more and more cows, buffaloes and bulls are found wandering on to rail tracks and coming under speeding trains, more so on high-speed routes. They largely go unreported, usually when the damage or delay caused to a train is insignificant.

Impact of cattle at high speed can cause derailment and also severely damage brake pipes and other equipment fitted on the undercarriage of a train. The loco crew is then faced with the gory task of extricating animal remains from the undercarriage of the locomotive, and inspecting for damage which is usually the brakes locking up.

The 1995 Purushottam Express accident at Firozabad, in which 358 people died, happened because it had rammed into the stationery Kalindi Express, whose brake was jammed after striking a cow. Just a day after its inaugural launch in February 2019, the Vande Bharat Express was stranded near Tundla. The nose panels had come off after a cattle run-over and the train had to be towed to Delhi. Hundreds of railway accidents involving goods train happen due to cattle runovers, but these usually go unreported as there is no loss of human lives.

While the number of general train accidents has been declining over the last few years, there has been a significant jump in cattle run-overs. From April 2021 till March 2022, there were more than 29,500 cattle run-over (CRO) cases on the rail tracks, whereas human run-over (HRO) cases for the same period were around 12000.

Cattle are roaming in the open because there are no buyers and many cow shelters are not operational. Since stray cattle destroy crops, farmers chase them out of their fields and the cattle go to open areas near the railway lines and come under trains.

The perception that strict laws, vigilante groups and crackdowns on slaughterhouses has saved millions of cows is wrong. The truth is, more and more old cattle, after being abandoned, are now coming under the wheels of Indian Railways trains. In other words, rail tracks have become the new slaughterhouses. The maximum cases happen in Uttar Pradesh and Maharashtra. In order to prevent CRO and HRO, the Railways has tried to fence off the track with concrete walls or barbed wire in areas that run through residential and semi-residential zones. The entire Delhi-Howrah and Delhi-Mumbai routes are slated to be fenced off with concrete walls.

Does India need high-speed bullet trains? Achieving a zero-accident railroad in India still looks unreal as we keep adding new trains, over-burdening the fragile tracks. Railway safety is quite abysmal if one sees the manner in which the Indian Railways maintains the massive length of rail tracks across the country.

The track maintenance is manually handled by an army of gangmen or trackmen. This workforce of nearly 200,000 trackmen walk along stretches of 5 kilometres each gang to check for defects when the tracks are very much operational and trains running on them. While the safety of millions travelling on trains depends on these trackmen, at least 400 of them die each year due to accidents.

Since 2004, the Polish National Railway (PKP) has introduced UOZ-1, or ‘key stimuli proxy’, a device emitting acoustic signals which create a fear factor in animals, deterring them from approaching the tracks. This mechanism was invented at the Natural Forests Department and has been hailed as cheaper and effective method of animal deterrence.

The gadget imitates naturally-occurring sounds, keeping animals away from the tracks. Such technology should be scouted by the RDSO (Research, Design and Standards Organisation) of the Railways and implemented. This will even prevent the nearly 100 elephants and other wildlife deaths that occur annually on the tracks.

According to Sudhanshu Mani, creator of the Vande Bharat train, “Replacing the damaged nose sections is not a large price to pay. The nose with even the strongest material would get damaged in cattle run-over cases at high speed unless some super-strong design was adapted, which would be prohibitively expensive. Use of a cattle guard would spoil the aerodynamic profile of the train and its inherent aesthetics. If we have to run these trains at its speed potential, fencing of track is necessary”.

Till that is completed, Vande Bharat trains will be running on a wing and a prayer.

Biotechnology In Odisha: Why It’s Important For Universities To Collaborate…