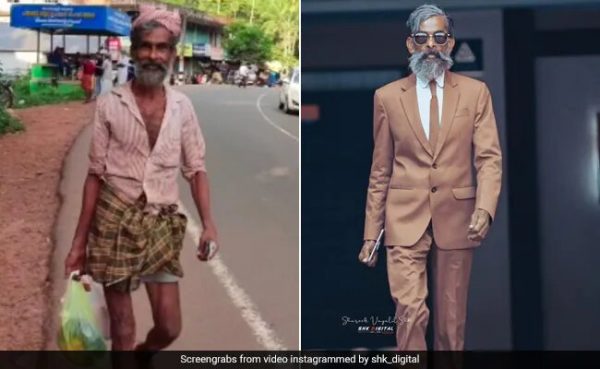 New Delhi: This world is full of surprises and they can come at any stage of one’s life!

Little did 60-year-old Mammikka know that from being a nobody working to make both ends meet, he would become an internet sensation.

Mammikka found instant internet fame after he worked as a model for a wedding suit company in Kerala’s Kozhikode district. Needless to say, netizens are impressed by his makeover.

Photographer Shareek Vayalil had posted Mammikka’s photo on social media. After the response he received, he decided to do a full-blown photoshoot and also gave Mammikka a sleek makeover, The Indian Express reported.

Vayalil shared the new video on his Instagram account. It captures Mammikka’s makeover and the process of the shoot. While he is seen walking through a street carrying vegetables in his usual style in the beginning, he later struts around the same area in a stylish blazer and sunglasses. A perfectly groomed Mammikka is also seen working on a laptop and striking poses for the camera. The 60-year-old man is a familiar sight in Koduvally area of Kozhikode, wearing a lungi and shirt.

Vayalil owns a wedding suit store, Your Choice, besides managing and owning Shk digital, a photography and videography studio in Koduvally, Kerala. This is what he told indianexpress.com over the phone, “After watching the video, people from far-flung places, including foreign countries contacted and congratulated me. We received rare reviews from Mammika’s wide network of friends. The clip went viral beyond my expectations.”

“Our friends or native people usually pose as model for our advertisements on billboards. This time, we chose Mammika and Majnas, a local salon owner, did his makeover. The video was shot in Hylite Business park. While Mammikka is adored online, he is busy with usual work and routine now. He is headed to work today.”

80% Of Children Afflicted With Cancer Can Be Cured, Say Health Experts In Bhubaneswar