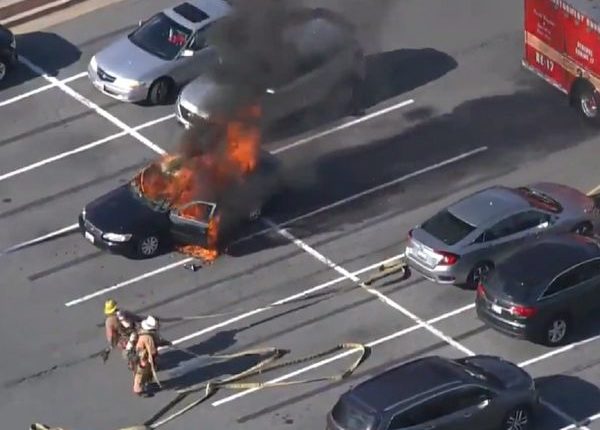 How careless can human beings get!

A man ‘set’ his car on fire by committing a basic blunder – using a hand sanitizer, while smoking and driving.

The incident, which took place in Maryland, US, left the motorist with severe burns after his car went up in flames.

According to reports, the man had a momentary brain fade that the sanitizer — a must-use product since the COVID-19 pandemic broke last year – had a high percentage of alcohol content. Since he was smoking, it ended up igniting the whole car.

A video of the incident shows the car engulfed in flames in an open parking lot as firefighters arrive to control the situation. Fortunately, the driver was able to escape in time and was left with minor burns.

Pete Piringer, spokesperson of the Montgomery County Fire and Rescue Service, shared a video of the engulfed in flames on Twitter.

“Vehicle fire; cause, a driver using hand sanitizer & smoking a cigarette, which is a bad combo in an unventilated area like a car; total loss,” he wrote.

He said that onlookers called 911 while the driver escaped from the vehicle.

“Hand sanitizer & lighted cigarette start a fire in an occupied car. The driver was able to escape the vehicle while onlookers called 911. The patient suffered from NLT 1st & 2nd-degree burns on his hands & inner thighs & transported to hospital,” wrote Piringer.