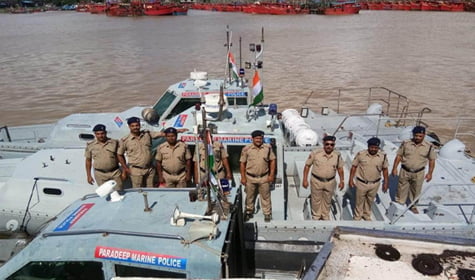 Paradip: The two-day joint military exercise ‘Sea Vigil- 21’ started off the Paradip coast on Tuesday. In the mega defence exercise, 18 Marine Police Officers, including the Indian Navy and Coast Guard, are taking part.

The mock drill of the massive defence exercise is being held along the 7,516 km long coastline and Exclusive Economic Zone of India. It is being coordinated by the Indian Navy and involves maritime stakeholders, including the Coast Guard, Customs, fisheries, fishing and coastal communities in all the 13 coastal states and Union Territories.

This exercise is a build-up towards the major Theatre-level exercise TROPEX (Theatre-level Readiness Operational Exercise), conducted by the Indian Navy every two years.

“Sea Vigil and TROPEX together will cover the entire spectrum of maritime security challenges, including the transition from peace to conflict,” the Navy said.

“Assets of the Indian Navy, Coast Guard, Customs and other maritime agencies will participate” in Sea Vigil, and its conduct is “also being facilitated by the Ministries of Defence, Home Affairs, Shipping, Petroleum and Natural Gas, Fisheries, Customs, State Governments and other agencies of Centre/ State”, the Navy stated.

The statement said, “the entire coastal security set up was reorganised after the 26/11 Terror attack at Mumbai which was launched via the sea route”.

Flight Services From Jharsuguda To Mumbai & Bengaluru Take Off