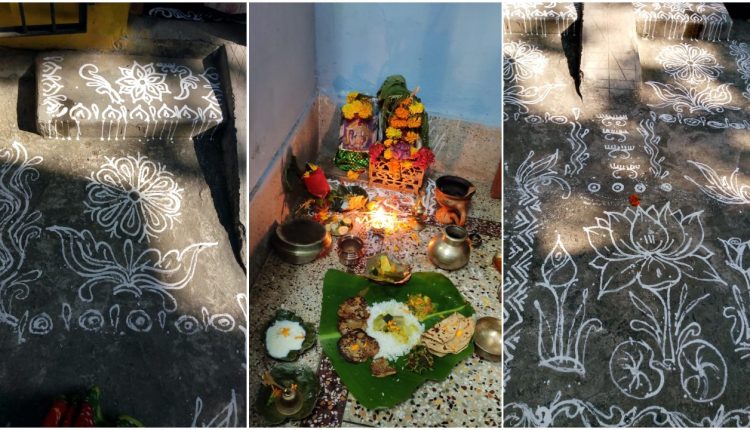 Sambalpur: “Mahalaxmi Namah Stubhyam, Namah Stubhyam Sureswari.” Every house woke up to the chant of this Mahalaxmii mantra accompanied by a ghanti and hula huli in devotion of Maa Lakshmi on Thursday.

Manabasa Gurubar is considered an auspicious occasion among married Odia women. Goddess Laxmi is invoked in every house every Thursday in the Hindu month of Margashira in Odisha. It is believed that the Maa pays a visit to homes during this month.

Womenfolk decorate the entrance to their homes with aesthetically designed motifs called Chita using semi liquid rice paste or pithau. The main Chita include ‘Laxmi Paada’  (feet) or lotus, the favourite flower of the Goddess and other beautiful creations.

Maduchanda Dash, a devotee said, “Today is ‘Adya Gurubar’ or the first Thursday of the month. We cleaned our house last night and put Jhoti or Chita from our entrance gate to the puja place. The rituals began early in the morning. We then invite Maa Laxmi to come to our house till our puja place or Khatuli, where Maa is bathed with turmeric, amla (Indian gooseberry) and raw milk, adorned in new clothes, lotus flower, amla leaf and duba. This ritual is called ‘Bata Barana’.  Then we invoke Mahalaxmi with a lamp and incense and offer three types of Naivedya in puja. First the Bala Bhog, then Sankhudi Bhog or Anna Bhog and in the end, Naivedya.”

“On all four Thursdays  we offer different types of delicacy as prasad. On the first Thursday, we start with “Rasa bara”. It is believed that when Maa comes for a visit, we should offer her different types of food like Pitha, Manda and Kheeri. Karehi Basaeba is a must. This prasad is distributed among the neighbours,” she added.

Trupti Dash, another devotee said, “This is a very sanctimonious puja for us. Every Odia family has its own belief system and puja rituals for today. Like we put one Kalash for puja, whereas my mother keeps five. Maa Laxmi is seated on a low table (khatuli). Newly harvested paddy grain of white colour is spread around her, then a mana (a measuring pot) is filled with rice and three betel nuts are placed over it. Flowers  are decorated and a coloured cloth is placed on top . Then we read the Mahalaxmi Vrat Katha and Mahalakshmi Mahatmya. Sri Mahalakshmi Aarti and Mahalaxmi Naman Ashtak are chanted on the day.”

This is an important festival as it is the harvest season when grain is thrashed and stored. The harvest of Kharif season is worshipped as Goddess Laxmi on this puja. It is observed in a meticulously detailed manner and there is a different flavour to it in different parts of Odisha. All four or five Thursdays of the Margashira month are equally important to us, said Minu Nanda.

The story behind it

According to Mahalaxmi Puran, once the Goddess Laxmi visited Shriya, a scavenger ‘low caste’ woman (untouchable) who cleaned places, for which Balaram, the elder brother of Jagannath (considered an  ‘avatar’ or incarnation of Lord Vishnu), got angry with her. He declared that she had been contaminated and ordered his younger brother not to let her in. She was therefore evicted from the temple of Puri, which is one of the four most sacred places of pilgrimage (Dham) for the Hindus.

Laxmi left the temple and avenged the insult by cursing her husband and brother-in-law to go through a prolonged ordeal without food, water and shelter. The brothers traced this catastrophe to their rejection and disrespect of Laxmi. They learned that the concepts of contamination and impurity made no sense to the Goddess of Wealth. Food will satisfy, without discrimination, the hunger of all, be it a sweeper, a king or a God. Eventually, Jagannath apologised to his wife and begged her to return to the temple.

Give Bhubaneswar’s Children Their Parks