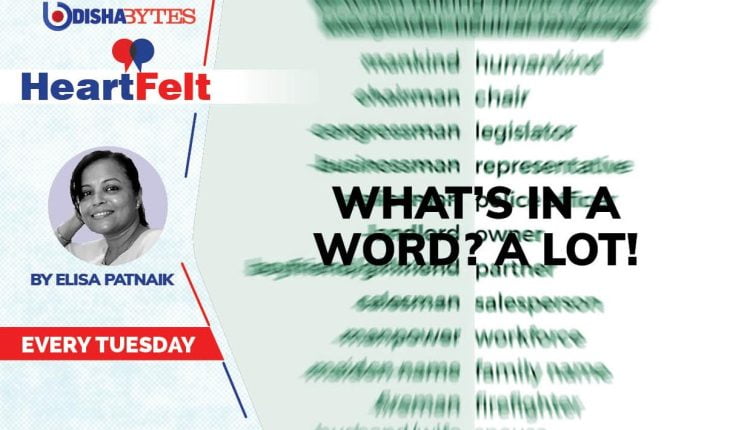 Is a person who is called a – Businessman, Salesman, Chairman, Crewman, Foreman, Policeman, Postman – only male?

And when we say Layman, Manpower, Mankind, Manned, Man-made, Landlord do we mean only the men?

Language not only reflects but also influences our thoughts, behaviour, and perceptions. A product of cultural and societal change, language is also supposed to represent the shifts in times and in turn the changing social and cultural norms and expressions. Patriarchy has historically prescribed male as the dominant gender, a construct that has been reflected and reinforced through language over the years.

Notwithstanding the changing times, certain words and expressions despite their gender bias, have become so embedded in our individual and collective thoughts that one doesn’t think twice before using them instinctively. Forget the uninitiated, insensitive or inconsiderate or unexposed folks, even educated, so-called liberal individuals and people in official positions or at workplaces are not mindful of how they speak and write.

I remember how a senior government official would refer to the largely female frontline workers as ‘manpower’ and the personal secretary of the head of an institution referring to his boss as ‘Chairman Madam!’ The sexist language is so common in India that we still use terms like female doctor and male nurse in our common conversations. Usually, our stereotypical mindset still thinks that the word ‘doctor’ refers to a man and the word ‘nurse’ refers to a woman.

In the English language, words having grammatical gender forms (actor, actress) and nouns ending in – man are used frequently. We also tend to use the masculine form by default, for example, “Every student must submit his certificates for admission.” However, this inherent ‘maleness’ of the language is being increasingly seen as discriminatory, biased and exclusionary as it discounts women and another gender in its expression and description.

Words such as policeman and chairman are gender-specific job titles. Their appropriate corresponding gender-neutral terms would be policeperson and chairperson. Similarly, using people instead of guys, humankind instead of mankind, human resource instead of manpower, human-made instead of manmade is gender-neutral. Also using the relative pronoun who and themselves instead of gendered pronouns like he/she or himself/herself is also being promoted to make all gender visible and inclusive.

Language is not only a means of expression but also a means by which our thinking and beliefs are shaped. Besides reinforcing patriarchy by perpetuating gender stereotypes, gendered language negatively influences cultural and social attitudes. When we use gender-inclusive language, we consciously choose words that are unbiased, non-discriminatory, and which respects and supports all genders. It is an effective way to promote gender equality and fight gender discrimination. Using gender-neutral language in our social spaces and workplace not only make people with different identities feel accepted but also set an example for others in making gender-neutral language the norm.

Words like businessman, postman, policeman etc. are gendered with the word ‘man’ included in them, thus completely overlooking women who are in these occupations. The use of these gendered terms perpetuates the notion that only men can do certain jobs or that certain jobs are meant only for men or women. No wonder, my 10-year-old daughter was pleasantly surprised to see a lady delivering our post.

The use of generic pronouns like he/his only also results in gender-skewed references and perceptions. We often see job vacancies and other formal application processes described in masculine language or gendered pronouns. This biased language may refrain or discourage other genders from applying for the same.

People usually use the word “he” as the default common pronoun to refer to bankers, scientists, engineers and she for nurses, school teachers and stay-home parents thus perpetuating the perception that certain professions or activities are meant only for a certain gender. This notion not only ignores the increasing presence of women in these fields but also inhibits the progress of the excluded genders.

But with growing awareness, people are gradually moving away from gendered terms and embracing gender-neutral language. The ways people use language can reveal and reinforce discriminatory stereotypes. Language can effectively be used to challenge prevailing norms and conventions. By embracing gender-inclusive language we not only convey that we value equity, but also help in advancing social progress for people of all genders. Even small shifts in how we use language is an acknowledgement of the prevailing gender bias and our attempt to include all genders.

Organisations across countries and now being encouraged and guided to adopt gender-inclusive language. Awareness around the use of gender-neutral language is growing and several governments have also been taking steps to implement gender-fair language in workplaces, educational institutions through policies and guidelines and also as part of everyday interactions. Japan Airlines, for example, has dropped “ladies and gentlemen” from its greeting announcement, changing to “attention all passengers”.

Merriam-Webster too declared the non-binary ‘they’ in place of the commonly used ‘he/she’ as the word of the year in 2019. Several workplaces, brands and media houses have started building awareness on using gender-inclusive language. In fact, several companies have started using gender-neutral pronouns for their employees. Google introduced a feature that no longer auto-suggests pronouns that indicate a specific gender along with gender-neutral emojis. UNESCO, for the last several years, has been bringing out guidelines on gender-inclusive language to promote inclusiveness and eliminate the inequality between binary genders.

Some organisations have also been encouraging the use of terms such as partner or spouse to husband or wife and parents to mum and dad. People are now being asked the preferred names, titles and pronouns, gender-neutral titles, allowed to designate their own gender to promote a more gender-inclusive culture.

However, though English users have started using gender-neutral language, it has not extended to the regional languages. In the Hindi language for example, where every Hindi noun has a gender (masculine or feminine) it is challenging for non-binary individuals to express themselves. As gender identity and expressions are unique in every culture, the language around them is still limited. The English and Western definitions of gender differences may not be appropriate for all regions and countries. Moreover, it is easier to adopt a gender-inclusive language in English because of easily available templates and guidelines. Many regional languages do not have appropriate equivalents for such English words.

Not just in our individual daily and official usage, the need for using gender-neutral language across sectors like governance, law, is being increasingly realised to offset the male construct, through which the directives and policies are viewed and implemented. Documents in many systems and organisations are written not only from a male perspective but also structured within a male framework, that usually excludes women and the other gender.

Though many may dismiss the need for the adoption of gender-neutral language as trivial, unnecessary, or ideological, research shows that using gender-neutral pronouns increases positive attitudes towards women and LGBTQ+ people by reducing the dominance of the male identity thus leading to less gender discrimination.

Kerala and Odisha Government’s decision to audit and revise school textbooks to make them gender-neutral to inculcate a culture of gender equality are welcome steps in this regard. Just altering the words – from postman to mail carrier, from stewardess to flight attendant, from salesman to salesperson and mankind to humankind in textbooks can create a positive influence on young minds in schools.

Language is always changing and will continue to change. The over or under-usage of seemingly mundane words are taken for granted but it represents the deceptive ways in which language perpetuates conventional social constructs and stereotypes. Like all other forms of gender discrimination, we also need to identify and acknowledge this bias in language.

The way we speak and write is influenced by our thoughts and worldview. We as individuals should be conscious, proactive, and sensitive about our choice of words and their usage to include all genders.  And beyond our individual selves, our actions can be political too.

Post-COVID Complicacies, A Matter Of Concern In Odisha, Says Expert

Coal Crisis: PM’s Intervention Sought To Save MSMEs From Closure In Odisha

Honouring Your Own Self