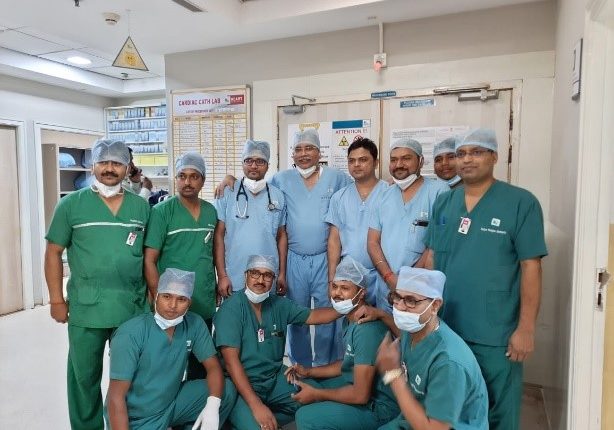 The doctors of Apollo-Bhubaneswar have performed TAVR on two senior citizens during the month.

has been done successfully by a team comprising of interventional cardiologists, cardiac surgeons, cardiac anaesthetists and cardiac intensivists at Apollo Hospitals, Bhubaneswar in two patients recently.

The first patient was a 81-year-old man who had a bicuspid aortic valve. This was replaced with an Indian valve on through the groin. “This was the first case of Bicuspid Aortic valve undergoing a TAVR in Odisha as well as eastern part of India especially with a ‘Made in India’ valve ( MYVAL),” said Prasant Kumar Sahoo, Director, Interventional Cardiology , Apollo Hospitals, Bhubaneswar.

The second procedure was performed on a 70-year-old man. In this case he already had an aortic valve replaced with a bypass surgery 10 years back at Apollo Bhubaneswar.

“This time he was considered a ‘very high risk’ case for a redo surgery, so had his valve re-implanted (Valve in Valve procedure) along with stents to both his major coronary arteries, which were also blocked critically,” Dr Sahoo added.

Both the procedures of coronary stenting and TAVR were done simultaneously. The VIV (Valve in Valve) procedure was done with a valve from USA which is again a first time for our state also along with the coronary artery blocks being dealt in the same sitting, he added.

Surgical replacement of these valves are risky considering multiple comorbid conditions like diabetes; hypertension etc present during these age groups. The surgical risk involved in this age group is also high. So, a paradigm shift has been to replace these damaged or degenerated valves without surgery, Dr Sahoo stated.

[Watch] ITBP Jawans Celebrating Holi At A Height Of 17,000 Feet

COVID-19: This Odisha District Bans Entry Of Outsiders To Check Surge In Cases