Twenty years ago, Arun Ojha of the non-descript Barigaon village in Keonjhar district quit his job as a young lecturer in economics to experiment with papier mache (the French word for chewed paper) craft. Two decades later, his artistic adventure has reaped him rich dividends. His artistic excellence has earned him and his state of Odisha a distinct recognition.

While Kashmir, Tamil Nadu and Madhya Pradesh were famous for the papier-mache craft tradition, Arun’s creative and innovative products, especially his two-dimensional artworks, have put Odisha prominently in the craft map of India today.

The Government of India has awarded him a Senior National Fellowship of the Ministry of Culture. The Ministry has also recognised him as an expert of his craft. He is also a recipient of the Odisha State Design Award and the Most Innovative Design Award. He has represented Odisha four times at the India International Trade Fair in New Delhi. The National Institute of Fashion Technology has invited him as an expert for its countrywide Craft-Bazaar series while the Government of India has included him under its prestigious Guru-Shishya Parampara programme to train aspiring papier-mache artists.

You studied economics and became a college lecturer. But, finally, you took up craft as your career. Was it not a delayed decision?

Although I was an art enthusiast since childhood, I am an artist by accident. I did not belong to a traditional family of craftsmen. I studied economics and became a lecturer in it as three members of our family were already into the same subject and profession.

My uncle was a papier-mache craftsperson. I had seen him at work for several years. Once I accompanied him to visit a famous crafts village near Puducherry that is known for papier mache products. I realised then that there was an urgent need to redesign the traditional products made by my uncle to cater to the taste of the changing times to sustain and enhance the demand of the products. But my uncle did not appreciate my idea on the plea that it was against tradition.

Thus, I started experimenting on my own and made some utility-oriented products like pencil boxes, pen stands and flower vases that received a rave response from art lovers and prompted me to venture further. Then I realised that I have finally found the right kind of profession where my heart lies.

Was it not a misadventure to quit an assured job to be a craftsperson?

Yes, it was. In fact, my well-wishers had warned me then to refrain from taking craft as a career. “You would reap the consequences of this whimsical decision in future”, many had said.

But I could not resist my heart’s calling to go ahead with my creative journey with papier mache after art lovers appreciated my experimental products. Fortunately, our family members supported my adventure and I could carry on.

How is your style or technique different from others?

I used the technique of papier-mache to create two-dimensional art pieces in addition to the commonly seen three-dimensional products. Traditionally, artisans were crafting out figures of gods and animals. But I experimented with the form, theme, texture, colour scheme and technique using different materials and processes to make my products trendy.

I also try to make my products utility-oriented, eco-friendly, durable, biodegradable and portable for long-distance dispatch. 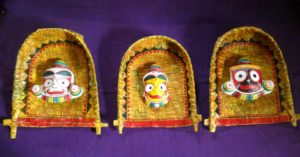 How old is the papier-mache tradition of Odisha?

Research reveals that papier mache craft was invented during the early 3rd century in China where paper was also invented. However, the craft was introduced to India by the Persians in Kashmir in the 15th century. Puri is known to be the birthplace of Odisha’s papier-mache tradition. A number of art and craft traditions were born and flourished in and around Puri due to the Jagannath Temple and its traditions like the annual Rath Yatra as the pilgrims who visited this holy city used to carry back home such craft products as souvenirs. So Odisha’s papier-mache tradition is as old as the Jagannath Temple tradition.

Did you drift away from the tradition?

My kind of work is innovation within tradition. I have not broken the tradition but have tried to enrich it with my experimentation. Any art tradition must evolve with time. Else it will stagnate and get outdated with the changing trend and time.

Since I am from Keonjhar district that has a rich tribal culture, my art and craft is naturally influenced by tribal culture. My products depict the lifestyle of people of my region. So, it is a natural addition to the tradition of papier mache and not a deviation.

Which of your products is most in demand?

I have made a range of 35 kinds of products so far of which wall decorations with tribal motifs, tiny jewellery boxes, kula (winnowing fan) for ceremonial use, key hangers and pen-pencil boxes have been in greater demand. A large number of wall decorative works were exported to Australia recently through the Government of Odisha’s Utkalika chain of outlets. 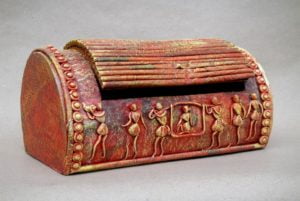 Why did you decide to settle down in your village while cities offer multiple opportunities for your kind of vocation?

I preferred to work in my village as I did not wish to enter the rat race of marketing to earn more money to survive in a city. Since I was more focussed on experimentation and creativity, I required a peaceful and economical work environment. Village life offers that ideal setting for creative people where living does not need a lot of money.

How challenging has been your journey as a craftsperson? Do you ever regret your decision of quitting the secured life of a college lecturer?

It has been quite challenging to survive financially as an independent craftsperson. I have gone through the usual struggle that creative people have to go through.  But the struggle was worth it and hence no regrets.

Papier-mache has earned me a special identity today. Additionally, what brings me the greatest joy and pride is the identity that our village is getting for this craft. The artefacts made by the ordinary women of my village who work with me at my Kagazi Odisha Papier Mache Production and Research Centre have found a respectful place in the homes of art-lovers across India and abroad.

I could not have aspired for more.

Konark Dance Festival From Tomorrow, To Be Aired Live On Social Media