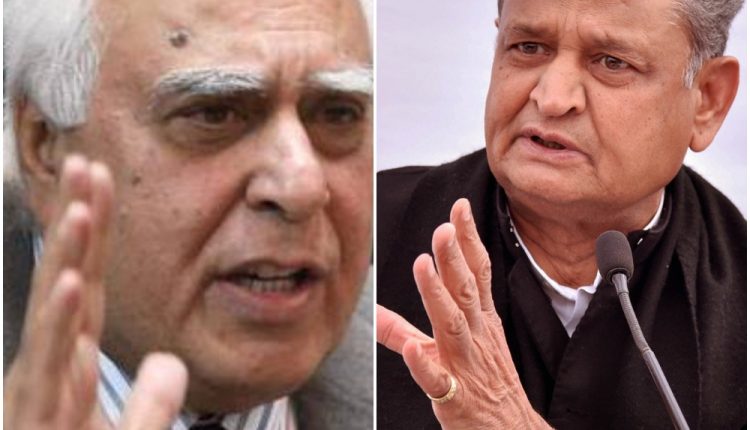 Bhubaneswar: On a day when veteran Congress leader Kapil Sibal said Gandhi family should step aside and give a chance to others to lead the party after the debacle in the just concluded Assembly elections in 5 states, Rajasthan Chief Minister Ashok Gehlot launched a scathing attack on Sibal.

Commenting on Sibal, a prominent lawyer of the country, Gehlot, a die-hard Gandhi family loyalist, said the former has forgotten the opportunities offered by the Congress to him to build his career.

“He is a very big lawyer, a respected lawyer of the country. Those who enter Congress have to struggle to reach the top, unlike Sibal. With the blessings of Sonia Gandhi and support from Rahul Gandhi, he was able to climb the party ranks without much struggle,” India Today quoted Gehlot as saying.
Stating that leaders like Sibal do not have roots in Congress culture, the chief minister said, “These people don’t even know the basics of Congress. Does he keep forgetting the history of Congress?”
Gehlot said it was the Congress which gave Sibal a berth in Union Cabinet and made him its spokesperson. “No member of the Gandhi family has become a chief minister or a prime minister in the last 30 years. The entire country knows that the Congress can be held together with only the Gandhis at the top,” he added.

Earlier in the day, Sibal, who is a member of the Congress’ G-23 faction – a group of 23 leaders who have been demanding change in the party leadership – said the party leadership was living in “cuckoo land” if it is not aware of the reasons for the party’s decline even after eight years.

His response came after the CWC turned down the offer of party president Sonia Gandhi along with Rahul Gandhi and Priyanka Gandhi Vadra to step down on Sunday following the party’s debacle in the Assembly elections in 5 states.

Another Man Falls Victim To Cyber Fraud In Odisha