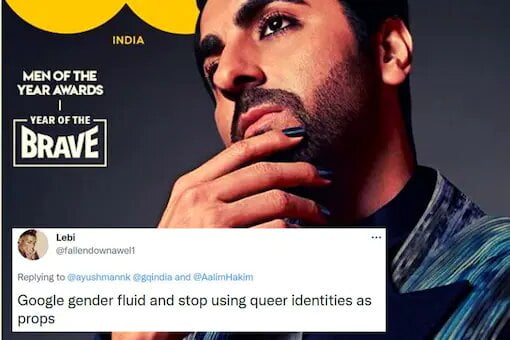 New Delhi: Actor Ayushmann Khurrana has appeared on the cover of GQ. He can be seen sporting nail polish and kohl. He shared the photo on Instagram on Tuesday.

Netizens would have welcomed his gender non-conforming and androgynous fashion statement had it not been for his “gender fluid” caption to the post with a heart emoji. Many, including queer groups on the Internet, found it offensive on the grounds that applying nail polish or wearing any kind of gender-neutral fashion does not make one gender fluid, which is an identity in itself, regardless of fashion. When done by a cisgender heterosexual man, as is being presumed to be the case with Ayushmann since he has made no public statement to the contrary, it veers towards appropriation of queer identities, and in some cases, might even contribute towards queerbaiting.

Queer groups have called Ayushmann’s usage of the words “gender fluid” appropriation of marginalised identities. Ayushmann seems to have since deleted his tweet, but the Instagram post is up on his profile, News18 reported.