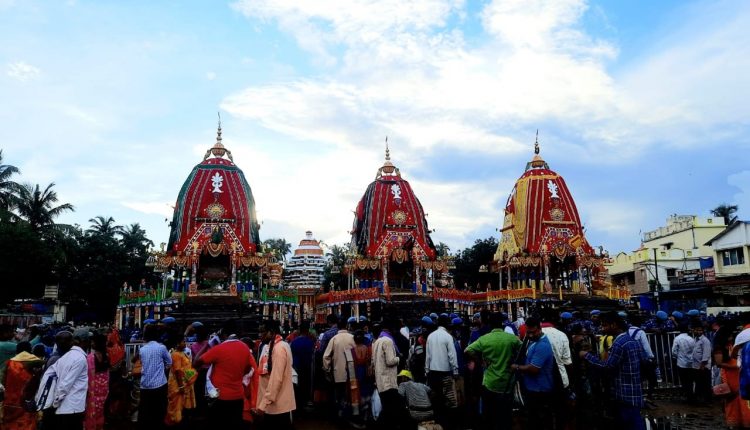 Puri: The ‘Bahuda Yatra’ (return car festival) of the deities of Jagannath Temple in Odisha’s Puri town has begun at Gundicha temple.

As part of the rituals, the three deities – Lord Jagannath, Lord Balabhadra and Devi Subhadra – were being brought in ‘Pahandi Bije’ (grand procession) from inside the Gundicha temple to their respective chariots. The deities wearing majestic ‘Tahia’ (crown) were taken on their shoulders by the servitors in a swinging manner.

Lord Balabhadra was the first to climb his chariot ‘Taladhwaja’ amid chanting of slokas, blowing of conches and beating of cymbals. Devi Subhadra was the next to be brought to her chariot ‘Darpadalana’. Till the report was filed, the ‘Pahandi Bije’ of Lord Jagannath was being performed to be taken to his chariot ‘Nandighosa’.

Lakhs of devotees coming from across the state and outside have congregated at ‘Bada Danda’ (Grand Road) in the Pilgrim Town from early Saturday morning with many staying overnight to have a glimpse of the sibling deities atop their chariots.

The district administration has made adequate security arrangements for security of the devotees while the local administration has put other facilities like supplying drinking water and health department has kept ambulances ready to shift anybody who would fall sick.

The Indian Railways is plying a record number of 230 trains for Bahuda Yatra and subsequent ‘Sunabesha’ of the Lords as part of the annual Rath Yatra.