Bhaja & Karla Caves: Deep Etchings On The Face Of Time 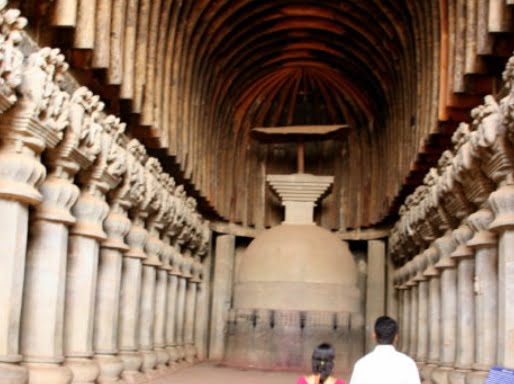 Most of the citizens of Delhi must have seen the Taj Mahal in Agra, a good 200 km away. But only a few must have seen Humayun’s Tomb in Delhi, which not only is said to have inspired a later date Taj Mahal but is so impressive and important that it too like Taj Mahal, carries a UNESCO World Heritage tag. Similarly, the rock-cut wonders of Ellora and Ajanta caves in Maharashtra draw such huge attention from travellers, that many little gems just remain unnoticed. Which is a blessing in disguise in some sense for a traveller (like me) who is always looking for non-touristy places. The Karla and Bhaja rock-cut caves in the western Indian state of Maharashtra, near Pune, are among such splendid gems that, thankfully, remain lesser known.

What exactly are these ‘Rock-cut caves’

India, having a very rich past, has a few such examples of rock-cut architecture spread all across, especially on the Deccan Plateau.

For the uninitiated, rock cut architecture, such as the Petra in Jordan (it is one of the wonders of the world), are structures that are created by cutting into sheer rock faces. The epitome of such structures in India is the Kailash Temple of Ellora (in Maharashtra), which, in my opinion, is meritorious enough to be listed as one of the Wonders of the World.

In case of Bhaja and Karla, and many other such structures, rocks are cut deep to create what is commonly called as caves. These caves are generally of two kinds. One, a chaitya or a prayer hall, a sort of a temple where Buddhist monks, Jain Monks or Hindu priests used to pray. The other type is called Vihara, which is where the monks and priests used to dwell or live. As expected, the Chaitya’s are elaborate, grand and ornamental structures. Whereas Viharas are plain, often with a low ceiling and without any ornamentation. Each set of caves have both the varieties. Other things you will come across are the stupas. They are solid structures shaped something like inverted bells. They either contain the relics of past senior monks or are representations of Buddha. These stupas are too cut from rocks and are either inside the chaityas (as a centrepiece) or outside.

Bhaja caves are so named as they are located near a village called Bhaja. You lose a sense of time the moment you step among these caves which were cut out from solid rock in 2nd century BCE. Which makes them older than Ellora caves.

The beauty of Bhaja caves in their comparative isolation. Though it also has to be said that they are one of the better examples of rock-cut architecture anywhere in India. The central Chaitya is very impressive. Though made of solid stone, it is designed like a wooden edifice which was how houses or places were during those old days. Its design is also inspired by Greek Architecture, which was flourishing during those times as Indo-Greek such as Milinda (or Menander I in Greek) ruled Northern India.  Also interesting is a group of small stupas placed in a huddle (14 in all). They are considered to hold relics some of the monks who lived and died in Bhaja caves.

The main central Chaitya of Karla makes it stand out. This is the biggest Chaitya in India. It is so impressive that it is considered second only to Ellora’s main Kailash Temple, in scale and workmanship. Great Chaitya at Karla, built in 150 CE, is the largest rock-cut chaitya in India, measuring 45 metres (148 ft) long and up to 14 metres (46 ft) high.

The way up to the Karla caves is again through a stone path with intermittent steps. But unlike in Bhaja, the way up in Karla is way more happening, busy and colourful. There is a temple to a local goddess right at the entrance of the main Chaitya. It is a popular temple and the local folks visit it in good numbers. As a result, the way up is lined with a host of stalls selling knick-knacks, snacks and drinks. All this adds a lot of colour and festive atmosphere to the Karla caves, unlike Bhaja which shines in its solitude and peace.

There are a lot of sculptures to admire in Karla, on the walls and on top of great columns of the main Chaitya. There are some great life seize rock-cut elephants too. It is said that in the old days these elephants had real ivory tusks. The ivory is long gone now, but yes, you can still see the sockets where they were installed as proof.

The Karla caves are considered the last great flourish of a tradition of building such caves in western India under royal patronage. It started with Kondivite Caves, then followed with Bhaja caves, Ajanta Caves, Kondana Caves, Nasik Caves and finally Bedse caves.

In fact, Bedse caves are also worth a visit. They draw much fewer visitors as compared to Karla and Bhaja. It is just a distance of 22 km between Bhaja and Bedse. by car. Both the caves face eastwards so visiting them early morning is a good idea with Sun lighting them up for you.