Bishnupur – An Enchantment At Every Turn 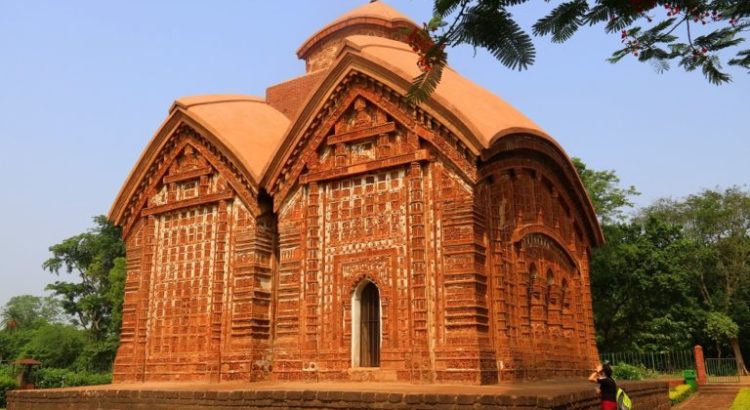 here is so much beauty at every turn in Bishnupur that you may feel that you have walked into a wonderland. The thought that an ordinary looking quaint little town could hide in its folds so much beauty, feels totally unreal. But it is all there. You walk around, looking at all the greenery interspersed with modern houses, and suddenly at the next turn, you are faced with a sublime creation in terracotta bricks or laterite stones. Its form is beautifully curvaceous, patterns on it are intricate and its walls tell the stories of old epics. These are the famous temples of Bishnupur.

The town of Bishnupur, in West Bengal, other than the temples, holds something of special interest to the ladies. It is a place where the famous Baluchari Sarees are made.

Bishnupur is identified with the Terracotta horse of Bankura. It is a stylized creation of horse which is available in many shops in Bhishnupur in many sizes. It has achieved worldwide recognition as the symbol of Indian Handicraft and is the logo of Central Cottage Industries Emporium. It is made by the artists of Panchmura Village (10 kms from Bishnupur). The horse has a long neck, is hollow and has some circular vents to facilitate uniform firing in kilns. The horse is used by the local people as an offering in the temples of various local deities.

Bishnupur is located around 140 kilometres from Kolkata, the capital of West Bengal. It is situated in Bankura district of West Bengal, which neighbours Purulia (of the Chhau Dance fame and the infamous ‘arms drop case’), which in turns borders the Indian state of Jharkhand. We drove down to Bishnupur from Kolkata. Half of the way was an eight lanes toll road. After that, we entered a narrow state road but the road surface was good.

The temples at Bishnupur were built by Malla kings, the rulers of the area in the 17th and 18thcentury. The land was also called Mallabhum after the rulers here. Judging by the numbers and scale of the temples, one feels that the city must have been an important place in the past.

The rulers worshiped Vishnu and his two important reincarnations, in Krishna and Ram. As a result, most of the temples are dedicated to Vishnu, Krishna or Ram. The outer walls of the temples, have intricate carvings and sculptures, mostly depicting scenes from the epic Mahabharat, where Krishna was the main protagonist. Similarly, Ram’s epic story of Ramayana  is also depicted in carvings.

The local people told me that the town had an excellent water management system in place. The rulers here have created a number of water bodies by damming small streams or catching rainwater. Most of these water bodies were linked together and took care of the water needs of the city throughout the year. One such water body called Lal bandh still exists. But some others have fallen prey to the greed of the builders and have been filled up recently, the land being sold off as housing plots.

There are remains of impressive gateways, palaces and fortifications walls in and around Bishnupur, giving an enchanting feel. There is one big canon called Dalmadal Kaman on display in the city centre, which is supposed to be used to protect the city during the Maratha Raid.

The temples with their reddish brown hues and intricate work on the exterior walls, are a mix of Bangali, Islamic and Oriya styles.

Some temples are made of bricks and some are made of laterite stone. The architectural style of the temples is deul style, ratna style and chala style.

The basic Ratna style temple design has a temple with a shikhar or a tower like a spire on top. If the temple has one spire, which most have it is called Eka Ratna temple. The earliest example of this style is the Kalachand temple on the south bank of Lal-Bandh lake. You would find most of the single ratna temples as similar.

Then there are temples with five spires, which are called panch ratna style. The Pancha Ratna style, Shyam Rai temple has one of the best sculptures and designs.

Jor Bangla temple is another impressive and also a unique creation. It is a pure Chala style temple. Chala style is unique to the old Bengali style, where the main body of the temple is shaped after a thatched roof hut which is prevalent in rural Bengal. You will see this chala style in many other temples in Bengal. In Bishnupur also you will see this Chala style repeated in many temples, where the central temple is made of the Chala style with spires on top of it. Jor Bangla has most intricate work done on its outer walls too with scenes from Ramayana and Mahabharat.

It is fun finding out popular scenes from these epics on the temple walls. The depiction of Ravana with his multiple heads and arms is most impressive. In Panchratna Shyam Rai temple I also saw an image of Sita on the verge of entering a fire to prove her chastity, a well-known episode from Ramayana.

The third style is the Duel style, with a soaring curvilinear shikhar, which is also known as the Nagara Shikhara style. This style is prevalent in the old temples of Himalayan states, such as in Jageshwar, near Almora, Uttarakhand.

There are a total of 32 temples in Bishnupur, with 22 of them under the protection of Archeological Survey of India (ASI). I must say that the Central Government agency has done a good job of preserving, protecting and maintaining these temples. All the temples protected by the ASI have well maintained grassy lawns around them.

The first temple you should visit is the Ras Mancha. Built in 1600, it has an unusual pyramid structure with three circumambulatory arched galleries running around it. I have never seen anything like it in India. During the days of the Malla kings, all the idols worshiped in Bishnupur temples were exhibited here during the annual rasa festival.

In the middle of the Bishnupur town is a modern temple dedicated to the Chhinmasta. Which means a goddess with her severed head.  Chhinamasta is a cult tantric goddess. Her image always shows her with a severed head, with a stream of blood coming out of the neck, which the deity is herself drinking from her head, which she holds in one of her hands. While doing this act she is always shone standing over a couple in a sexual act. It can be a disturbing sight for the kids, but it is very interesting for grownups. The philosophy behind this form of deity is very interesting to read.

-Ras Mancha is the only temple where you get the tickets which can be used to visit all the other temples on the same day. So it should be the first one you visit.

-if you have time and if weather permits and if you are fond of walking, then walking around is a good way to visit the temples. Most of the main temples can be covered walking. If you have your own car, then you can drive to all the temples.

-other great option is to take the cycle rickshaw. The rickshaw driver would take you around most of the temples.

-The staying options in Bishnupur are a few and basic. Do book the West Bengal hotel in advance. It is a huge property and fairly well maintained.

-the best way to visit is for a night stay. So that you could see the temples in the evening and then in the early next morning. These are the hours when they look the most beautiful and at their most picturesque. The temples are open from sunrise to sunset.

-Do keep some time to see the Baluchari Saris in a few showrooms in the town.