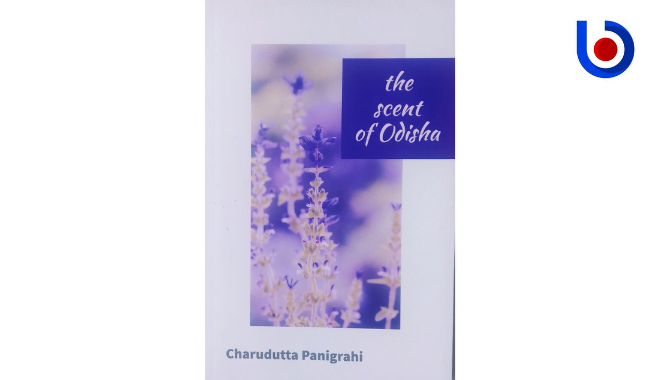 “Restless to present Odisha to the globe, this is an invite to Odisha, holding up a candid collage of disparate features, says the blurb of this fascinating book. As one who was witness to the book happening, I can be safely say that readers deserved a book like this. ‘The Scent of Odisha’ by Charudutta Panigrahi, far from being a collection of feature articles, is a statement, an exploration   and a quest for all that is respectable and distinctive in this part of the land.

A fount of knowledge, writing is Charudutta’s love of life. Fertile with ideas, he spends time in the interior of tribal communities. When not sitting at erudite high tables, he rubs shoulders with the lowly and engages in thought experiments. Founding think tanks in India and abroad, advocating social courage in TED-like platforms, shaping positive activism for indigenous population and rallying for responsible business, Charudutta is an Odishaphile.

Call them heartfelt scribbles or random diaries and notepads, the pieces in this book – with a lovely cover –   just flow straight from the author’s heart. The sixty odd articles brim with emotions. Love for one’s land, love for life, and hope are part of the narrative. Most of the features are annotations of our behavior, the governmental system we live in and have to put up with, and the many facets of our social peculiarities.

As for Bhubaneswar Smart City, the book says: ‘Bhubaneswar is a blessed city with a terrain which can help design it like a hill city. But it is late. The skyscrapers can be confined to a particular part of the city and not poke their heads unpleasantly in every corner. Bhubaneswar overall can be kept low rise. The commercial area can be separated from the residential areas. This one move could make Bhubaneswar much cleaner, overnight. We need a Smart City as an urban space that is livable and ecology-friendly, technologically integrated and meticulously planned with the use of information technology.’

On Kala Bhoomi or the crafts museum in Bhubaneswar, he says, ‘Odisha needs to promote art and crafts in an innovative style, more oriented towards the future. Kala Bhoomi has the panache to take us back to the future. The bandwidth needs to be built. The civil society organisations of Odisha should lend a hand to the management of Kala Bhoomi. Kala Bhoomi can contribute to the ‘Look East’ policy of the governments.’

Charudutta captures the fragrance of Odisha in no uncertain terms when he says:  The Scent of Odisha is peculiar and quite different, and yet not mulish. Scent knows no border and Odias know no delimitation. This cosmopolitanism of Odisha has a fragrance which has the high and low notes, the steadfast & discursive narratives, the ingénue & chic souls and all the variants to make it a full-bodied fragrance.”

His adoration of the brilliance of Odisha artistes is prominent in the book. Suggesting that Akshaya Mohanty deserved more from his fans and that our adulation is only superficial he writes, “Akshaya Mohanty is omnipresent in our lives–from WhatsApp, FB to events & all kinds of music banters, non-music khatis, everywhere across three generations. He is supposed to be the king of Odia modern music, the fountainhead of modernity and out-of-the-closet romance in Odia music. Some of us believe he was much more than only a musician or a music maker. He made every Odia household spread their wings, break the staid middle-class coyness, and he himself was larger than life. He was the trendsetter, a maverick personality, then quite rare in a bottled-up society.”

Paying tribute to yet another great singer Balakrushna Dash, he says: “He defied the norm that ‘urbanites mainly compose modern music’. From a humble background, Sangeeta Sudhakara Balakrushna Dash reached heights in Odia music in all forms – filmy & non-filmy. So confident he was of his craft that even in the big city Calcutta he was not shy or gauche. The overwhelming Bengali music and film didn’t wean him away from legitimate Odissi, Chanda or bhajan (devotional songs). His career (singing to begin with) took off at Calcutta, but he maintained his Odia exclusivity, and never inveigled himself into the Bengali wave.”

Dedicating the book to Koraput and the simplicity of the indigenous community, he writes:  “It is here that everything has started, even fourteen billion years ago, and it is here that the next centuries are being crafted.”

If good vision makes good politics, our politicians have been lacking this value. Charudutta laments this and asks: “When do politicians get to plan their contribution to a better India? They are perpetually engaged in chores which should be ideally handled with the help of their teams –constituency matters – which translate to recommendation for jobs, transfers, and posting preferences in bookings, individual or community litigations, etc. They should concentrate on policy making, situational assessment of livelihoods, welfare activities, development project(s) ideation, proposal preparations and proactive constituency development in the lines of competitive federalism.”

Rooting for a Ministry of Thinking, the book says:  “Time has come when we, as the youngest community of the world, need to institutionalize thinking. An exclusive Ministry of Thinking should be mandated with enhancing the thinking power of the country, infant onwards. This Ministry alone would have the potential of changing the face of this country, increasing its endowments, and making it the fountainhead of human development. Our Ministries – HRD, Education, Social welfare, Social Justice, Women & Child, Science & Technology, and others have not been able to work on our foundation, i.e., our imagination. They are still at the periphery, even after 7-8 decades of relentless need for new thinking. Human minds are meant for creativity, but we have kept them asphyxiated.”

The 300-page book contains some interesting chapters, and the dialogue is multi-dimensional. There is a chapter on the much-touted Mo Sarkar, one on intellectualism and Odisha and even the new-fangled concept of social distancing. From Mission Clean Puri to the Gram Sabhas, from CSR to Atmanirbhara Bharat to migrants, from the national education policy to the controversial Kotia panchayat, from clean energy to climate change there are hosts of topics which are contemporary, contentious and central to the governments both at the Centre and in Odisha.

Charudutta’s vision of Odisha is inimitable. “We kick off a large-scale program on Odia mindset change, in the state and among the diaspora. This should be a rigorous community-based program in the lines of behavior change initiatives in health sector interventions. Faith in one’s self and fellow selves is the biggest upliftment charter for all of us. Each one of us should develop the self-esteem of minimum 10 youngsters in our circles–from IT hubs & diaspora to migrants and own siblings and children…..Spread the word around about Odisha, its legacy, the scopes it offers and the bonding it can forge to contribute to the national GDP and national character. We are a land of comity, amity and soft power, but should be result and evidence backed,” he writes.

‘The Scent of Odisha’ is a must-read for all those who love Odisha and its people.

A Bhubaneswar-based writer and journalist. He also reviews books.

Maharashtra Weekend Curfew: Will It Affect IPL Matches In Mumbai?