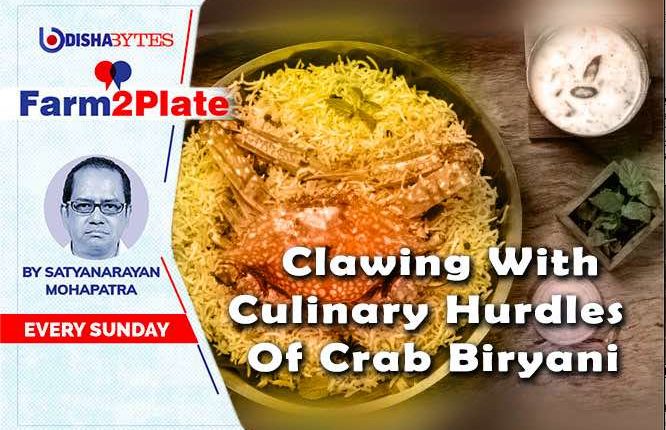 Seafood especially Crab Biryani, a one-pot meal, has now become a fad. Crab Dum Biryani is a must-have in the list of foodies. Here, the star ingredient is the thick-skinned chillies used with the pith holding the seed for the pungency, which gives the biryani a special flavour. The crab meats with chillies have the yin and yang sync.

Crab Biryani seems quite easy to make but has its own culinary hurdles. A few fresh crabs, rice and a mix of the right spices with an hour plus of cooking time over dum are enough to make this dish.

Biryani is a Parsi word which means fried before cooking and it has also been derived from Brinj, which stands for Rice. Biryani originated from the kitchen of Moghul Emperors – a rice dish, a full meal in itself or can be served as a part of a special meal. Initially, this dish was prepared only with meat. With time, people started using other ingredients such as seafood and vegetables in biryani and people have started accepting the variations as well.

Different states of India have their own way of making biryani, but people have their own way of preparing with their own proprietary spice mix. One of the biryani variations, which is getting popular is the seafood biryani made with a single type of fish or crustacean or a mix like fish, prawns, mussels, scallops, squids, and crabs. Seasonal vegetables like peas, potatoes, cauliflower florets, zucchini, carrots or whatever is available in the season can be added to it.

Vegetables play a major role in absorbing the smell of the piscine or the reeking odour while preparing seafood biryani – crab biryani. If this biryani is making headlines in other regions of India, can Odisha be far behind?

Crab Biryani has reached Odisha in the Biryani platter and is making a mark within a niche segment of food connoisseurs. The first mover entrepreneur is Tapas Sahoo, a Chartered Accountant by profession. A foodie to the core hit upon the idea after he had Sea Crab aka Blue Crab when he was stationed in Paradip for his financial audits. He had the taboo of not having dead crabs as food. He was introduced by one of his confreres, to these sea blue crabs. He then got hooked to the blue crabs and tried out all variations of dishes. Little did he know that he will become foodpreneur, with crab being the main ingredient? The crab plus rice coalescence of biryani came to his mind when he was in Hyderabad. Finally, he took a plunge – gave up his CA licence and started his own outlet popularly known as Scrumptious Biryani.

His audit skills have paid off well in his start-up – having the best of the line kitchen, strong hygiene and food production SOP and workflow with the go green packaging (biodegradable). The Crab Biryani is a taste to reckon with the tingling of the soft crab meat and munch of the shell. His other variants are chicken biryani with only wings and chicken drumsticks. Vegetarians have one option of paneer biryani.

Though we may curate new foods, each ingredient used while preparing needs a lot of sensory evaluation – like saying one man’s food is another man’s poison. This is true for Crab Biryani, especially when trying out with Sea Blue Crab – as it is difficult to procure live crab for this dish. This sea food biryani, especially with crabs, has its own bouquet of challenges.

Care to be taken while preparing Crab-based dishes

While preparing crabs especially sea crabs, it is important to choose quality live crab – each has to be at around 350 gms to 400 gms. The crab should not have a fishy or ammonia-like odour, but rather smell fresh and similar to the ocean. Ammonia or fishy smell typically means the crab is not fresh or died before processing and may not be safe to eat. While purchasing live crabs, look for those that are active; when a crab dies, it immediately begins to decay. Purchase the crab the same day you plan to cook it. Talk to your seafood supplier when purchasing frozen crab to verify that the crab has remained frozen and not been thawed and refrozen.

Place the crab in a large bowl. Add enough milk to cover the meat and let it soak for 20 minutes. Live seafood contains the compound trimethylamine oxide or TMAO. When a crab dies, this compound becomes trimethylamine, or TMA, which is responsible for the fishy odour. The casein found in milk binds to the TMA, removing the odour.

Blue crab, being a crustacean, is a low calorie, low fat, white meat seafood. 100 gms of meat holds just 87 calories and 1.08g of fats. Their lean, white meat is an excellent source of protein; composes 18.06 g/100g that is complete in all essential amino acids in a healthy proportion. Blue crab meat is a good source of folate, niacin, vitamin B6, thiamine, and riboflavin. The blue crab is a rich source of minerals, including iron selenium, iodine, calcium, zinc, potassium, phosphorus and magnesium.

Blue crabs live in the sea, rivers, and brackish waters along the coastal shelf and estuaries. They are omnivores and feed on nearly anything they can find, plant and animal detritus and clams, oysters, mussels, smaller crustaceans and freshly dead fish.

Blue crabs exhibit unique reproductive behaviour. They mate from May through October in the brackish waters. Before mating, males cradle the soft-shelled female in their legs, carrying her for several days waiting for her to moult. After mating, the male continues to cradle the female until her shell hardens.

Females develop an external egg mass (bright-orange sponge) beneath their abdomen. In about two weeks, larvae are released into the waters. Larvae transported to sea waters but return back to estuaries and rivers to develop into full-size adult crab. Their lifespan is about 3 years.

Preparation – how to remove meat from crab

Lay the crab on its back on a large chopping board. Hold the crab firmly with one hand and break off the tail flap. Remove tail by unbending and twisting it, then discard. Twist claws and legs. Break the claws and legs with a nutcracker or chimta (tong), and then extract the meat.

Make the crab stand on its head and insert a heavy knife between the body and shell. Twist the knife firmly to separate them so that you can lift the honeycomb body out. Detach the spongy stomach sac, and cut it into quarters. Use a spoon to scoop out all the creamy brown meat from the back of shell. Crabmeat yield is about 3 per cent. Once cooked, its claws and shell turn maroon, irrespective of the original colour.

Here are some serving ideas other than biryani:

Recipes include devilled crab, where the meat is removed from the shell and cooked with mustard, radish and spices – an Anglo Indian style which you get in Goa and some parts of Kolkata. The meat also makes excellent soups. Soft-shell crabs may be lightly coated in flour and deep fried. It is a Goanese speciality in which crab is soaked in beaten eggs before being fried. In Singapore and China, soft-shelled crabs are served with a spicy garnish of extra bit of chopped garlic and fresh ginger.

Allergy to crustaceans may appear in 1 per cent of the population and is more common in teenagers and adults than in children. Many allergic reactions to seafood are mild and cause tingling of the throat and mouth, swelling and/or gut reactions with vomiting and diarrhoea.

Now the question is whether to call this dish Crab Biryani or Crab Pulao. As opined by foodies, biryani is richer in all about the juiciness, however, Pulao is not. Thus Crab biryani, not Pulao.

Fill a small saucepan with water and a few drops of vanilla extract. Place it on the stove and simmer the mixture while you cook your crab. The vanilla absorbs any fishy odour and your kitchen smells fresh. For another option, soak cotton balls in vanilla extract and place them in a small dish on your counter.

The Changing Learning Process With Teachers

Keep Boredom Away For Children With Online Hobby Classes