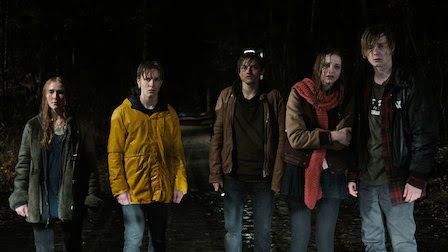 As I begin to collect the remaining bits of my brain to write about a show that has justifiably blown all our minds, I can only reflect on what has probably been the high watermark of modern television/web series. When the writing couple Baran bo Odar and Jantje Friese first sat down to work out this enormous maze of a storyline, one can only wonder how exhilarating and also frustrating that experience must have been; Frustrating because dealing with time-travel stories can lead to multiple loose ends and dead ends that must be tied and resolved and exhilarating because they did tie and resolve all the loose and dead ends with glorious results.

Dark is easily Netflix’s greatest export. There are a total of 26 episodes (Seasons 2 and 3 curtailed to 8 episodes each after Netflix’s changed format). Baran bo Odar also serves as the director of the show.

There is no danger in revealing the spoilers for a show as complex as this (except the one big spoiler at the end) since one would not understand it anyway. Infact a common complaint by some naysayers was the show was too complicated to enjoy. I look at it as a giant jig-saw puzzle which can be infuriating when you are stuck in the middle but brings total satisfaction once you complete it. To be fair to the writing duo, they assist the viewers with enough clues. The dialogues are very smartly written, revealing just enough but not too much. I think the first two seasons should now be watched again to understand parts that didn’t make sense before and get a grasp of why the characters did what they did. This is a show that gets better on repeat viewing and that is a rare feat. The casting team deserves special applause for choosing actors (for playing the same characters at different ages) who look so similar. This had to be done right and functions as another clue to make out who is actually who.

It is totally pointless to write about the plot but essentially there are multiple timelines and multiple versions of the same characters who repeatedly jump back and forth between these timelines, and in season 3, between different worlds. Bootstrap paradox is a recurring theme in time travel movies and is the central plot device of Dark. Again it is meaningless to explain the paradox with words since you can better comprehend it by watching the show. Shane Carruth’s Primer, Predestination, 12 Monkeys,Looper are some of the role model time travel movies that bend your mind as much as they bend time. But Dark stands out amongst them just because of the sheer volume of characters it has to accommodate and the motivations of the characters it has to account for.

Dark is also not just a nerdy time-travel adventure saga but has also a lot of heart. Parents resorting to extreme steps for their children is a major theme that runs through all the three seasons. The world-building of Winden, a small town with a nuclear power plant in interior Germany, with the forests, lakes and desolate roads sets up the horror-like feel of the show. Since the language is German it also adds to the other-worldliness of the show. The acting is superb and it helped that we do not recognize any of them from any previous work. Louis Hofmann and Lisa Vicari play Jonas and Martha respectively, the protagonists, and in a way the story revolves around the decisions their characters make.

Is Dark too intelligent for its own good? That doesn’t seem to be the case going by the adulation it has received. I am sure there is some redditor racking his brain to find some plot-hole in all the time loops. The only grouse could be if they could have stretched out for another season to explore more of the second world introduced in season 2. But I guess they had already set out the ending before they even started the first season and had a clear vision of where they were going. That is the hallmark of great writing.