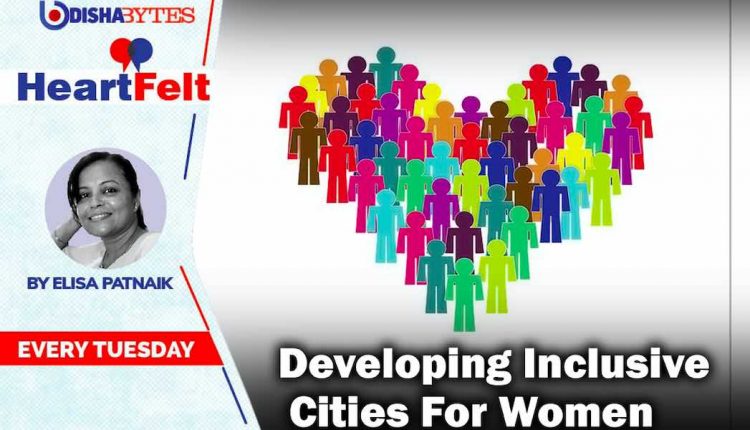 Relive an entire day in the life of a woman in a city or try to imagine one. Right from leaving the house, waiting for public transport in a bus or railway station and availing one. Or navigating the streets and other public spaces and accessing clean toilets while also dealing with unwanted attention and unsafe/challenging environments and situations.

The needs and experiences of women traversing the cityscape are completely different from that of men. This difference is rooted not just in the assigned gender roles both within and outside the house, but also in the apathy shown by urban planners in designing an inclusive city. On top, working women face additional challenges every day while commuting to work, and in their workplace, while also trying to cope with their domestic and nurturing responsibilities.

A working mother for example who has to drop her children at the bus stop, take public transport to reach her workplace on time, complete her office work, pick up daily groceries and reach home – is one of the commonest sights we have either experienced or observed. And yet, it’s not one of the easiest experiences for such women to undergo daily while battling discrimination, adhering to social roles and in the absence of adequate opportunities, facilities and safety mechanisms.

When it comes to women’s inclusivity, Indian cities scored just 37.75 out of 100 on an average, as per a recent study, ‘Top Cities for Women In India,’ released by Avtar, a diversity, equity and inclusion (DEI) consulting firm. The study ranked 111 big and small cities on their social and industrial inclusivity for women.

The United Nations (UN) defines women-friendly cities as those that provide the access to health, education, employment opportunities, comprehensive urban, social services, and a safe environment to the women population.

According to the study, Chennai is the most inclusive city for women in India, with a City Inclusion Score (CIS) of 78.41. Other cities that scored above 60 included Pune, Bengaluru, Hyderabad and Mumbai. Lucknow ranked the lowest at 25.36, with Ranchi, Guwahati, Patna and Dhanbad scoring poorly.

In the analysis, the CIS comprised the Social Inclusion Score (SIS) and Industrial Inclusion Score (IIS). While the SIS included social factors which help in making a city women-friendly, the IIS measured the extent to which organisations in the city across industries were inclusive of women.

The report decided on the CIS after analysing the current ease of living index, the national census, the Periodic Labour Force Survey, crime records, the National Family and Health Survey, the International Monetary Fund, Ministry of Women & Child Development’s annual report, along with Avtar’s primary research with employer organisations and women.

Out of the 111 cities in the study, only 47 were found to be above the national average of 37.75. However, smaller cities fared better than metros, with Tier 2 and Tier 3 cities (less than a million category cities) having comparatively higher scores for averages.

Interestingly, the toppers in both categories of big and small cities were from Tamil Nadu. Besides Chennai in the big city category, Tiruchirappalli topped with a score of 71.61, followed by Vellore, Erode, Salem and Tiruppur among small cities with a population of less than a million. Among small cities, Kavaratti, Muzaffarpur, Satna, Rampur and Bhagalpur scored the least.

According to Avtar, the rise of cities like Hubli, Nagpur, Ahmedabad, and Coimbatore as promising hubs of women’s employment, due to their high ‘industrial inclusion’ scores, metros like Delhi and Kolkata scored poorly in terms of ‘social inclusion’ due to lower standards of safety and poor enablers for women to pursue employment.

Women’s safety and perceived safety in a city is affected by a variety of interrelated factors. Besides levels of crime and violence, a complex intersection of social, cultural, economic, and familial issues mingle affecting women’s feelings and experiences of safety or unsafety. The socio-economic status of women, as well as city infrastructure including usages of spaces and familiarity and societal attitudes also involving the attitude of the police, are critical factors determining girls’ and women’s ease, comfort and safety.

Urban planners are either gender-blind or treat common space as gender-neutral and assume that women and men experience it in the same way. Recognition that gender and intersectionality affect one’s experience of the city is critical in designing a gender-sensitive and inclusive city. What we see in India at present is a lack of efforts in involving women, girls and other vulnerable groups in planning and creating inclusive and safer cities.

Importantly, social factors greatly influence women’s inclusivity in a city and that affects their safety and freedom in public spaces as well. It is crucial to consider social norms and expectations about women’s looks, presence, purpose in public spaces and notions about sexual harassment. For example, a woman sporting unconventional looks venturing at unprescribed hours is considered an aberration in our society

Unfortunately, despite several cities becoming ‘smart,’ the reality of inclusive cities is a far cry in India today. Not having access to employment opportunities, and losing access to public spaces, infrastructures and services is definitely a serious developmental challenge. And cities that do not address women’s needs end up being hostile and discriminatory to them.

Although re-imagining cities from the perspective of women, non-binary and vulnerable communities can lead to transformative change, what is also needed is greater participation and visibility of women in decision-making along with more women (architects, engineers, planners) designing the city as well. An inclusive city planned and designed to make women and other vulnerable sections can after all be a great city for all citizens and sections.