Govardhan Parikrama: For The Love Of Krishna

TravelNews You Can Use 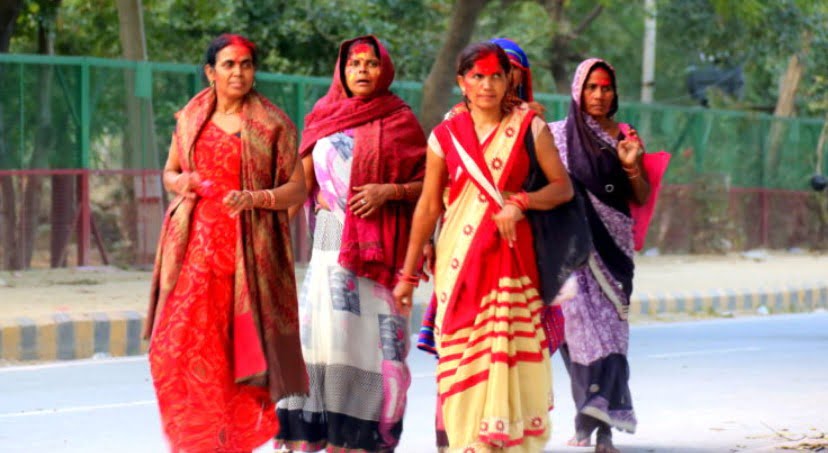 Braj Bhumi is the land of Krishna. Every physical feature of this land, be it the rocks, ponds, forests, dust and the villages, resonates with his touch, his fragrance, his presence and his leela. Krishna is omnipresent. That is the reason pilgrims throng to the region to feel this presence within themselves.

Govardhan Parvat is one of the key elements in the rich mythology surrounding Braj and Krishna. And the Parikrama of Govardhan, considered immensely auspicious by the Krishna Bhakts, is going to be our prime focus in this piece.

Mathura, the city of Krishna

Mathura which dominates the Braj Bhumi along with Vrindavan, Gokul and Govardhan, is one of the oldest continuously living city of India with a history that goes back 2,500 years. This history can be traced by a visit to the Mathura archaeological museum in the city. Mathura was ruled by multiple of dynasty including the Indo-Greek kings (Menander I, also known as Milinda in Pali text) in the 2nd century BC and Kushans (Kanishka the Great) in the 2nd century CE, who were both great patrons of Buddhism. Thus initially, the region was considered a great centre of Buddhism and Jainism. Hinduism also was prevalent with Shiva and Shakti as the main Hindu divinities. Later on, especially after 15 century CE, the region took to Krishna Bhakti and today it overflows with it.

Govardhan Parwat
Govardhan Parwat, also venerated as Giriraj, meaning king of mountains is in physical terms nothing more than a low ridge. But the intense religious fervour or devotion it raises among the thousands of Krishna Bakhts who throng to Mathura-Vrindavan on a daily basis is only seen to be believed. Govardhan features in many episodes related to Krishna or Krishna Bhakts. The most well-known or central one is where Krishna, as the Gopal (as protector of cows), lifted Govardhan Parvat with the little finger of his hand, to serve as a sort of an umbrella with which he protected the people and animals of Braj from the wrath of Indra (the king of Gods), who was bashing the whole place with his rain, thunder and lightning.

The Prikrama of Giriraj
One of the most exalted acts for the pilgrims while visiting Brij bhumi is to take on the circumambulation of Govardhan Parvat. The circumambulatory path that goes around this elongated shaped ridge is 21 kilometres long and is broken into two circuits, one bigger of 12 kilometres and the second a bit smaller at 9 kilometres.

The devotees take to different means when it comes to doing the parikrama of the Govardhan Parvat. Most choose to walk around the 21 kilometres long path in a barefoot fashion. Some take the easy option of going around in a rickshaw. But there are many who choose the most arduous means to show their devotion and surrender to their beloved God. These are the ones who cover every inch of the path by continues and an unbroken series of prostration on the ground. And these, who chose this extreme means of showing their dedication to God are in no way in a small number. There are many who could be seen going through this extremely demanding (in physical terms as well as emotional terms) process of parikrama. This is how they do it.
From kids to young adults to middle-aged people and even some senior citizens, they were all there. Males and females, both. They all carry a rectangular piece of thermocol or sponge sheet each, besides a piece of stone too. They spread the sheet on the ground, lie on top of it and extend their hand, which is holding the stone in front of themselves and place the stone as far as their extended hand would reach. From the tip of their toe as they lie prostrate on the ground to the point where they had placed the stone, is the total amount of distance they cover in one step. For the next step, they again get up, stand at the point where they have placed the stone in their last step and again spread the sheet and lie down on top of it, yet again extending their stone holding hand. This is a continuous unbroken exercise. On a single day, they progress on their path from a few hundred meters to a couple of kilometres, as per individual physical condition and capability. They mark the spot where till where they have progressed on a particular day and return to their place of night stay. The next day they resume their parikrama from the last day’s spot. It takes around a fortnight to a month’s time for people to finish the Parikrama in this manner.
Note: I intentionally did not make a video of the whole exercise as I thought it would be rude or disrespectful towards these devotees.
The 21 kilometres long path passes along a number of temples, water tanks and some residential pockets negotiated using narrow lanes and by lanes with stinking open drains running along. The path remains a busy one, thronged by the devotees doing the parikrama and also some locals going about their daily routine in rickshaws. Recently the National Green Tribunal has banned plying of motor vehicles and cars on their route. Which is a great relief. Still, the path is busy and congested in some stretches.

Sites along the Parikrama Route
Most people start the Parikrama from the point near the Daanghati Govardhan Temple. During this parikrama, they pass a number of temples and sacred water tanks.
One impressive looking temple is the Sarveshwar Giriraj Mandir, Nimbarki. The temple has an exterior of red sandstone and is built according to the old traditional architecture called the Nagara style, as seen in the temples of north India.

Many start their Praikrama from the much renowned Shri Giriraj ji Mukharwind Temple. The Temple is located at the end of a narrow-congested lane which branches off from the parikrama path. The temple is built on the edge of the Govardhan Parvat, so that the pilgrims can the rocks of the temple, offering milk, clothes, flowers and sweets.

Another very popular spot for the Krishna lovers along the path is the Radha kund, a water body where Krishna and Radha are considered to have spent time together. The spot is rich in mythology and imaginary centred around Krishna and Radha.
The most auspicious hour for the bath at this pond is the midnight hour. As a result, many reach it for the ardh–ratri–sanan or midnight bath. The nearby Shyam Kund is also an auspicious spot for a ritual bath.

Another popular spot is the Poonchheri Ka Lautha Baba temple. This is located at the tail end of the Govardhan hence the name Poonchheri which means tail. The temple is dedicated to Lautha baba, who as per the legend, was a childhood friend of Krishna.

The pilgrims stop at other venerated kunds (ponds or stepped water tanks) such as Udhav Kund, Mansi Ganga, Sankarshan Kund, Kusum sarovar, Gopal Kund and Hariji Kund among others. Each having its own story relating to Krishna or his consort Radha.

The sacred landscape of Braj
In the 16th century, Krishna bhakts Vallabhacharya, Chaitanya Mahaprabhu and Narayana Bhatt, through their individual journeys, sort of rediscovered the sacred landscape of Braj pointing out various lilasthalas. The spots where Krishna left the imprints of his divine presence in a variety of ways. In these, Govardhan finds repeated mention and a prominent place. It is said that Krishna spoke directly to Vallabhacharya, telling him about his svarupa image as Shri Govardhanadhara, the bearer of Mount Govardhan, to be found in the Mount Govardhan. As per the instructions of Krishna himself, Vallabhacharya found a self-manifested image of Krishna (swayambhu) in the mount Govardhan, which came to be known as Shrinathji.
Chaitanya, on the other hand, identified many such places where Krishna left his mark, including Radha Kund, where the lord and his divine consort Radha would meet. On coming to Govardhan hill it is said that Chaitanya Mahaprabhu fell to the ground, went into delirium and hugged the rocks. It is said that he carried a rock from the Giriraj with himself throughout the rest of his pilgrimage, to such an extent that the stone came to bear his own thumbprint.
Narayana Bhatt, who came to Braj from Tamil Nadu and settled next to Radha Kund, wrote his famous Vraja Bhakti Vilasa there. It is considered the most exhaustive detailing of the sacred landscape of Braj. He linked the entire landscape to the body of Krishna with different locations and geographical features making different parts of Krishna’s body, with Mathura as the heart, Vrindavan as the forehead among others.

Where to stay
The best and the most convenient option while visiting Govardhan is to stay at Shri Radha Brij Vasundhara Resort and spa. It is a beautiful, peaceful and painstakingly maintained property with a location right on the Govardhan Parikrama Marg.

The accommodation is available in nicely done and spacious cottages, which are located around a green lawn in a circle. The resort, that is spread over acres of land, has many facilities for the guest such as an indoor swimming pool, spa, gym, free cycles for riding and winding paths for a pleasant walk. The place also has a nice restaurant with a very elaborate menu. They seem to have a well- stocked kitchen as every dish on the elaborate menu was readily available. The room service was found quick and efficient.

On request, they will provide you with some authentic regional cuisine as well. We had a sumptuous breakfast here, which brimmed with traditional flavours and taste. Crisp Kachoris, puri with potato curry, a dish of traditional pumpkin stew, famous Jalebi and pedha for dessert and a thick traditional lassi in an earthen glass to wash all down with. It was a perfect breakfast.

The resort management is also quick to arrange for an E-Rickshaw with a very knowledgeable and friendly driver who would double as a guide for your Govardhan Parikrama. And if you want to do it on foot, then the resort’s spa offers a discounted foot massage which seems to be a great idea post a day long barefoot parikrama of Govardhan.

Why Do Odia Moms Hate Beard?

How To Order Coviself Online & Offline In Bhubaneswar

How To Reuse Wastewater From RO Purifer