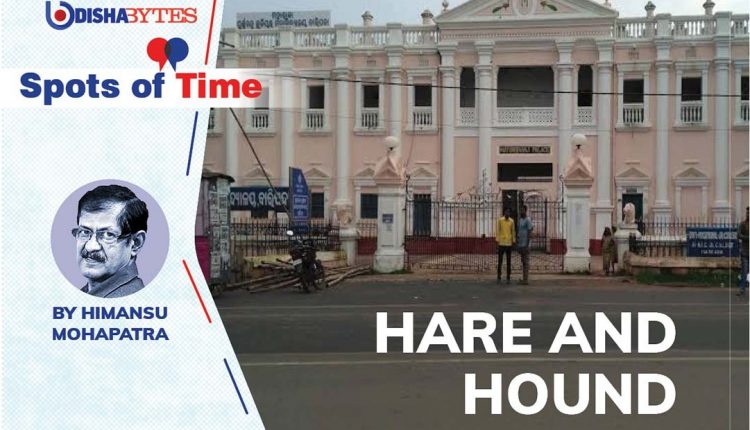 The commotion on the main arterial road that cuts the town of Baripada in two made us boys suspend our game in the empty patch of grassy field below. An extraordinary scene was unfolding before our eyes.

A young boy, healthy, robust and strong, came running from the direction where the Ambika Cinema Hall was. He stopped by the roadside, huffing and puffing, unable to flee farther from his pursuer. He was Jaga from our locality, known as a wastrel.

His pursuer soon appeared. He was a strong, young man of medium height and had a sharp and pointed nose with a prominent dark moustache. He was Srilal, the dada of Baripada.

Srilal, taking a little time to catch his breath and allowing Jaga to do the same, ordered him to hold his ears and do 50 sit ups by the roadside. Jaga obeyed. Srilal then left, but not before thundering out a dire warning.

“If I catch you loitering near a cinema hall again, you’ll know who I’m. Go home now.” Jaga slunk away without a demur.
We were left aghast and suitably chastened. What we took to be a reprehensible act of physical persecution of a young boy turned out to be an exercise in moral correction. Kabu, a boy from the same locality as Jaga, filled us in on the story. The elder brother of Jaga had asked Srilal, a friend of his, to help the family discipline the wayward Jaga. Srilal was apparently given a free hand with his method.

Jaga, of course, wouldn’t have cared for the sit ups. But he was mortally scared of the Baripada terror’s heavy hand descending on him. The result was that Jaga and Srilal were often found playing hare and hound in that small town in the 1960s.

Jaga couldn’t have known that there were definite limits to how Srilal might harm him despite the free hand given. He was still a boy and couldn’t have distinguished between real action and a stage-managed one. Illusion was still the reality. So he believed that Srilal had the power of life and death over him. He became a scarce sight around the three cinema halls of Baripada. That only meant he went underground. It was rumoured that Jaga at times sat in the hall right behind Srilal, wearing a disguise.
….
The elder brotherly measure was said to be necessary. Jaga had gone astray. Born to a family with some fading grandeur, and, being the youngest among four brothers and three sisters, he had been spared the rod. He had joined Siba in romancing all the forbidden pleasures such as smoking cigarettes, gambling, and petty thieving. Jaga and Siba were rivals too. A Jaga-Siba fight was said to be on the cards. The mere wind of a fisticuff about to happen would have all of us scurrying to the earmarked spot.

Jaga was a few years older than me, but would have been in class 7 had there not been another running incident. He had attended school only for a day in class 3 of the newly set up Golapbag Upper Primary School in their locality. In fact, it was the run that started it all.
….
That day is vivid in my mind. We were all seated on the school veranda of our class. Up to class 3 that was the practice. Rooms were allocated for classes 4 and 5.
A new student had come to class. He was fair and strong. He seemed a bit of a loner. The class teacher had not yet arrived. All the boys and girls were looking at him quizzically, trying to size him up. And then Dhisboy made the first move and challenged the new boy to a panjha ladhei. It was a custom to put a new boy through his paces by having him prove his mettle in panjha ladhei (arm wrestling), literally a grip strength contest. It is a contest in which two boys, sitting opposite each other, would lock their right palms, with each one trying to force the arm of the opponent down until the elbow of one of them hit the ground with a thud.
The newcomer instantly accepted the challenge. Panjha ladhei between the two began in right earnest, with everyone’s attention riveted on them. Dhisboy and he gripped each other’s palm tightly. At Sunit’s whistle the contest began. But Dhisboy, the champion, the expert panjha ladhua, found his elbow flattened in a minute. He wanted a rerun on the ground that he was not ready. The result was no different. Dhisboy lost. Before our very eyes a new hero had been born. But who knew that it would be such a short-lived glory?

The teacher came. Everyone was quiet so as not to betray any sign of the just-concluded contest. The new boy began to fidget. The searching, blood-shot eyes of Sir soon sought out the stranger.
“What’s your name?”
“Swarup Kumar Bose. Nickname Jaga.”
“I didn’t ask your nickname, boy. So where do you live?”
“Near the mess below the jackfruit tree.”
“Where are your books and notebooks?”
At this Jaga suddenly got up, leapt from the veranda to the ground and bolted at lightning speed without once looking back. And that was the end of Jaga’s schooling. Four years had passed since that day.
…..
I wonder today whether Srilal’s disciplining, of which we had had ample glimpse that day, was moral correction at all. For it countered boyish waywardness with fear, force and violence, that too by someone from outside the family. It was only delaying the inevitable: the downward spiral of Jaga whose hormones raged with ever greater ferocity with the onset of youth. Roles were soon to be switched, with Jaga becoming the hound and Srilal, the hare. Meanwhile, of course, Srilal was adding feathers to his cap for having taken zealously to the rod that Jaga’s family had sadly abandoned.