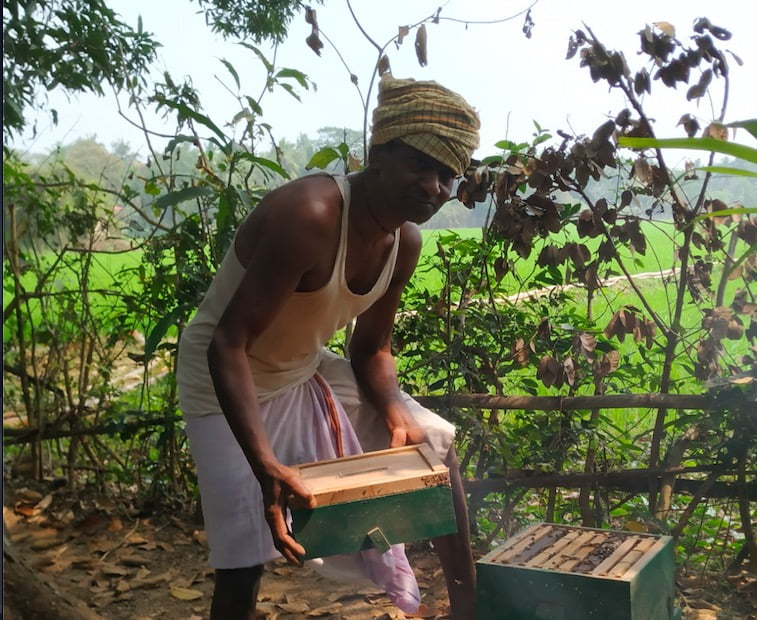 Honey bee farming has become a great financial equaliser for farmers in the country of late. The government’s focus on this age-old practice as an allied activity for famers has given it a further boost.

Its popular demand in the national and international market is another reason for reviving this ancient practice. Bee keeping is  one of the oldest traditions in India for collecting honey. It not only makes a sweet dividend for farmers but also helps  in increasing agricultural productivity through pollination.

Take the case of Amulya Kumar Nandi, a 56-year old farmer of   Parulia village of Baliapal block of Baleswar district. He was among the first in his village to reap the harvest of honey bee farming. His  annual income from bee cultivation alone is Rs 70,000. He is also doing paddy cultivation on two acres of land and groundnut in rabi season. Many farmers in his village are now following his example.

However, the road to success was not easy. When he started bee  farming, he attended a training programme of the Odisha Govt on bee cultivation practices. Even then, the going was not easy. He couldn’t get good quality boxes for thriving  bees. This is when he got to know about the Reliance Foundation Information Services (RFIS) toll free no (18004198800) and contacted to solve his problem. It helped him by showing him the best way with less investment. “RFIS shows the  best way to maintain the economic sufficiency of a farmer,” he said.

Teleconferencing  by RFIS is the best way of interchanging knowledge among farmers and agri-experts. Farmers can rectify their method and can also make best use of technology-based farming. For example, there are times during bee cultivation when beehives get paralysed leading to loss in honey production.

Amulya was also facing this situation. Just as he was despairing, he got to know about RFIS, which was just a call away. An agri-expert from RFIS told him about the bee farming practices and also helped him in solving his problem.

Sure enough, his last annual income from honey bee production was  approximately Rs one lakh. It was a good indicator of economic  upliftment for him.

“RFIS is playing a pivotal role in agricultural  improvement,” said an elated Amulya. RFIS message services and  audio call hints about various hazardous climatic problems and helps the farmers to protect their crop.

Amulya has been farming since 1982. Today, he has 12 bee-thriving boxes for beekeeping in his farm. Farmers throughout the country can benefit from RFIS services just like Amulya did and enhance their economic condition. In the long run, this can improvise and improve rural agricultural economy.

Odisha On COVID-19 Alert: No Advance/Fresh Booking For Kalyan Mandaps In Bhubaneswar Till March 31

Commuted Leave For Odisha Govt. Employees Above 50 For Certain Ailments