I Was A Hyper Anxious Parent. And You? 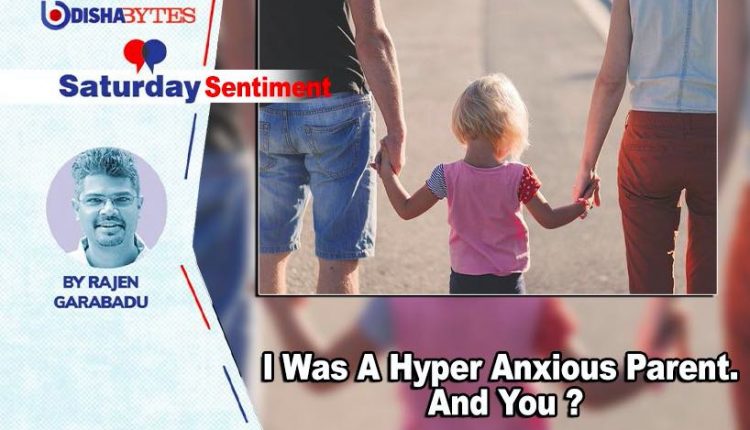 You are a hyper-anxious parent. You get excessively worried about your child’s growth, health, and safety. And you are over-protective towards your children.

Maybe you are not.

But I was. Not so long ago. It took me a few years to tone down. I have much improved since then. But I am still anxious.

I became a dad when I was 38 and a half. My wife Gargi and I have a single child. It began during my wife’s pregnancy. I worried excessively about my child while she was in my wife’s womb.

Sara, our daughter, arrived a fortnight before she was expected. At merely 1.88 Kg (just over 4 pounds), she was much too frail. I was overcome with concern and fear. I would fret over her diet and measure her body weight twice a week to check how much she had grown.

As an infant lying on her bed, Sara would be surrounded by cushions all around lest she rolls over and falls. Even if there were 3-4 cushions, I would always add a few more.

When Sara was a toddler learning to walk, I was always anxious she might fall and hurt herself. Parents do worry about their children to some extent. I took it to an extreme.

Before Sara enrolled in school, I would imagine waiting in the car for the full duration while she attended school. Just in case she hurt herself or someone pushed her. I needed to be near to act swiftly. That’s how I felt as a parent.

Gargi asked me how I planned to work if I would be stationed outside our daughter’s school for 4-6 hours. “I will work from my car,” I muttered under my breath. It was much before COVID-19 changed the way the world worked, when working from home (WFH) or remotely was an exception.

Gargi worried about me. At first, she counselled me to overcome my fears. When things didn’t improve much, she decided to take the bull by its horns. She suggested Sara commute by school bus right from the first day she enrolled in school. For a hyper-anxious father, it was unthinkable. Gargi prepared me for it.

She spoke about the need for our child to be independent. She impressed upon me that it would not be possible for us to always be around Sara. It was pointless to cushion her to the extent she depends on us or others for everything.

Gargi’s argument was cogent. Sara began using her school bus from day one of kindergarten. She handled it well. I struggled.

It took me a while to adjust to Sara’s bus travel. She was yet to turn four. For a dad who planned to park himself outside the school for the full duration of school hours, coming to terms with this was HUGE. It required intense mental conditioning.

Raising Children When Everyone Has a Say

In India, there are other factors that influence how children are brought up, and how independent they are allowed to be.

Grandparents do tend to prevail on safety and precautionary measures they feel must be taken for the child. The extent of these measures differs from family to family. They may not get a completely free hand in how they would like their grandchildren to be brought up if the parents feel their suggestions are inhibiting the child’s ability to be independent.

In most families, it’s always a balance. Between what the grandparents want and what the parents feel should be done. And there’s the child’s view too. What’s followed is somewhere in between.

Gargi and I have agreed on our safety measures. One of us or Sara’s nanny still accompanies her when she’s out of home and not in school. As a girl child, her safety and security are always a concern for us. However independent we may want our child to be, the ground realities cannot be ignored. We have to be conscious of the environment we live in.

In that sense, Sara is not fully independent. But both she and us have come a long way from where we started.

If you, my dear reader, are like how I used to be, this may be useful. If I can change, you can too.

I am still a work in progress. But I am happy to share that I am getting there, inch by inch.