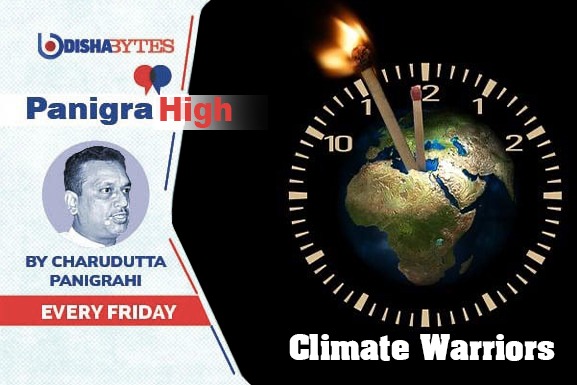 Bhubaneswar: Despite the death knell being sounded, we are still caught up in our pettiness, callousness and foolish avarice. Even as I write this column, the much-hyped COP 27 has been extended by a day because there was no clear agreement on key issues including funding for loss and damage.

There has been a shameful and frivolous breakdown in trust between rich and poor governments that could botch hopes of a deal. Disaster or no disaster, we won’t change. The globe is destroying fast, and we are skirmishing furious. There are four contentious issues: a) countries’ plans to reduce greenhouse gas emissions in line with limiting global heating to 1.5C above pre-industrial levels, b) how to help poor countries adapt to the effects of the climate crisis c) finance for poor countries to cut emissions and adapt to extreme weather d) and loss and damage, which covers ways of helping countries afflicted by the worst ravages of climate disaster.

A pleading and desperate UN Secretary-General, António Guterres says “there has been clearly, as in past times, a breakdown in trust between north and south, and between developed and emerging economies. This is no time for finger-pointing. The blame game is a recipe for mutually assured destruction.”

This churlish & supine global inaction will have dangerous implications for Odisha and India. Odisha and many other parts of India, both the coastal and the inland, are living on the frontlines of the crisis. Not many provinces in South Asia will reflect the urgency, scale and enormity of the challenge more than Odisha. Failed and divisive COP27 would institutionalise the denial of climate justice to those who have contributed least to the climate crisis and are getting hurt the most.

We have to fend for ourselves. The EU has at the last moment agreed to fund the losses and damages of the developing countries. In a mid-night spree of discussions, the rich countries have agreed ‘in principle’ to fund the poor. Nothing has changed since centuries. But this relenting to pay ‘loss and damage’ expenses seems more like a last-minute compromise and a face-saving PR stunt. In effect, resource support from developed countries will peter out and government and the civil society in Odisha should not expect sustained and robust funding to work in the climate resilience of the communities.

India has just released its long-term strategy of achieving net-zero emissions by 2070 at the ongoing COP27. This ‘Long Term Low Emission Development Strategy (LT-LEDS), focuses on the ‘strategic transition’ of several high-emission sectors, such as electricity and transport, urbanisation; carbon dioxide removal for industry; forests; finance and investments. The plan is aimed at improving research, innovation, climate adaptation and resilience. Our electricity generation is coal-dependent, with about 20 per cent supported from renewable sources. India has pledged to increase its installed renewable generation capacity to 50 per cent, as part of its Nationally Determined Contributions (NDCs), or long-term climate goals. The EU supports our call to phase down its use of fossil fuels as part of a COP27 agreement, so long as it does not weaken earlier coal use reduction agreements. We as a country are the second-largest coal consumer in the world, and coal is essential for us: it accounts for nearly 70% of the country’s electricity generation, and fossil fuel is needed to lift millions out of poverty.

The larger point is to not phase down/out coal so much as to make this transition in a way that is ‘just’, and not simply climate oriented. By an estimate, India will need about $1-3 trillion in the next decade to ramp up efforts to reduce our dependency on coal (energy transition) and at the same time to provide alternative livelihoods to workers long associated with the coal industry. Post closure of coal mining, what will they do? We need to devise mechanisms like direct transfer of money or UBI-like support. The draft decision text of COP 27 finally carries two key points advocated for by India in the mitigation clause. One, the “phase down” of unabated coal power while the second one is about the conditionality of the fossil fuel subsidies which relates to “providing targeted support to the poorest and most vulnerable”. The initial draft used “phase out” (instead of phase down) for coal and missed the targeted support point. India raised objections to this.

As India will strive towards achieving the 2070 target, Odisha’s contribution to the nation’s energy transition would be more important than perhaps what we assume now. In 2020-21, Odisha produced the second-highest coal of over 154 million tonnes in the country. Coal India Ltd (CIL) expects a coal production programme of one billion ton from CIL mines by the year 2023-24. It is believed that this will help in reducing imports and hence will protect the capital of the country. An Inter-Ministerial Committee (IMC) has been constituted in the Ministry of Coal to help reduce the import of coal. Odisha will be the first state to have climate financing. In the current budget, about Rs 228.52 crore should be available for groundwater recharge and solar micro-irrigation with a focus on tribal areas of Odisha. There is something like a Green Climate Fund in Odisha (about $34 million). It needs to have a larger pool for ‘Just Transition’. In each coal block in Odisha (and there are more than 31 blocks operational) there are more than 2,000 PAFs (Project Affected Families), who are the primary stakeholders. And there would be more than 10,000 secondary stakeholders. At least half-a-million lives are associated with coal mining in Odisha. (Source: FIDR study).

Odisha has outlined an investment of Rs 2.45 lakh crore in its State Action Plan for Climate Change (SAPCC)-II, in 10 years (2021-2030), for climate adaptation and mitigation activities in key sectors. On an average, it is about 20-24K Crore annually. Odisha is the first state in India to get its second phase climate action plan approved by the Government of India. This includes both adaptation and mitigation activities to tackle climate change across sectors. 73 per cent of the funds are allocated for adaptation, 11 per cent for mitigation and 16 per cent for both. Water resources have been given prime focus in the plan – for flood management and drainage system, conservation of water resources and increase in water use efficiency in the irrigation sector. Conservation of water resources aims at ideally including completion of major and medium reservoir projects, construction of check dams, de-silting of minor irrigation tanks, rainwater harvesting and groundwater recharge. But what about the urban development sector where the action plan should include working on building bylaws, and risk-sensitive land use planning in the master plan of the cities?

Bhubaneswar is already bursting at its seams now. The state population is 4.37 crore. In the next 15 years, it is expected that over 17 per cent of the population would be in cities (or city bound), out of which Bhubaneswar is estimated to attract over 80 per cent of this migration. By 2030, Bhubaneswar would house the stakeholders of the great India growth story because it will be the capital of the capital. Odisha, the projected steel & metals capital of India would be the principal provider of India’s targeted 300mt steel capacity by 2030.

Climate change is not only about fossil fuels or green energy. Climate investments in urban development, water and forestry sector in the next 10 years is imminent. Restoration of urban water bodies, integrated sewerage projects and green space creation as part of climate change mitigation strategy will require an investment of over Rs 1 lakh crore in a decade (by 2030). But can we stop rampant, unplanned housing/commercial real estate projects? Do we have the collective commitment and resolve to make our own lives better?

Odisha, being one of the most vulnerable spots in the world, needs to prepare and stand strong. Our political will and administrative capacities will be ‘climate oriented’ if we start galvanizing Climate Voters. In the next elections, Climate voters are required to demand, mobilise and hold stakes in investments in climate resiliency at the NAC/municipal/PRI levels. Local recreation, open space protection, brownfield remediation, and forest and habitat restoration should be the priority of the local communities and they along with the politicians and the administrators ensure climate justice. Odisha amended the Odisha Grama Panchayat Act (OGPA), 1964, and Odisha Panchayat Samiti Act (OPSA), 1959. With the amendments, the panchayats need to introduce measures to control the spread of epidemics and other infectious diseases. The amendment also empowered the panchayats to prepare disaster management plans at the village level. Localisation through local governance has the advantage of being close to the communities and that can help assess the vulnerabilities of the people.

Finally, the inclusion of transition to sustainable lifestyles and sustainable patterns of consumption and production have been included, in COP27, as integral to our efforts to address climate change. India has pioneered the launch of the “In Our LiFEtime” campaign. This campaign envisions youth between the ages of 18 to 23 years to become champions of sustainable lifestyles. This campaign takes our age-old belief and practice of respecting mother earth and differentiating between need and greed. The campaign gives a global call for ideas from youth across the world about living environmentally conscious lives. This should translate to a global youth movement influencing lifestyles for the environment which are sustainable and scalable and can be disseminated as good practices that can be shielded against the earth’s destruction.

Developing pro-planet generations is the best ammunition against climate apartheid.

44th ICOLSI Kicks Off At Centurion University In Odisha Capital

Why Did Mr ‘Kutta’ Sorry, ‘Dutta’ Bark To Get His Name…