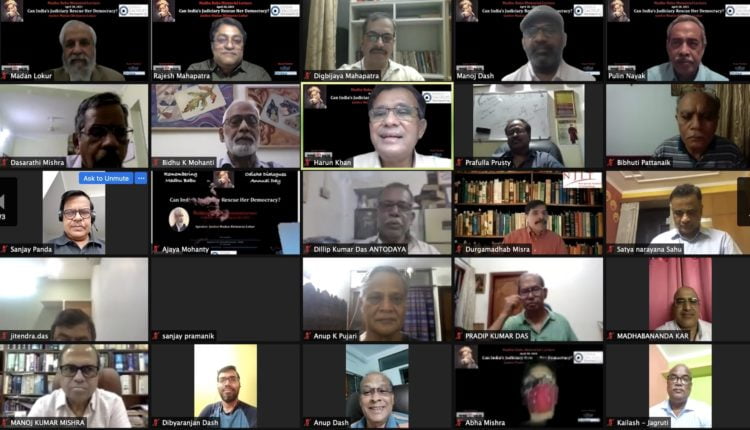 Bhubaneswar: Free and fair elections, fundamental freedom and an independent judiciary, which form the “basic structure” of India’s Constitution, are being attacked in an unprecedented and alarming rate, said former Supreme Court judge Justice Madan Lokur.

Speaking at the inaugural Madhu Babu Memorial Lecture, organised by Odisha Dialogues, a thought leadership forum that seeks a meaningful dialogue on Odisha’s future, Justice Lokur said people seeking help during the pandemic are being charged with sedition cases while news and social media channels reporting failure of authorities in managing the pandemic are being blocked.

To make it worse, hundreds of crores are being collected through non-transparent electoral bonds and spent on state elections at a time when the country is short on resources to fight the pandemic, he added.

During the talk, titled “Can India’s Judiciary Rescue Her Democracy?”, Justice Lokur pointed out how India has steadily been slipping in the eyes of the outside world. In the Rule of Law Index, India is 69 out of 128 in 2020 and in the Doctrine of Liberal Democracies Index brought out by VDem Institute, India has fallen from 0.57 in 2010 to 0.34 in 2020 (1 being the highest).

What can the judiciary do? To start with, Justice Lokur said the judiciary has to first put its own house in order. Appointment of Judges has been stalled for months and for few years in some cases. There is lack of transparency in the functioning of the judiciary. More importantly, the independence of the judiciary is being increasingly viewed with suspicion. “We need to seriously introspect. Are we doing the right thing?” he asked.

In Pictures: In A First, BSF Contingent At State-Level Republic Day Parade In…