Kadua Ashram: Govt Must Act To Revive This Link To Gandhiji, Freedom Struggle 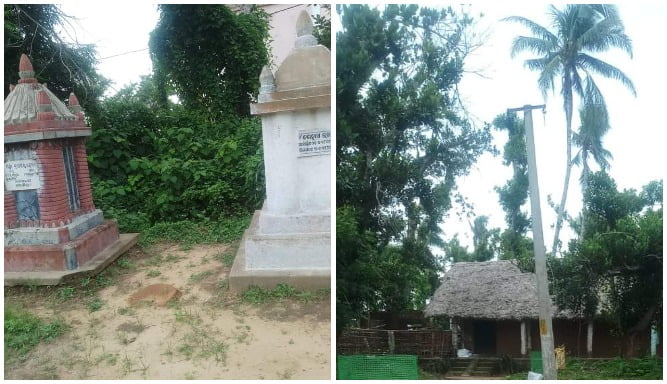 In its heyday, Kadua Ashram at Sakhigopal pulsated with patriotism and idealism. Those were the days of freedom struggle and the leafy surrounds of the ashram reverbrated with the energy and excitement of freedom fighters of Odisha. As they met – sometimes in secret to escape the angry gaze of the authorities – and charted out the course of action for their struggle besides putting in motion Gandhian programmes, the place became an inspirational presence in the minds of the people of Odisha.

During his visit to Puri in 1934, the fifth of his eight visits to the state, in the course of his padayatra for the emancipation of Harijans Mahatma Gandhi had rested at a small thatched cottage in the ashram besides addressing a gathering of freedom fighters. Jawaharlal Nehru, too, had visited the place to interact with the latter. This meeting was presided by Jagannath Rath, one of the illustrious sons of the soil, whose role in the freedom struggle and the khadi movement is all but forgotten now. Member of the Loksevak Mandal, Lala Mohan Lal, overseeing famine relief operations in Odisha, stayed here often. The visits of these pan-Indian figures is proof enough of the immense significance of the place in the days before Independence.

Lest we forget the great souls from the state who provided the freedom struggle leadership, direction and its popular appeal, Kadua Ashram was among the places where the likes of Pandit Nilkantha Das, Acharya Harihara, Pandit Godabarisha Mishra, Lingaraj Mishra, Biswanath Das, Gopabandhu Chaudhury, Jagannath Rath, Rama Devi and Malati Chaudhury met to discuss national trends in the freedom movement and the course of action to be followed in the state. The blueprint for the Salt Satyagraha at Kuhudi in the early 1930s was prepared at one such meeting. Many padayatras meant to spread social awareness among people in rural areas began at the ashram.

The Kadua Ashram was one of the important centres of the khadi movement and its links go back to Utkalamani Gopabandhu Das. In 1925, he founded Charkha Relief Society at Sakhigopal with the aim to propagate khadi and conduct flood relief work, and left it in the charge of his student and close associate Jagannath Rath. After his death, Rath, in association with Krupasindhu Hota, decided to continue the work of the society and shifted its operations to Kadua in 1929. In the same year, under the instructions of Mahatma Gandhi, Charkha Relief Society was renamed as Gopabandhu Daridra Narayana Seva Sangha and its management left in the hands of a five-member committee, with Jagannath as its secretary. The Sangh intensified Gopabandhu’s relief work and vigorously pursued his mission to promote khadi.

The ashram, alive to the cause of the nation and dedicated to the uplift of the downtrodden, buzzed with activity then. It was in many ashrams like this that Odisha of today took shape and deepened its link with the national mainstream. Close to a century later, this witness to history, lies in a state of neglect. The tombstones of Jagannath Rath and Krupasindhu Hota stand forlorn in close proximity overlooking an unwieldy growth of vegetation. The thatched house where Gandhiji rested has all but collapsed. A visit here no more evokes a sense of history. It may not take long for all this to disappear, from public memory and in physical presence.

The locals have been demanding revival of the ashram as a heritage site. “Unfortunately, it has not led to any serious action from the government. It must act before this precious piece of the past is lost to us entirely,” noted Durga Mohapatra, a local resident.

Mercury Rising: Did You Know Bhubaneswar’s Brush With 40°C Plus February In…

Mahatma Gandhi, The First Celebrated Indian To Declare His…