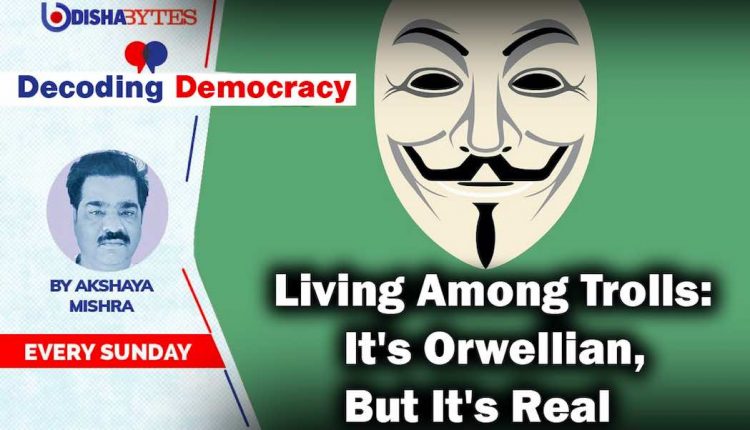 Hate them as much as you like. Summon the choicest words to describe them – unintelligent, ill-informed, mean, malicious, bhakt, chamcha whatever – but there is no way escaping them. In the age of social media, they wield extraordinary power as influencers. Without a mention to trolls, no observation of present-day democracy would be complete.

They are important drivers of news and opinion — notice how social media reaction has become a must-have in news content and how they lead primetime conversation. They can alter perceptions, and destroy political players and private individuals in a jiffy. While social media are their stomping ground, their influence transcends from the virtual to the real world with certain seamlessness.

Social media posts, as we notice, can trigger violence, prompt police action and mobilise masses. The biggest tribute to their mighty presence is perhaps television anchors, other journalists and politicians imitating trolls. The language is similar, and so are the attitude and the craving to draw attention. One can add disdain for logical thinking and reasoned viewpoints.

Their most important self-assumed role however is that of enforcers of an arbitrary code of conduct. People can be trolled for dressing inappropriately, for words they utter, for the way they look, for what they think on issues, for politically incorrect positions they take, for the way they bring up kids and so on. We can have a legend like Sunil Gavaskar being trolled viciously for making an innocuous statement on Virat Kohli and Anushka Sharma, Shah Rukh Khan promoting a fairness cream while his daughter does not have a fair complexion, actors repeating a dress at a function, an IPL team captain losing a match and for just about everything. The usual targets are celebrities but that is not necessarily the rule. It can be anybody.

All this could be dismissed as indulgences of frivolous people with nothing meaningful to do in life, but at a deeper level it is far more serious — it’s like being in a surveillance society where all your moves are watched and recorded. Trolls set invisible boundaries for social and moral behaviour that must not be crossed. Individuals must conform to standards set, and acts of defiance and deviance invite severe reprimand. In his iconic novel ‘1984’ George Orwell depicts the extremes to which it can go.

‘ThinkPol’ monitored ‘thought crime’ in Orwell’s dystopia Ocenea. The job of this secret police force involved keeping a hawk eye on proles, the vast ruled class, and reporting any action or word not in sync with the thoughts of the state. It operated through a vast army of informers, which included children who were encouraged to spy on their parents, and gadgets such as the telescreen and microphone placed everywhere. The elaborate surveillance mechanism ensured that no action of citizens went undetected. Those suspected to have committed thought crimes were dispatched to centres for reprogramming via brainwashing.

Trolls could well be the ThinkPol of our times. Orwell’s work carried a deep political connotation derived as it was from his experience with communists, but even without politics involved an army of invisible watchers carries eerie possibilities. Particularly in the areas of the right to privacy and freedom of expression.

In Orwell’s novel, however, ThinkPol or thought police was not the only way to force people to conform. The government had instruments for thought control such as ‘Newspeak’. It curtailed the English vocabulary to a bare minimum. Fewer words meant control over expression and imagination, and in general, the ability to think. The less creative with words and ideas the citizens are, the better it is for an oligarchic state. On social media platforms such as Twitter the limit on words ensures that communication has to be sharp and to the point. For maximum impact, the content has to be curt, direct and even offensive. In social media ‘Newspeak’ nuances and subtilities of thought have little place to breathe. Imagine language without adjectives, you get the picture.

Trolls, of course, are not a unique product of the 21st century or advanced communication technology. Existing in the form of dissenters, closet rebels, grudge-holders and gossip-mongers, they go back as long as human civilisation. They represent negative sentiments born out of sense of deprivation, disprivilege, powerlessness, jealousy, inferiority complex and feeling of inadequacy. In fact, there’s a troll in all humans, awaiting its opportunity to singe and sear real imagined enemies. Letting it out at times could even be healthy for the soul.

In fact, all societies allow it to some degree through popular culture. Yet there are controls and brakes to ensure that trolling does not become a disruptive force and threat to order and harmony at a wider level. Education and socialisation serve the purpose at the level of the individual and various norms of decorum in public behaviour at the level of collectivity.

The big difference between the present and the past is the mechanism of control appears to have collapsed. The aggrieved, much better networked and organised, much assured in numbers now, is out in full force to exact revenge. Any isolated, localised feeling of frustration, which would burn off in a few days and amid a burst of angry words earlier, could assume the national scale riding on the reach of social media. The fringe can be mainstream and revolting ideas can find validation through the sheer force of numbers.

Since there’s no immediate remedy, technological or otherwise, to curb mob mentality born out of the urge to settle scores, we might soon find legitimisation of misogyny, racism, casteism, chauvinism, superstitious beliefs and all such beliefs held unacceptable to a civilised society so far. In short, the trend of trolling can undo what decades of democracy and have achieved so far.

Should we be worried? The answer is both yes and no. Yes because the presence of thought police and an unofficial surveillance system is a serious threat to the ideas of freedom and privacy. Trolls might turn our society into an Orwellian one. Also because the mob on social media is manipulable. They can be used by smart people to further agendas. No, because the excess on social media would at some point necessitate measures to rein in trolls – there is a point up to which societies can take unruliness. Also because it puts sharp questions to old, ossified beliefs. Beyond the current chaos, there could be a more balanced world.

Hate them or love them, trolls are here to stay. Democracies, whatever shape they take, have to reckon with them as a force.

Naveen Turns 76, But Urges Well-Wishers Not To Visit Him