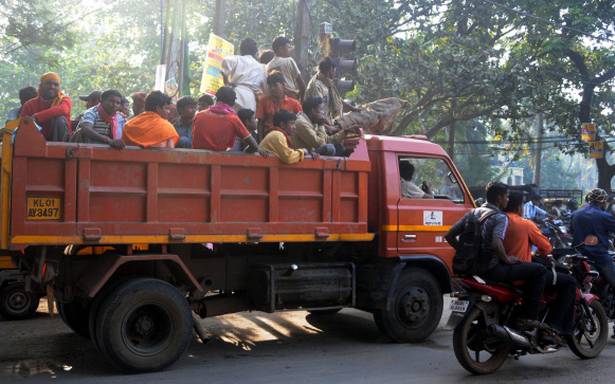 Share
One in every few bricks that go into erecting the refined, status-signalling dwelling units of urban India is the product of a deft Odia hand. The ornaments of extravagant stones that embellish the well-maintained necks and immaculate fingers of the well-heeled in the high-flying society in the Middle-East and elsewhere in the world have an Odia touch. The same goes for carpets that adorn the floors of fancy houses and attires that cover the uber-rich and the hoi poloi alike across the country and beyond it; and also for the highways, flyovers,  manicured parks that describe urban infrastructure.
As a community, we should feel extremely proud, shouldn’t we? Not really. It is an achievement that should leave us embarrassed. The Odia workers in question are migrants from the state, out in search of a life more bearable than back home. They are everywhere, from the brick kilns, stone quarries, construction sites, of Andhra Pradesh, Karnataka, Tamil Nadu and Kerala to cotton mills, diamond polishing units and ship-breaking units in Gujarat to homes and hotels in metros and big cities as house helps and cleaning boys. In the host states they form the bottom of the economic ladder, into jobs locals find too lowbrow or too unremunerative.
The facts on the ground are grim indeed. According to unofficial estimates, over two million people from Odisha migrate to other states in the agricultural lean season. The government’s own estimate last year put it at 1.3 lakh. But it could have missed the real number by miles given the slimy ways the network of seths and sardars and brokers operate. But there is no point quibbling over numbers. It is well-known that the poor from villages in districts such as Balangir, Nuapada, Kalahandi and Bargarh receive wage advances from their recruiters by September every year before they get outbound in November. Villages empty out, with only old and the infirm left behind. However, it is not western Odisha that witnesses seasonal distress migration only. The northern, western and coastal regions account for a good chunk of the migrant traffic.
In an ideal world, people moving out to earn good money during the unproductive agricultural season in the absence of other options would be a pragmatic proposition. However, it is not usually the case. What we have been witnessing in most cases is bonded labour of the worst form with all attendant evil. News of torture, harassment and exploitation of labourers and the inhospitable, often hazardous, condition they operate in keep trickling in. The unskilled lot suffers the worst. Trapped between the unforgiving seasons and rapacious employers, poverty back home and a glimmer of survival hope away, they have little scope to break out of the cycle.
All this, of course, is not news in the state. Distress migration of people has been public knowledge for decades. The government’s intervention has obviously not delivered the desired results. In the latest move, it has decided to provide 200 days of work under MNREGA in migration-prone districts among other measures. Earlier, it started migration support centres in key destination states to ensure the well-being of migrants. It has an action plan involving several departments in place. The sincerity of the government may not be in doubt yet the apprehension that its measures would fall short cannot be wished away. The ground reality, after all, has not shifted much in the past several decades despite such efforts.
But that is only one form of migration. We have not started on the migration skill and talent from the state. The beneficiaries are the developed states. More on this at some other time.
Are we treating the symptom instead of the disease? Do we have only placebos in place of real medicine? Is our diagnosis of the problem of migration on the ball? Or is the disease so untreatable that we can only pretend to treat it? It is a riddle wrapped in a mystery. Till we resolve it we will continue to be suppliers of cheap labour to the country and wear the dubious tag of being the makers of modern India.
migrationOdia prideodisha
Share FacebookTwitterGoogle+ReddItWhatsAppPinterestEmail