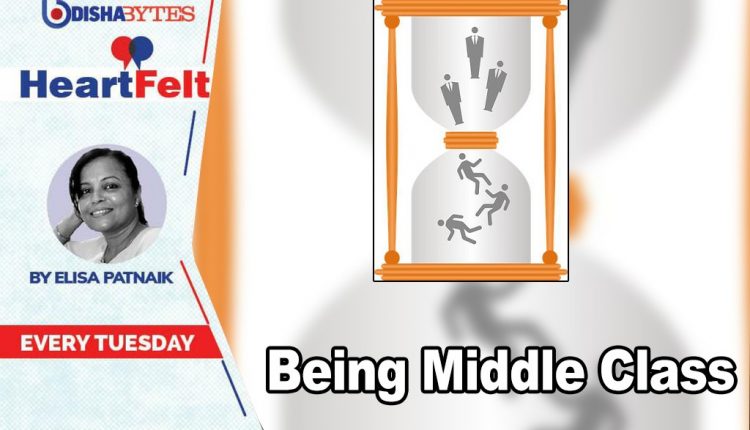 Despite multiple and promising investment options, I still think the good ol’ fixed deposit scheme is good enough for me. I thank my stars that so far, I have not taken a financial loan or borrowed money as yet. I am filled with remorse if I’ve been unduly rude to someone. I get pangs of guilt having to waste food and prefer consuming it to discarding it.

Although I may not concur with some of the middle-class norms in certain things, I am quite happy and contented with being middle-class at this stage of my life. It keeps me grounded, steady and to some extent moderated which has augured well with me. I agree, I am neither a risk taker nor too ambitious and like my parents, I too believe that a good education will go a long way in building a solid, fulfilling and balanced life.

Of course, I am not strictly defining the middle class as per the typical socio-economic stratification or as a social formation but more as a way of life that shapes your thinking, values and attitude towards life. But I am glad I grew up in a middle-class family where hard work, discipline, thrift, honesty and a sustainable lifestyle were valued. Where reusing and repairing stuff was a common practice and hand-me-downs from elder siblings and cousins were accepted with gratitude and love.  Things which were broken were repaired, and clothes with small rips were mended. Wasting food was a strict no-no and leftovers were always consumed.

I remember during our school days; our uniforms were stitched and school shoes were purchased by turn as it was not possible for my parents to spend for three school-going children at a time. We grew up studying the school books of either our elder siblings or our seniors. Even pencil and geometry boxes were reused. School tiffin was homemade, predictable and the boxes always came back empty. Good food was never taken for granted and we savoured every bit of it. Of course, soft drinks, juices and pastries were luxuries and we really relished them whenever we had them occasionally.

Educating three children in one of the best schools would not have been easy for my parents but they gave us the best education they could which set a solid foundation for us. We were taught to be hands-on too. Repairing things, doing various household chores and being independent. From helping in getting grocery, ration and vegetables and watering plants in the garden to repairing gadgets and fetching guests from the railway stations, we did all these willingly. We did not have house help except for the part-time domestic help for my mother. The middle-class habit of washing our own clothes and ironing stayed on for long.

As we grew up, stayed in hostels and started working ourselves, this middle-class thriftiness persisted and for good. It taught us the value of money, to spend and yet be judicious, to differentiate between need and want.

Being middle-class was also being sustainable. Parents were in a steady job with a steady income. Most families usually had one property to call their own and an entire lifetime was spent driving a single or a maximum of two vehicles. Television was either black and white or colour and the children had a good two-hours games session every evening. Almost every house had a modest kitchen garden and the food eaten was mostly fresh and local. Cycle was the mode of transport for every youngster and entertainment was mostly outdoors. And of course, there were no shopping malls to splurge on stuff which honestly, we didn’t need.

We grew up observing and learning how to conserve, save and protect whatever we had. The 24-hour water supply was never taken for granted and we were always instructed to switch off fans and light switches when we were out of the rooms, a habit which continues and one which I keep preaching even now.

Electricity bills were monitored every month, the causes analysed for an inflated bill and the expenditure balanced out in the next few months, being mindful of our electricity usage. When I now see people with 24-hour air conditioners in multiple rooms in their houses, I grimace at the colossal waste of precious energy.

We had a maximum of 2-3 pairs of footwear – school shoes, slippers and sandals for outdoor. I was both embarrassed and guilty when I looked at the assortment of shoes I had once amassed and then resolved to stick to a minimum. The same was for clothes and looking at the Indian, Western, and Indo-western clothes hanging in my cupboard now, I am assailed by pangs of wastefulness.

Of course, the middle-class family today is not what used to be though some of the standards still hold. Nevertheless, the ascendence of the middle-class today is linked more to their economic power in fuelling the ever-burgeoning growth of the capitalist economy. And we are all a part of it. The middle class is known today for its increasing purchasing power, materialistic consumption and the culture of instant gratification. The expanding demand for consumer durables, housing, shopping malls, vacations etc. coupled with the digital boom and the rise of our virtual worlds has transformed what it meant to be middle class.

The then middle-class life was a steady one with little highs and lows. A tad boring maybe but it always came with the much-needed comfort of rhythm and structure. It was simple too, with little complexity to muddle our lives. What held us together in times of confusion, upheavals and conflicts were the typical middle-class attributes of family, education and restraint.

I wonder if this still holds true in the fast-paced, consumeristic culture of today. The functional, restrained living of the middle class has given way to uninhibited spending, indulgent lifestyles on credit and changing products every few months. For the new middle class that is new brand conscious and believes in living in the present, there is a blurred distinction between necessity and luxury.

But I am so glad I grew up in the middle class of the 80s. And having tasted the extravagance of the present-day middle class which can afford much more than their predecessors – I can confidently vouch that I don’t really feel a part of it. Without sounding holier-than-thou, I still prefer the dull shine of middle-class values to the shiny lure and glare of the new middle class. A Rs 450+taxes plate of Idli? Nah, never!

Odisha Bypoll: Both BJD & BJP Confident Of Victory In Padampur