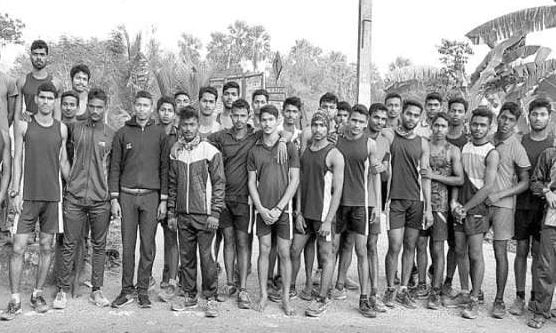 Mahanga:  Here is a man who is serving the nation and its people in two ways. Nityananda Mohanty is a firefighter by profession but training youngsters to join the Army is his passion. His physical fitness is an inspiration to youngsters who aspire to enter the Army.

Fondly called ‘Nitia Sir’, a resident of Sakhigopal area in Puri district, 32-year-old Nityananda is posted at Kuanpal fire station under this block at present. He joined the Fire Services in 2013 and got transferred here in 2015.

Little did he know that a village lad had been watching him go through his daily drills at the JN College Banua ground. Ranjan Swain of Alijoda village used to see Nityananda everyday and approached him for training. “I trained him for physical as well the written tests and he got selected to the Indian Army in 2017,” said Nityananda.

“Seeing me, locals got inspired and started coming to learn the basics of physical fitness and exercises,” he added.

Soon, the news spread and before Niyananda knew it, there was a handful of young boys willing to be trained by him. The number grew rapidly and formed the ‘Banua Athlete Association’. From Nityananda, he became ‘Nitia Sir’. His training helped two more of his students in getting selected to the Indian Army and another one getting a job at Commissionerate  Police.

He has 60 students from poor families belonging to areas such as Mahanga, Salepur and Barchana. under his tutelage and now he trains them all free of cost. In the latest achievement, three boys from his camp were selected to the Indian Army in 2019.

This is not to say that he neglects his duty as a fireman. He trains his students in the morning before going for duty and in the evening after coming back. Boys get training in various disciplines like sprints and long distance running, body power development through lifting weights and pulling tyres, rope climbing, high jump, long jump and hurdles. The club house nearby is used for giving training for written tests and interviews.

Nityananda’s efforts have helped in the positive direction as the youth have become socially responsible. Where they would be bystanders earlier, now they help firefighters to douse fires and the police in case of road mishaps many a time rushing accident victims to hospitals.

Those who trained at Nityananda’s camp are now serving in the Army also don’t forget to express their gratitude. Maneesh and Ranjan Sethi, who came back to the on their first vacation after joining the Army. They prefer to impart training to young boys instead of enjoying their holidays.