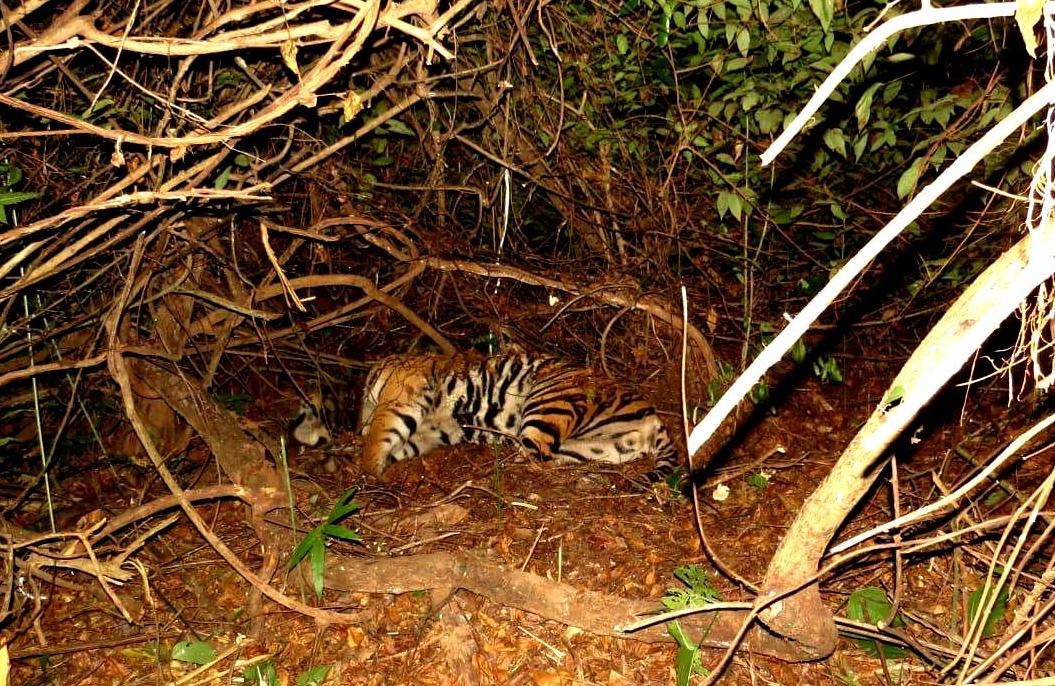 Bhubaneswar: Following the death of Mahavir, a Royal Bengal tiger, inside the core area of the Satkosia sanctuary in Angul district, the National Tiger Conservation Authority (NTCA) on Thursday put the inter-state tiger translocation project in Odisha on hold.

Informing the media, NTCA Additional Director General (ADG) Dr Anup Nayak said following the shocking news about the death of the Royal Bengal tiger brought from Kanha National Park in Madhya Pradesh, it has been decided to put the inter-state tiger translocation project in Odisha on hold. “We are seriously reviewing the matter and will take a decision in this regard later,” he said.

Nayak further informed that a team NTCA and Wildlife Institute of India (WII) will arrive in the state on Friday to probe the cause of the death of the tiger.

Earlier in the day, Satkosia DFO Ramasamy P said had told the media that the tiger monitoring team had informed about the death of the tiger at around 1 pm on Wednesday.

“Following information, we went to the spot and found the tiger lying 500 metres from Raigoda to Nuagacia forest road inside the Nuagarh Reserve Forest of Athagarh Forest Division (which has been proposed to be included in Satkosia Tiger Reserve). Prima facie investigation revealed a deep lacerated and a 5-day-old maggotted infected wound in the dorsal neck region of the tiger, which could be the cause of the mortality. The site of the incident was not disturbed as per the NTCA protocol. The exact reason for the mortality and the time of incident will be ascertained after conducting a detailed postmortem,” the DFO added.

The Field Director, Satkosia Tiger Reserve, has formed a team, comprising government veterinary doctors, representative of National Tiger Conservation Authority (NTCA), local NGOs and others, to conduct the postmortem of the tiger carcass in accordance with the standard operating procedure (SOP) by NTCA, he further said.

“The disposal of the carcass through incineration will be carried out in the presence of the veterinarian team and others in accordance with the NTCA protocol,” the DFO pointed out.

Briefing mediapersons in Bhubaneswar later in the day, Principal Chief Conservation of Forest (PCCF), Wildlife, Sandip Tripathy, said that the death of the Royal Bengal tiger was received at around 1 pm on Wednesday.

Replying to a question on whether radio collar tied to the neck of the tiger could be the reason for his death as there was a deep wound in the neck, Tripathy said this was improbable. “There are around seven tigers in other sanctuaries in the country with radio collar tied on their neck since last 6-7 years,” he maintained.

He, however, said that the exact cause of the death would be known only after the postmortem.

Talking about the deep wound in the dorsal neck area of the tiger, former PCCF Bijay Ketan Patnaik said the tiger might have caught itself in a trap laid by the poachers and sustained deep injuries while trying to escape.

Referring to the recent death of a tiger in the Debrigarh Wildlife Sanctuary in Bargarh district, Patnaik said that the incident should serve as a reminder to the Forest Department that the poachers are active in all reserve forests, sanctuaries and national parks in Odisha.

It may be mentioned here that Mahavir was brought from Kanha National Park on June 20 and kept inside the enclosure at Raigoda on June 21. After observing his behaviour, the Forest officials had released him in the wild of Satkosia on July 6.