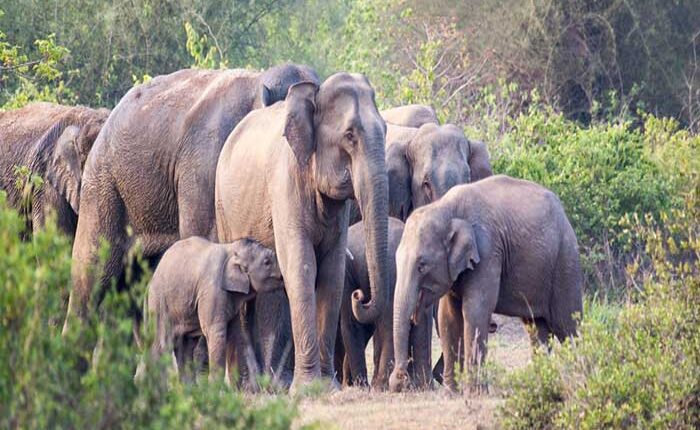 Bhubaneswar: With the changing urban dynamics throttling the vision of the hub of the East, the ‘green lungs’ intended to serve the state capital are on the verge of annihilation.

The vast forests and biodiversity of the Chandaka-Dampara Elephant Sanctuary, once a haven for the highest number of elephants in the state has now turned inferno.

According to sources, the Chandaka-Dampara Elephant Sanctuary is inhabited by only five elephants at present. Forest officials believe rapid urbanisation and migration of the elephants due to food scarcity are the main reasons for their declining number.

However, Secretary of Wildlife Society of Odisha, Biswajit Mohanty explains, “It is too late to protect the sanctuary. The government has provided clearances for development activities around the sanctuary. There are gated communities and institutes coming up next to the sanctuary. The elephants can’t come out of the sanctuary for migration due to heavy lighting in the area. Construction activity should not be allowed at least within a range of 10 km. It is a standard protocol for every sanctuary.”

The sanctuary has been declared as an ecologically sensitive zone (ESZ) but it makes no sense given the vast area. It might turn into a dead sanctuary if the current pace of construction works continues, informed Mohanty.

A lot of money has been invested to prevent the poaching of elephants. Planting of various species of trees and construction of ponds for drinking water and attracting tourists to the Elephant Sanctuary are some of the steps that have been taken. But lack of staff, the timber mafia and forest department employees nexus, reduced forest cover, and the closure of elephant corridors have led to an unexpected decline in the number of elephants here.

“The purpose of the sanctuary will be lost soon if these elephants aren’t protected. The condition is quite deplorable. There are four villages and farming activities are prevalent inside the sanctuary for the past 30 years,” added Mohanty.

Earlier, a patch of forest situated in the suburban area of Bhubaneswar was declared protected. Later, a limited area of 193.33 sq.km and 174 km in perimeter was declared as Chandaka Elephant Sanctuary in 1982, owing to its conducive environment.

“The government has to redesign everything that is related to development. There are many examples and models of natural corridors for the safe passage of animals. The government can adopt these for the elephants here too,” said Ranjan Panda, Convenor, Water Initiatives Odisha.

Moreover, he apprehends that the sanctuary may fall prey to the real estate lobby very soon. “A handful of elephants are not a hindrance to such lobbies. The government should start working on preventing these animals from getting extinct from the sanctuary.”

The research on Chandaka-Dampara Sanctuary was last done in the 1990s. The last Elephant Census Evaluation was done in 2017 and is scheduled every years, informed Mohanty.

Among a host of other reasons, environmentalists rue the apparent lack of interest in conserving pachyderms and other species in the sanctuary.

Given such deplorable conditions at the Chandaka Elephant Sanctuary, the possibility of the elephants going extinct from the forest reserve in the near future cannot be ruled out.