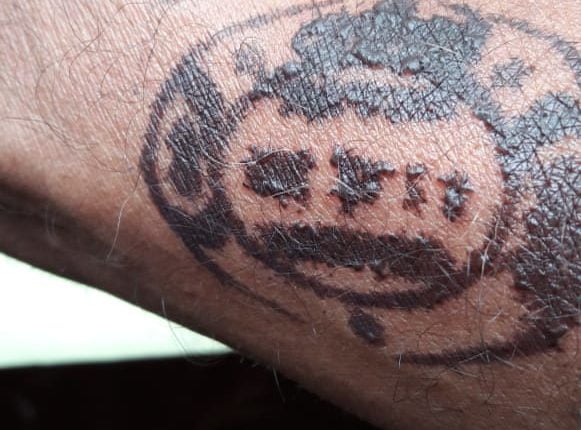 Bhubaneswar: The stamping of the returnees as a precautionary measure against coronavirus has thrown up another health scare. It has led to scalding, irritation and rashes in some cases,  while the BMC remains evasive to the complaints.

In the wake of the COVID-19 pandemic, Odisha government had made quarantine mandatory for the people coming to the state. In order to identify them, they are stamped with indelible ink on their arrival at Biju Patnaik International Airport here.

Though the initiative is serving its purpose with the cooperation of the people, questions have been raised on the chemicals used in the ink which has caused skin problems as in case of a returnee from Goa.

“I returned from Goa via New Delhi to Bhubaneswar on July 5. On arrival at the airport, I was stamped on the right forearm. A few hours later, rashes developed in the stamped area,” said the passenger.

As a responsible citizen, he contacted the Bhubaneswar Municipal Corporation (BMC) authorities so that remedial measures could be taken. But there was no response to his complaint. “On July 6 morning, I told the BMC Nodal Officer about the problem but have not received any response,” he said.

“No doubt, BMC officials, doctors and other corona warriors are doing an excellent service to the society at this critical juncture. My intention is not to blame anyone. But they should check the chemicals used in the ink and ensure that it does not contain anything harmful to human skin,” he said.

When Odisha Bytes contacted the BMC officials, they passed the buck to one another instead of taking a serious note of the issue. Shubhra Ranjan Sahoo, Nodal Officer, BMC admitted to have received a complaint. But he said the Deputy Commissioner, BMC should be contacted in this regard as he is in charge of it.

On his part, Deputy Commissioner, BMC, Pramod Kumar Prusty said, “I am not dealing with these stamping and health hazard cases related to it. Contact the head office or the Nodal Officer who looks after the quarantine issues. However, the affected passengers may contact me personally and we will refer to the doctors to deal with it.”

The returnee is not the first person to complain about skin problem caused by the stamping at the airport. Similar cases have been reported many times in different media last month.

Amid US Visa Concerns, Infosys Brings Back 76 Staff And Their families