Ready For Act II Scene I At Cuttack’s Annapurna Theater-B? 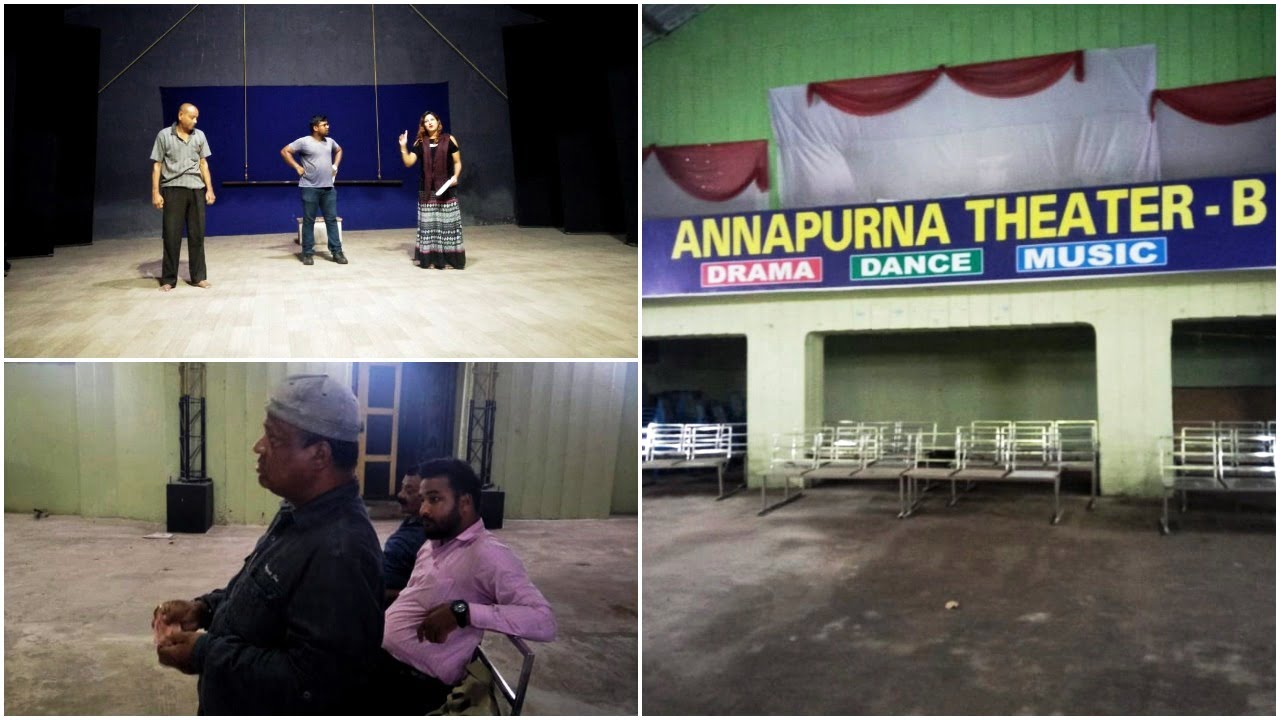 Cuttack: Hectic activity was on at Annapurna Theater-B near Buxi Bazaar here on Saturday, two days before the curtains go up for the second play this year, at 7pm on Monday.

It will also be the second play since the theatre was rebuilt after a portion of its roof collapsed on September 15, 2015.

The upcoming play is based on ‘Budha’, a story by Nrusingha Charan Das. Play director Juga Prakash Kanungo, who is also the theatre president, was yet to decide on a name for the play. “I plan to name it after Aurangzeb. Like the Mughal emperor, the central character here, too, ditches his father,” he says, before suddenly shouting at an actor rehearsing on the stage. “You there, I keep telling you not to start laughing or weeping immediately after hurling away that newspaper with the earth-shattering news. You have to just become numb, look up and then walk like a robot, without any feeling, till you can laugh or cry hysterically.”

In between directing, giving inputs to his crew to serve snacks to everybody, Juga gets a brainwave. He asks for a piece of paper, on which he first struggles to write with an offered dot pen, and, when it wouldn’t write, takes out his own classic fountain pen with which he scribbles something in large fonts. “This will be the name of the play,” he tells them, instructing everybody to keep it under cover.

He was soon back on his feet, as a girl fell after hitting a bench on the stage while running. He assures her she should be fine, almost brings her back to her feet with his words and persuades her to enact the scene all over again.

A moment later he asked his aide not to prompt dialogues to an actor who just wouldn’t remember his lines. “Just one more day left. When will you learn those lines,” he yells, before turning around and telling his backers, “My creatinine has shot up. What do I do now?” Someone suggests he take soup of coriander leaves. “Really? That works? I have had umpteen cups of that soup. Hasn’t helped me so far.”

He then gets busy telling others that the theatre needs cleaning, mikes so that the dialogues are audible, lighting and more.

There are just a few chairs for the crew. “Around 250 people had turned up for the last show, in February,” says Juga. “That play was Amanisa. No play was staged after that, as a tribute to our CRPF men killed in Pulwama.”

What’s the theatre scene like in Cuttack? “Not much of a scene, right now,” he says. “It’s already curtains for Janata Rangamanch. Kalasree theatre in Badambadi is also in a bad shape. Shady things take place there now. But we shall revive it, just as we rebuilt Annapurna Theatre B.”

It’s called theatre B, because it’s other sister, theatre A, is in Puri. The founder of both theatres was Somnath Das from Balugaon in Banapur. He specialised in mobile theatre, going from place to place and staging plays in 1933. Later, in 1937, Odisha’s first theatre came up in Puri. That was to be Annapurna A group.

The B group in Cuttack came up in 1942. “Before the theatre came up here, there used to be a cinema hall. It was initially called Halmukh, and later Prakash Film Hall” Juga says. “Somnath took the premises on rent, for Rs 2 a month, to set up a theatre and stage plays here.”

The B group’s theatre was registered under the name ‘Annapurna Theatre B’ sometime in 1981-82. Juga became its president in 2006 and proudly claims that some 113 plays have since been staged here since, despite an almost four-year gap when the place was shut down after the roof collapse.

He has more plans for the place. He wants to open an aerobics-teaching, Zumba, vocal and classical academy on the premises. “Odissi will be taught too,” Juga says. Children were seen learning dance moves at an adjoining hall. “There will be a modern dance school here, an academy is my plan.”

Cuttack Bird-Lover Shines As An Example Of Humanity During…