Shashi Tharoor Gets His Facts Wrong On Rath Yatra 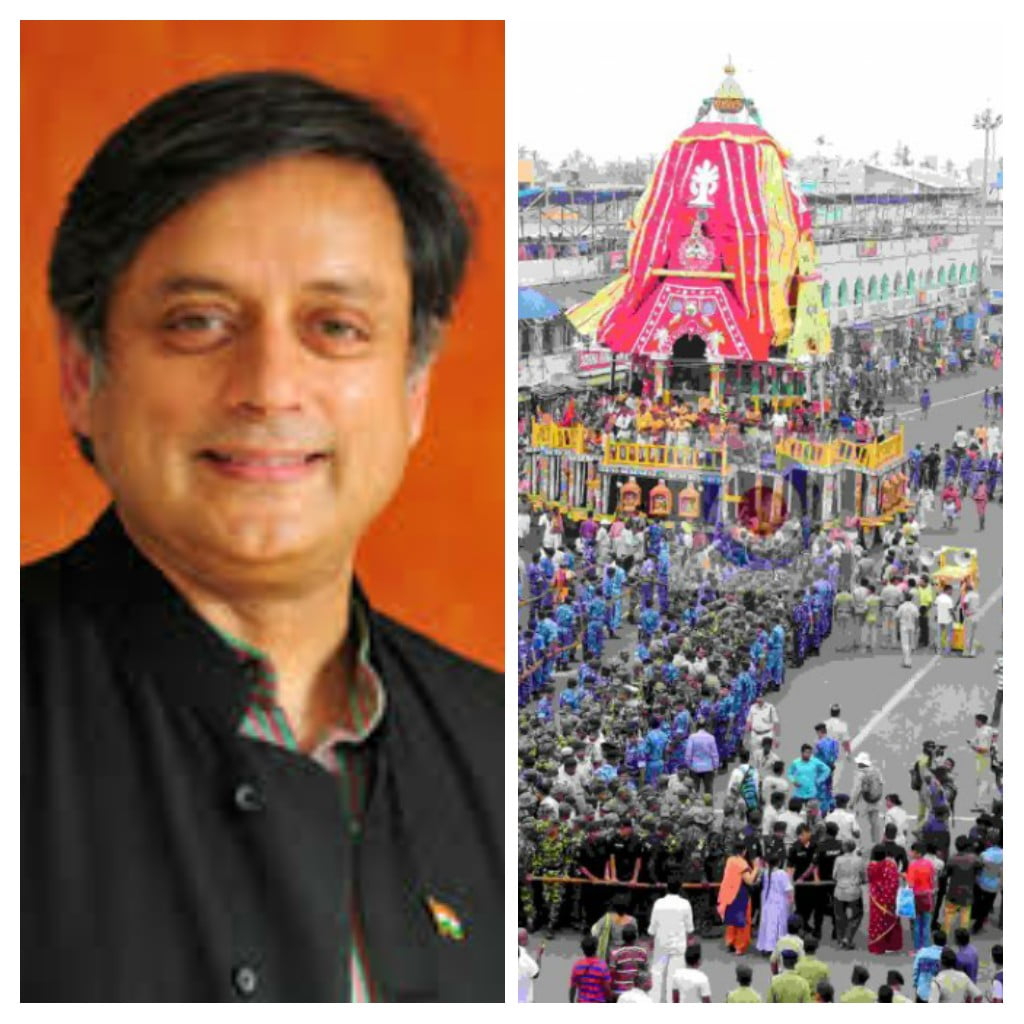 Shashi Tharoor is a word juggler and more often than not has people scurrying for a dictionary. In his latest piece on Shashi Tharoor’s Word of the Week, he picked the word ‘juggernaut’, the Anglicized name for Jagannath.

The article is an attempt by the Congress MP to quash the negative connotations associated with Lord Jagannath and Rath Yatra, which he describes as “falsely distorted tales about India” by the colonial rulers. Referring to the 14th century travelogue of John Mandeville and his description of Hindus being crushed to death under the enormous wheels of the chariots, Tharoor wrote: “Hinduism in fact has no concept of such human sacrifice; if Mandeville really saw a Hindu killed under the wheels of a chariot, it can only be because a poor devotee stumbled and accidentally fell upon the path in the tumult and the enormous chariot could not easily stop or swerve on the narrow road.”

However, in his vehemence to defend Hindusim and break this ‘false image’ of the Lord, the author of 18 bestselling works too got his facts wrong about the sibling deities and the rituals of Jagannath Temple in Puri.

It is only once that Lord Jagannath, along with his siblings, is brought out of the temple. On other occasions like Chandan Yatra, his representatives are taken out in a procession.

“The deities step out of the sanctum sanctorum on Snana Purnima. They are brought to the bathing altar on the temple premises for the divine bath and then they retire to the anasara ghar (sickroom) for 15 days before embarking on the annual sojourn,” said Soumendra Muduli, servitor and Jagannath scholar.

2. This is when the idol is wheeled to the Puri temple in an enormous chariot

The sibling deities leave the Puri temple, which is otherwise known as Jagannath Temple, for Gundicha Temple for the nine-day annual sojourn.

“The Bahuda Yatra, when they return to the abode, commemorates the installation of the idols in the temple in 1451,” said Prafulla Rath, an expert in Jagannath culture.

3. Devotees line the streets in a frenzy, hailing the Lord with chants and prayers and craning their necks for a glimpse of the deity seated in the chariot, followed by lesser chariots bearing statues of his brother Balarama and sister Subhadra.

The chariots of Balabhadra (and not Balaram) and Devi Subhadra can by no means be called lesser, said Muduli.

Nandighosha – The chariot of Lord Jagannath

Taladhwaja – The Chariot of Lord Balabhadra

Devadalana – The chariot of Devi Subhadra

4. By the 18th century, juggernaut was in common use as a synonym for an irresistible and destructive force that demands total devotion or unforgiving sacrifice — the sense in which it pops up in the novels of Charlotte Bronte and Charles Dickens, and even Robert Louis Stevenson, who applied it to Dr Jekyll’s foil, Mr Hyde. It was only Mark Twain, in his autobiography, who described Juggernaut as the kindest of gods; and indeed the millions of worshippers in Puri will tell you that Lord Jagannath is a figure of reverence, not of fear.

‘Juggernaut’ entered the English language in the early 19th century. Reverend Claudius Buchanan, an Anglican chaplain and a staunch supporter of Christian missions to India, presented ‘Juggernaut’ as a dangerous, violent, and bloody religious cult. In Christian Researches, published in 1811, Buchanan described devotees throwing themselves under the wheels of Juggernaut’s chariots.

He wrote: The idol called Juggernaut has been considered as the Moloch of the present age; and he is justly so named, for the sacrifices offered up to him by self-devotement are not less criminal, perhaps not less numerous, than those recorded of the Moloch of Cannan.

And he may not be entirely wrong. “It is a belief that the one crushed under the wheels of the chariots attain salvation. There are references to such incidents in ‘Madla Panji’, a chronicle of the Jagannath Temple, Puri,” said Muduli.

Rath said that many leprosy patients made Puri their home in the 17th century with the hope that the Lord would cure them. “There have been instances of people being total cured. However, there may also been incidents when people chose death to the pain and voluntarily sacrificed self before the wheels of the chariots,” he added.