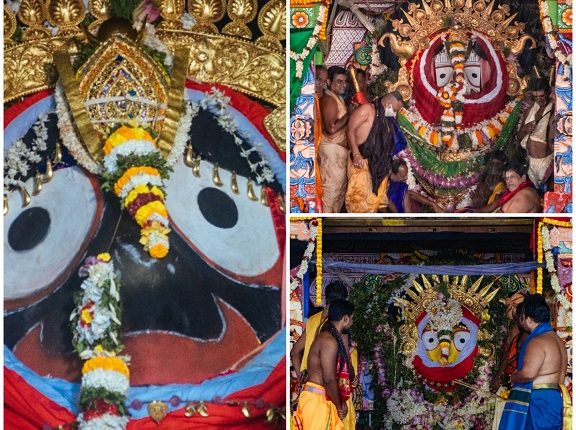 Puri: The ‘Suna Besha’ ritual of Lord Jagannath, Lord Balabhadra and Devi Subhadra is now under way in Odisha’s Puri.

This ritual is observed on Ashadha Shukla Ekadashi Tithi on the 11th bright fortnight in Asadha, a day after the sibling deities return to Jagannath Temple after a nine-day annual sojourn to Gundicha Temple in the Pilgrim Town.

Legend has it that ‘Suna Besha’ began during the reign of King Kapilendra Deb in 1460 when the triumphant king brought 16 cartloads of gold to Puri after winning wars over the rulers of the Deccan (Southern India).

He donated the gold and diamond to Lord Jagannath and instructed the temple priests to get ornaments crafted out of them.

The gold ornaments are stored in the bhandara ghar. Escorted by armed policemen and temple officials, bhandara mekap priests (store in-charge) bring the gold jewellery laced with invaluable stones and hand it over to Puspalaka and Daitapati priests.

The deities were decked up with gold ornaments of nearly 138 designs during the era of Kapilendra Deb. The number has come down to 20-30 now.

The designs are still intact. They are repaired as and when required using raw gold donated by pilgrims.

The gold ornaments are refurbished every year ahead of Suna Besha.