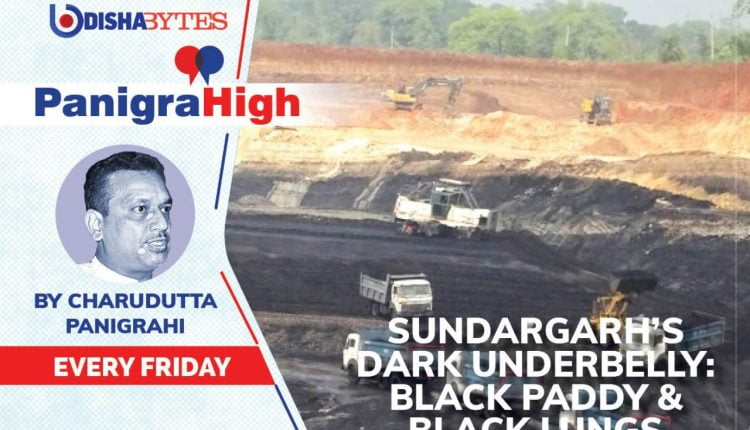 Henceforth the idiom ‘as white as snow’ would seem so much out of place. In coal mining regions of Siberia, the Kuzbass area, the snow is black. The landscape is covered with toxic black snow as it takes on the colour of coal dust from open-pit mines. The health of the people there has been severely damaged. Cases of cancer, child cerebral palsy, and tuberculous have spiked over the years. The black envelope is so thick and spread out that it’s harder to find any trace of white snow. More so during the winter. After a snowfall, it is black everywhere.

The paddy of Sundargarh district is black. Hemagir block of the district is enveloped in black toxic coal dust exacerbated by the trucks ferrying coal from nearby open cast mines. The coal mining and the dust produced impact both lives and livelihoods of the local population.

Chronic obstructive pulmonary disease (COPD) cases are on the rise in the entire region. In the last decade, such cases have gone up by almost 45%. The health effects associated with coal mining are severe. The coal miners are exposed to crystalline silica dust, which causes silicosis, COPD, and other morbidities. These lung diseases have resulted in impairment, disability, and premature deaths. Black lung disease occurs with the inhalation of coal dust over a long period of time. It mainly affects coal miners, and that is pneumoconiosis. Vulnerability to COVID-19 also increases manifold.

Compared to the general population, the coal belt population have higher incidences of respiratory illness and Hemgir block is no exception. Ratanpur, Chhatabar, Luabahal are among the worst sufferers. The coal mining resultant dust has not only surged the morbidities and the mortalities in the area but has also directly hit the livelihoods of the farmers. Suru Mishra, popularly called Suru Babu, is a prominent social engineer and activist working on socio-economic issues of the marginalised in Sundargarh. He has been consistently advocating for safer living conditions for the people. He has been championing “responsible coal mining’.

There are no takers for the discoloured paddy. Millers & LAMPCS (Large-sized Adivasi Multipurpose Cooperative Societies Ltd (Gopalpur and Luabahal) refuse to procure black paddy. Black rice might sound exotic and contain high protein, and it gets it’s signature black-purple colour from a pigment called anthocyanin, which has potent antioxidant properties. But the discoloured black paddy of Hemgir block is cancer-inducing poison. The Kulda and Basundhara mines are the culprits with coal dust polluting swathes of agricultural fields and acres of water bodies.

The district, block agriculture officers, the soil scientists have conducted extensive ground inspections and have reported officially that the discolouration of the paddy is so thick and deep-seated that even after washing the traces of black dust particles, the tar-like paste remains on the surface of the grains. The deposits get thicker and intensely layered. Around 3,500 trucks pass through the 45 villages daily spewing toxic dust. Cruel but true that the indigenous communities, Hill Khadia, Bhuyan and Gonds, are most affected. The air is a lethal mix of coal and fly ash. Every breathing organism in the area is severely afflicted. Vulnerability to Black Lung disease is dangerously rising.

Many reports have been written and the locals have voiced their appeal for the right to life.

The Ministry of Environment, Forest and Climate Change (MoEFCC) had instituted a site inspection and monitoring report, about three years ago, which stated that the concentrations of particulate matter PM10 and PM2.5 were above permissible limits in the area. The report suggested that more sprinkling and control measures needed to be undertaken on priority. Despite local suffering having been widely expressed, the expert appraisal committee (EAC) of MoEFCC recommended environmental clearance for expanding the capacity of the Kulda open cast coal mine by 20%.

What about the people, their next generations, their health, agriculture, and water bodies?

The mine’s output will now increase from the current 14 million tonnes per annum (MTPA) to 19.60 MTPA. Mahanadi Coalfields Limited (MCL), the mine’s owner, is expected to plant 100,000 native trees with broad leaves along the villages and 50,000 trees along the transportation route.  Can it be implemented on the ground, or the number attained in two years?

The MCL has also been directed by the ministry to install air quality monitoring stations in the mining area. So far, there has been no monitoring of the dust emissions from the entire mining operations, including the transportation. The transportation companies and the mining companies work in cahoots. The scale of the expansion should not further marginalise the local communities and push them to a dark life with an increasingly violent onslaught of land acquisition, displacement, corruption, intimidation, and toxic, killer pollution.

Health emergencies are rising, the livelihoods of the local farmers are dwindling, agricultural lands are acquired for mining and the youth are rudderless, jobless.

In Ratanpur village, 25 acres of cultivated land was recently acquired for mining. The scheduled castes and tribes in the area are small, marginal landholders, who traditionally cultivated in the adjoining forests. Even their claims for titles/patta for the forest land under the FRA have gone unheard.

The coal companies are obviously trying to earn millions of carbon credits from the coal expansion. Nothing should stop that, but this should not be at the cost of human lives. The number of environmental protests is on the rise. Coal is one of the cornerstones of climate diplomacy and we in Odisha are grappling with rejuvenating the economy after the coronavirus pandemic and recurring natural disasters.

Disclaimer: The opinions expressed in this publication are those of the authors. They do not purport to reflect the opinions or views of the web portal or its members.