London: Tennis legend Roger Federer on Thursday announced his retirement from competitive tennis after next week’s Laver Cup in London.

The 41-year-old, considered by many pundits to be the greatest ever male tennis player, won 20 Grand Slam titles.

The Swiss maestro has been out of action since July 2021 when he lost in the Wimbledon quarterfinal to Poland’s Hubert Hurcakz. He underwent knee surgery thereafter thrice and never regained fitness to return to the court.

In an emotional statement to his fans, Federer wrote: “To my tennis family and beyond, of all the gifts that tennis has given me over the years, the greatest, without a doubt, has been the people I’ve met along the way: my friends, my competitors and most of all the fans who give the sport its life. Today, I want to share some news with all of you.

“As many of you know, the past three years have presented me with challenges in the form of injuries and surgeries. I’ve worked hard to return to full competitive form. But I also know my body’s capacities and limits, and its message to me lately has been clear.

“I am 41 years old. I have played more than 1500 matches over 24 years. Tennis has treated me more generously than I ever would have dreamt, and now I must recognise when it is time to end my competitive career.” 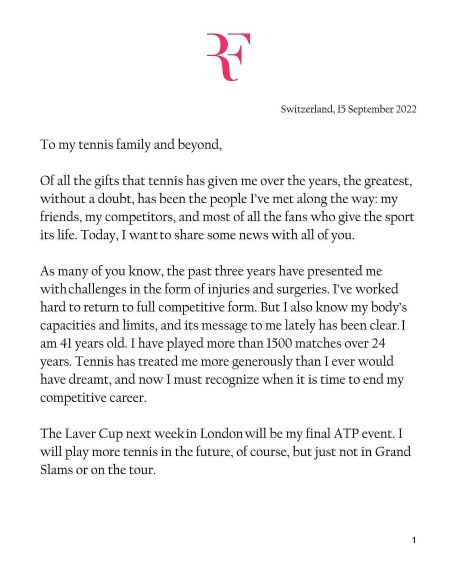 He may be third on the all-time Grand Slam winners’ list – behind his close rivals Rafael Nadal (22) and Novak Djokovic (22) – but Federer owns several records.

He won a record eight Wimbledon championships and a joint-most 5 US Open titles in Open era.