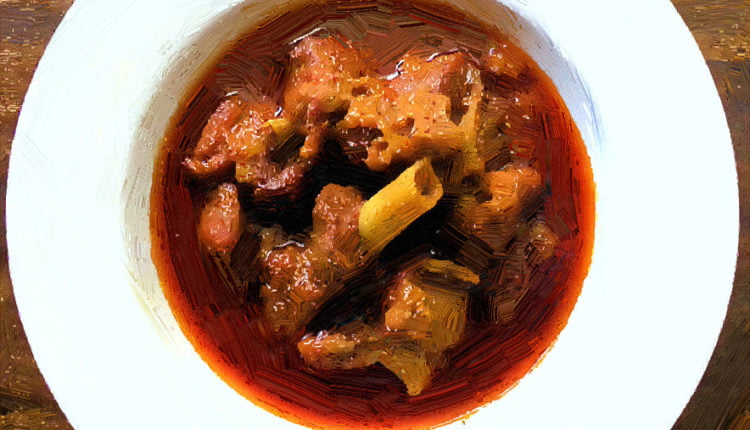 The deep red lamb curry known as ‘Roghanjosh’ is now a ubiquitous Indian restaurant staple. This elegant dish is known to have its origins in the valley of Kashmir. What is less well known is that unlike wazwan, the splendid Kashmiri Muslim banquet, Roghanjosh is a coveted Kashmiri Hindu entrée. Roghanjosh being the jewel of all lamb dishes served on special occasions. Every eatery serves the mutton concoctions of varying taste and hue, all baptised as Roghanjosh, but few bear the faintest resemblance to the Kashmiri classic. 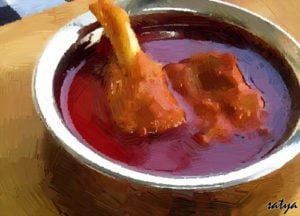 Which brings us to a pertinent question, what exactly does ‘Roghanjosh’ mean?

In the Kashmir valley Hindu or pandits and Muslim cuisines have admittedly, gone their separate ways. The Muslim community took a delicious direction via sensuous aromatic bulbs such as garlic, shallots and onions, using them to mouth-watering advantage, reaching its zenith in the aforementioned Wazwan cuisine. The Hindus excelled by substituting these ingredients with alternatives such as the resin, hing, or asafoetida.

There are two types of Roghanjosh, one made by Kashmiri Muslims and the other by the Kashmiri Hindus or Pandits. I beg to disagree, and reiterated the acknowledged cuisine divergence in Kashmir. My Kashmiri Muslim Chefs concurs and agrees in delicious unison that Roghanjosh was a Pundit dish, famously and impossibly made without onions or garlic. Even the name, ‘Roghanjosh’ the term used to describe colour in Kashmiri/Urdu which is ‘rang-roghan’ where ‘roghan’ means red. Thus name of the dish referred to the fiery red colour of the sauce and since ‘josh’ means fiery, it all seemed to fit in quite nicely. Some say ‘roghan’ could also mean ‘essence’. That may be right.

In Persian ‘roghan’ is ‘rohan’ which means purest form, presumably from ‘rooh’ or soul. There is a distinct possibility that Roghanjosh might have a connection to Persia. As Kashmiri cuisine, is heavily influenced by Persian and Ottoman (Turkish) cooking. Kashmiri’s always make Roghanjosh from meat-with-bone cuts, preferably thick lamb chops, which incidentally, is also a word of Indian origin. It comes from the Hindi word ‘chhaap’ or ‘stamp’ of the meat inspector during the Raj. The snowbound winters, in Kashmir made everyone, ferocious meat eaters Kashmir, thus every bit of bone, gristle, innards and organ is put to good use. In a valley where adept Muslim butchers made perfect one piece trachea-lung-kidney-liver offerings for the reigning Hindu goddess, and still pulverise lamb for ‘kofta’, or meat-balls, to a pulp with just a cleaver on a wooden block, a filet is a completely wasteful and wimpy idea. Thus boneless meat for Roghanjosh lacked that most important culinary ingredient, authenticity.

Thus, “How old is Roghanjosh?” The spice ingredients of Roghanjosh are mostly non-indigenous to the Kashmir region: red chilli pepper, cardamom, cloves, fennel seed, ginger, cinnamon, bay leaf, cumin, some brought over by the Portuguese from the New World, some imported from South India or South East Asia. So it has to have been as old as the discovery of the New World at least seeing that the distinguishing ingredient, apart from the lamb, is chillies. It may be difficult to say when and how in the evolution of Kashmiri food, did the consumption of a rudimentary leg or shoulder of lamb morph from being a survival strategy to a culinary classic. It would however be safe to estimate that this process occurred several centuries ago.

The sizes of the piece of Roghanjosh indicate the heart or the generosity of the family, but it is the taste that tells you everything about the kind of stock they are from. For the ignorant a flaming red curry constitutes Roghanjosh, for the cognoscenti only a subtly scented and judicious mix of cayenne and yogurt will pass muster.

There is no Kashmiri Hindu celebratory meals left in Kashmir as of now, with the Pandits having fled their cherished valley, what, if any, is the real recipe for Roghanjosh now? Will it be a slow death or will it exist in a diluted form. Or does it bring in a debate to say that there are no authentic recipes; otherwise Italians would say they have been eating Chinese food all along. Or is it the other way around, Marco Polo?

INSTRUCTIONS:
1. Stir chilli powder, fennel, ginger, asafoetida, and ½ cup water in a bowl into a paste; set aside. Combine cumin, green cardamom, mace, and cinnamon in a spice grinder; grind into a powder and set aside.

2. Melt ghee in a 6-qt. saucepan over medium-high heat. Cook black cardamom until fragrant, for 1–2 minutes. Season lamb with salt – cook, turning as needed until browned, 5–7 minutes. Add reserved paste, the saffron, and 2 cups water; boil. Reduce heat to medium-low; cook, covered, until lamb is tender, 45 minutes to 1 hour. Stir in reserved spice powder; cook, covered, until lamb is very tender, 40–45 minutes. Garnish with cilantro; serve with rice or naan if you like.