The ‘Nimantrana’ Should Be For Affordable Odia Thali, Not A La Carte Menu 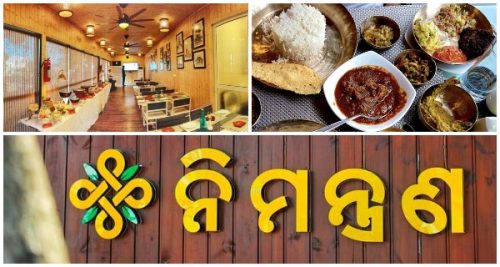 It is called American sweet corn on the streets of Bhubaneswar although grown in Rambha, Buguda or other places in Odisha’s Ganjam district. It is just like a cake baked in Bhubaneswar being passed off as a product of Paris, England etc.

Most Indian cities have a food street that does business till midnight and sells local dishes as an identity of the city’s history. Like Bhatiar Gali in Ahmedabad, Sarofa Bazaar in Indore, Paratha Gali in New Delhi. These streets are famous because they don’t produce items that do not belong to the place.

Such streets are there in Odisha too — be it in Berhampur, Bhubaneswar, Puri, Sambalpur, Dhenkanal, Koraput, Baripada etc. But over the years, they have lost their identity as Chinese, Italian, Thai, South Indian items have taken over. The result is that we have almost no presence within Odisha or outside, forget foreign soil.

A friend had taken me to a popular street food locality in Bhubaneswar, where she ordered a Mexican sandwich, Italian pizza and an American burger. It did surprise me, and I asked out of curiosity why she ordered all European and American items? She said since I have been across the globe, I would like it.

The prices were not that cheap, but when the dishes arrived, the taste wasn’t Mexican, Italian or American. It was like having Chinese noodles with Indian spices instead of herbs.

I got the feeling that everyone out there wants to prove they are living a cosmopolitan life. So the product has to be international. Selling a Berhampur-style pakoda or Dhenkanal-style bara won’t create magic or fetch cash unless and until it gets an English name. Like once upon a time, not very long ago, chenna poda was called pan cake by none other than Odisha Tourism Development Corporation (OTDC). In reality, there is absolutely no similarity between Odisha’s chenna poda and American pan cake.

Nowadays, you get biryani for breakfast, lunch, evening snacks or dinner on the streets of Bhubaneswar. And they are sold by the names of Hyderabadi, Kolkata or Lucknowi biryani – not Bhubaneswar biryani – even though they taste completely different.

Ditto for a pack of Koraput coffee, which tastes Italian rather than a product of Odisha.

Similarly, we fought for ownership of rasagola’s origin. A popular TV show on food travel, however, said its origin was Pahala, not Puri. Likewise, chapana bhoga of Lord Jagannath has been linked to Mathura.

Odisha does offer a variety of food, but its appetizers are changing locally. That’s where Odisha is lagging in terms of popular food-based tourism.

An intervention is needed to bridge the gap. The state-run OTDC should step in, not as charity but to provide an authentic competitive market. OTDC has recently opened Nimantran for serving authentic Odia food to its customers. It has several items on its menu, some of which are never heard in Odia households, while many are very expensive for appetizers.

OTDC must realize that a large segment of the market is yet to be tapped in popularizing Odisha products. Like unlimited Odia thali for breakfast, lunch, evening snacks and dinner within affordable price. Just as Andhra, Gujarati, Rajasthani and Punjabi thali are popular, Odisha must have its presence in the market. These thalis are served, ranging from Rs 30 to Rs 300, with unlimited servings. This not only generates profit but also creates huge brand value for tourism.

Unless we revisit our glorious food history, what is the point of fighting in other forums for Odia swabhiman? Whether it gets due identity or not, there are a few products related to agriculture and food that deserve the tag of Odisha product.

Showcasing event-based photos may fetch some likes on social media, but won’t help in creating a market.

Odisha must move beyond streetside Nimatran counters to popularising Odia thalis across the state, nation and try and go global. A clear window of opportunity is waiting for a public sector undertaking like OTDC to explore and exploit.

(The writer is a Bhubaneswar-based urban planner. The opinions expressed within the content are solely the author’s and do not reflect the opinions and beliefs of the website)