The Personal Is Always Political 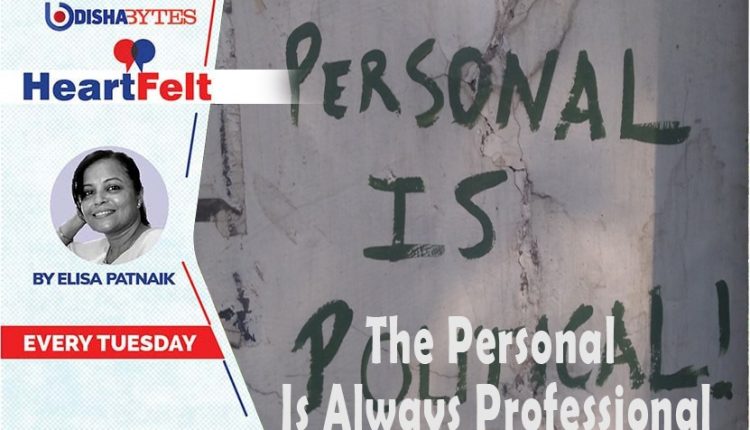 How often have we used phrases like ‘office politics’, ‘family politics’ and also ‘marriage politics’. And yet, we continue to shy away or refrain from voicing our opinions when it comes to recognising the existence of the all-pervading politics in our everyday and personal lives. For some, politics is even a dirty word, to be kept at an arm’s distance.

Politics is broadly and commonly defined as activities that relate to influencing the actions and policies of a government or getting/keeping power in a government. But politics is not only about political parties and affairs, elections, governments and political ideologies. Or just about legislation, policy, theories and philosophies.

Although described as “the art or science of government” and “political principles”, it can and often does carry negative connotations such as artful, cunning, partisan. A person engaging in politics which may be damaging, is labelled as someone ‘playing politics’, It is because of these negative implications that many of us develop a typical image of politics and want to steer clear of it, or simply ignore it.

But in reality, politics is a multifaceted construct and phenomena affecting all of us in some way or the other. And we need to step beyond the narrow definition and recognise how politics is quite often at the centre of everything we experience and do.

In a wider sense, politics is a competition between competing interest groups or individuals for power and leadership – in a government, country, region, institution, society, community, family, relationship. While we acknowledge the power play among and within political parties and in the election process, we often fail to recognise it in the prevalent socio-economic structures and institutions. Nevertheless, it’s useful to unpack what this contest is about and the way in which it plays out across spheres.

In a  socio-economic point of view, politics is about who gets what, when and how. The allocation, distribution and access to material and non-material resources determined again by historic and prevalent structures, institutions.

Politics plays a large role in people’s personal relationships and spaces as well. Think about your feelings and response if your child marries someone from a different religion or from the opposite political party. Even our political ideologies inevitably affects how we relate to one another in intimate relationships and spaces. Allegiance to a political party or an ideology influences how we think and develop opinions on a range of issues around us.

In our personal spheres, it’s also about beliefs, principles, worldviews and how we apply and practice them in our lives. It includes our socio-cultural, religious, sexual identities and recognition too. For example, our understanding, insights and perception about equality, equity, justice, humanity greatly influence our personal lives. This too is politics.

For example, the way we regard LGBTs definitely impacts our behaviour and acceptance towards them. Our strong religious beliefs is sure to influence our acceptance of a person of another opposing religion into our family. So, the Personal is indeed Political.

Personal is Political – is a common belief among feminists that the personal experiences of women are rooted in their political situation and gender inequality. It became popular after American feminist Carol Hanisch published an essay by the same name in 1968. The essay contended that many personal experiences (especially those of women) can be traced to one’s position within a system and structure of power relationships.

Hanisch’s famous essay focused on men’s power and women’s oppression. For example, if a woman is being abused by a male partner, then the societal oppression of women due to gender inequality and patriarchy is an important factor explaining this abuse. The phrase became popular during the Second-wave feminism and continues to inspire women’s movements all around the world.

Feminists and sociologists also maintain that all relationships between men and women are based on power, dominance and the existing socio-cultural hierarchy. And the way girls and women are treated in the private sphere is a political issue. Some feminists view the home and the domestic environment as a setup for oppression and patriarchy, as men and women continue to follow and practice the expected roles and responsibilities in tune with prescribed gender norms. The role of men and women in the domestic space and going by gender norms underline the politicisation of the personal as it represents the way gender politics and patriarchy influences men and women’s behaviours and lives.

Many times private experiences are often shared. For example, issues such as violence against women, lack of abortion and birth control rights etc., are issues which are experienced by many women across varying backgrounds, geographies and cultures which unites them. It also underscores that personal experiences can be collective. The personal experiences shared between women makes them political as they are based on social conditions perpetuated by patriarchy and gender politics.

The so-called ‘personal’ issues are also affected by the existing laws and its enforcement. Marital rape, for example, occurring in the private and intimate space is yet to be recognised as an issue of gender violence and is excluded from the public political sphere of legal intervention. Quite often, cases of domestic violence are easily dismissed by law enforcers as a ‘family issues’ when, in fact, the personal is actually political.

“Politics doesn’t affect my life” – is the impression that many of us continue to harbour. Little realising that every aspect of our daily lives is influenced by politics. From decisions regarding our bodies and families (abortion and pregnancy related laws, no of children, family planning) and education (fee structures, access, methods & content of teaching) to our incomes (taxes, price rise, access to work, work environment) and environment (law and order, access to natural resources, climate change) – the list is endless where  politics has a direct bearing on our daily lives. Who we are, where we belong to, our position in the socio-economic strata, is impacted by the politics around us.

Also Read: My Patriotism Vs Yours

The common view that politics is unrelated to everyday life is thus a limited view because politics is about our lives. We realise that governments make decisions that affect our everyday life. But do we also realise that we have the power to influence it as well? By being politically conscious and by not perceiving politics as something distant and public but personal as well.

We have seen how personal and individual lives are gravely affected by politics and political changes. Society too changes according to politics. Our freedom to live, eat and drink, dress, enjoy, get educated, marry, travel…are all impacted by the political environment around us.

What we do in our own individual lives and the way we lead our lives is also politics. Our world views, political ideologies, beliefs and values affect our decisions both within and outside our homes.

So, it is important to care about politics. We should not only know what is happening in our lives and around us, but also understand why it happens, and have a say in it too. Not just the way we vote during elections but also the way we understand long-standing social constructs and narratives, which quite often impact ours and society’s equality, equity, freedom and justice.