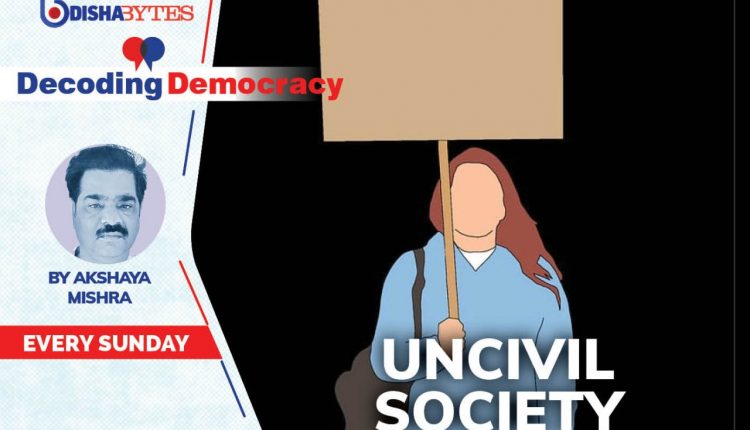 No fundamental social change occurs merely because government acts. It’s because civil society, the conscience of a country, begins to rise up and demand – demand – demand change.

The public opinion of civil society has been less than civil in recent days. It is intriguing. Why would the dislike of an institution dedicated to serving people be so intense? Perhaps like all other institutions in the democracy, it is in a crisis of credibility, and legitimacy. Like them, it has managed to alienate the very people it is supposed to serve. Let’s go deeper.

A clear definition eludes civil society. A serviceable one is these are non-government, non-profit groups and organisations dedicated to protecting and promoting the interests of the citizenry. In the layman’s perception, it’s interchangeable with a non-governmental organisation (NGO) – they are different in scope and character but since NGO is the dimension of civil society we are more familiar with, let’s treat them as interchangeably. Whatever it is, civil society occupies an important space between the government and the people. Besides bridging the gap between the two, it serves as an agent of social change through micro and macro-level intervention.

The idea of civil society – it is plural by character but this article treats it as a singular entity for the convenience of readers – goes deep in history, from the days of Aristotle, and its role and goals have kept changing according to political and economic circumstances in different geographies at different points of time. It has been instrumental in mobilising people against individual and one-party dictatorships across the world and expanding the concepts of human rights, social justice and economic equality among the masses. In India, it has played a stellar role in deepening democracy, giving the marginalised a voice and changing lives for the better at the community level. From the days of Jawaharlal Nehru to the present, all governments have co-opted the civil society in major initiatives in several areas such as public health, education and economic upliftment. The Swachh Bharat Mission is one recent example of the government-civil society partnership for a public cause.

While the partnership has largely been productive for the country, with the government providing the funds and the civil society the manpower resource and reach for implementation of programmes, the relationship has not been free of tension and strain. This has been more visible in the area of human rights. All leaders from Indira Gandhi to Manmohan Singh held the civil society in suspicion. They blamed the ‘foreign hand’ for fomenting trouble in India with funds channelled into civil society groups. Singh was scathing on organisations protesting against the nuclear power plant project at Kudankulam and GM crops. Under Prime Minister Narendra Modi the action against them has been tougher.

The lack of fondness for civil society in the present dispensation is obvious. Speaking to trainee IPS officers not long ago, National Security Advisor Ajit Doval had this to say: “The new frontiers of war, what you call the fourth-generation warfare, is the civil society… Wars have ceased to become an effective instrument for achieving political or military objectives. They are too expensive or unaffordable and, at the same time, there is uncertainty about their outcome… But it is the civil society that can be subverted, suborned, divided, manipulated to hurt the interests of a nation…” The prime minister recently took a jibe at civil society calling the people involved in them ‘andolanjeevis’ (people who made a living from protests).

The approach of the governments, whichever it is, is understandable. They don’t want their policies to be questioned, least of all delayed or stalled due to protests. They don’t want negative public opinion against them to go around. But what surprises one is the spread of antipathy against civil society among common people.

What is happening here? Aren’t these the same people who benefit from the activities of civil society? To some extent, the negative sentiment has to do with the growing impression that civil society activists are habitual obstructionists. While raising voices against projects and policies, they ignore the greater common good, by extension the national interest. They may have their heart in the right place while seeking the protection of environment or wildlife or fighting for the rights of indigenous people but they come across as stubborn when they refuse to find a negotiated compromise involving all stakeholders.

In the case of Maoists, if the sympathy for tribal habitants of the forests in Chhattisgarh and adjoining states among a section of activists appear as sympathy for Maoists to any neutral bystander, then there is little reason to blame him/her. Governments, caught in a protracted war with the Left-wing rebels, would like and even put effort to drive the impression deep into the public psyche, but it’s for the sympathisers to convince people otherwise. The general anger against them proves their failure at it.

The same goes for their stand in the case of communal incidents. Their position appeared partisan, and consistently so. Many provided wonderful service to the victims, particularly in the areas of relief and rehabilitation, yet the impression that they were not neutral stuck. In hindsight, they were bad at perception management. It didn’t matter till the power and intellectual ecosystem were favourable. Both have changed now. Any punitive action against them is not likely to cause widespread outrage. The matter of high-profile activists held in the 2018 Bhima-Koregaon incident is a case in point. Arrested under the draconian UAPA, the activists, suspected to be linked to the Maoists, are still in jail. One of them, 83-year-old Stan Swamy, passed away recently.

Civil society derives its strength from close linkage to communities. This is the source of their legitimacy too. But it changes when sections of communities perceive them as corrupt, self-serving and exploitative. Such perception has gained ground after bureaucrats and politicians started dabbling in NGOs, seeking opportunities in them to mint money. It helped that they could leverage their connections to avail government funds and funding from abroad through the FCRA route. It was not unusual for their family members to run these organisations. Then there were those who calibrated their involvement in civil society to their political ambitions. Also, people have been noticing sudden signs of prosperity among NGO bosses that could not be explained by the activity of their organisations.

The image of the civil society activist had transformed into that of a greedy entrepreneur over decades. Dedication to a cause was gone, and so was the trust they evoked. The moral halo didn’t exist anymore. The linkage with the community was ruptured irreparably.

The country still needs civil society. But is it in a position to redeem itself?