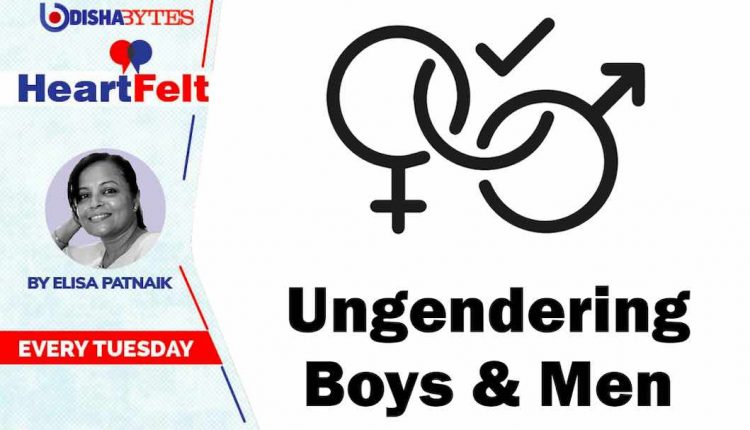 Soon after the ghastly Nirbhaya gang rape and murder, several videos and articles documented the way boys and young men, especially from India’s hinterland, viewed women and their place in the family and society. Most of the responses left me stunned and outraged. Although as an afterthought, it was hardly surprising. And understandably so, for these boys and young men since their childhood had all along been influenced by patriarchal norms and practices in their daily lives. For them, girls and women meant – subjugation, inferior, restrictions, domesticity, sexual objects and always to be taken for granted.

Young Indian males still struggle to come out of the shackles of identities that patriarchy and society have defined for them.

> Girls should not be roaming alone at night. It is their fault if something happens to them.

> Girls and women should always be in decent clothes. Wearing tight jeans and tops is obscene and not suitable for our culture. It attracts men and compels them to do bad things. My mother stays at home and does all the work and my sisters should also do the same. My father earns money for the family and I will also do the same.

> Although I don’t like my father hitting my mother, I don’t protest. Men have a lot of pressure and responsibilities and it’s natural for them to get angry when things are not up to their expectations.

Violence, sexual harassment and other forms of discrimination against girls and women are not independent actions. They often stem from the patriarchy that shapes notions of masculinity, femininity and other gender norms and archetypes.

Young boys and girls grow up with socio-cultural constructs of masculinity and femininity pursued over years in their own homes, community and society which gets further reinforced by peer pressure and popular culture. Thoughts, attitude and actions of boys are largely shaped by everyday sexism, notions of masculinity and violence that they witness both within and outside their homes.

Boys, adolescents and young men, especially from conventional families, are not only brought up in a patriarchal environment but are often either pressured or find it convenient to adhere to toxic masculinity. Freedom, rights and equality for women is largely seen by traditional men as a loss for men and a breakdown of the existing socio-cultural order. They are confused and ill-informed with hardly any access or avenue to share their predicaments, getting sucked up into the vicious circle.

Moreover, while girls and women who have been at the receiving end of patriarchy since long are beginning to protest, changing gender norms and getting empowered, boys and men are still grappling with it, unable to comprehend or accept the changing role of girls and women.

Boys and girls start developing their gendered identities from their childhood, influenced by their upbringing. It is at this age that they experience physical developments and become gradually aware of gender roles, norms and sexuality. Many boys experience body image anxiety during their adolescence, experience or witness gendered behaviours including violence and also tend to practise sexually risky behaviour. There is an immense peer and societal pressure to ‘man up,’ be ‘man enough’ and display toxic masculine traits. Boys and young men find it really difficult to express their emotions, feelings and dilemmas. When in a group or among their peers, boys and young men are often teased and bullied for not ‘eve-teasing,’ ‘harassing’ or not being manly enough.

When Rohini Nilekani Philanthropies (RNP) studied how the concept of masculinity gets constructed and what causes gender violence, many men shared how the idea of the man being greater than the woman is something that they not only pick up from the behaviour of other men around them but also from the behaviour of the women in their lives.

Masculinity frameworks of men as controllers and bread earners of the house, despite the fact that women work both inside and outside the house, also emerged from the study. Ideas such as ‘men are like that only’ or ‘if he hits me, he loves me’, further romanticised by media, were common responses.

In many cases, boys’ and men’s desire to exert male dominance and power is often triggered by their feeling of incompetence, inadequacy or vulnerability which further triggers their toxic masculinity manifesting in violence, harassment and other forms of discrimination and control. While men and boys do have greater freedom, choice and privileges over girls and women, their experience of masculinity and adhering to norms and taboos is often at the cost of their emotional, mental and physical health.

Besides, there is absence of safe platforms to talk about problems that give rise to violent behaviour, including those relating to issues of gender and sexuality along with a lack of positive role models among men, who can help change the discourse
for boys and young men.

Men’s control over women often comes at a price which is hardly spoken about. Their hesitation in expressing their feelings and vulnerability or displaying caring behaviour makes them closeted. But unfortunately, the approach adopted by most interventions for gender equality and prevention of violence against women focuses largely on either punitive actions or making girls and women responsible for their own safety. Very few organisations focus on addressing the root cause of gender discrimination perpetuated by patriarchy.

However, since the last few years, the importance of closely engaging with boys and men and sensitising them on gender equity and equality is being increasingly emphasised. Enabling boys to change their attitudes and behaviours and positioning them as role models not only helps in changing norms and stereotypes but also accelerates gender equality. For example, Jagriti Trust, a youth-centric initiative, conducted extensive workshops with young boys and girls and helped in creating informal boys’ peer groups to educate other boys. In fact, enabling boys to explore oppressive concepts of masculinity with their male peers was welcomed by both sexes. Engaging boys also positively impacted gender stereotypes and power dynamics at the community level.

Yet, keeping pace with changing gender norms is unsettling for both men and women. While families and parents of girls encourage their girls to play sports, build things, and become pilots, but many find it difficult to accept when young boys want to
cook and sew instead of playing sports or fixing gadgets. While it is somewhat acceptable for females to adopt masculine roles, it is still undesirable for men to embrace feminine roles.

Over the past three years, RNP has partnered with organisations to include men and boys in the gender empowerment efforts for girls and women. It advocates the need to start younger as the early adolescence age of 9–13 years age bracket provides an important window of opportunity to create awareness among children about existing patriarchal structures.

Mumbai-based Men Against Violence & Abuse (MAVA) is another such organisation working with men to promote gender sensitivity and break the shackles of toxic masculinity. It aims to improve the involvement of men as “partners” and active stakeholders by promoting positive male role models for young men and children.

Interrogating existing concepts around masculinity, opening conversations around sexuality and sexual health, educating and mentoring youth in schools and colleges on violence perpetuated in the name of rigid gender roles established by society – are among its key activities.