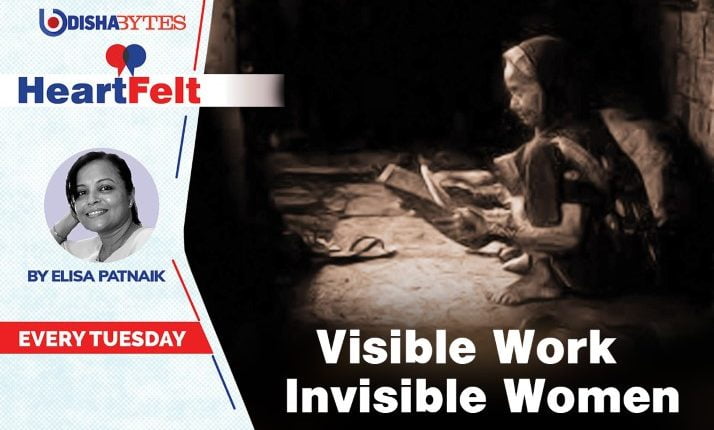 ‘Visible Work, Invisible Women’ — this profound title of a critically acclaimed photo exhibition by celebrated journalist P. Sainath, exemplifying the great range of work done by rural women in India, has stuck with me.

The evocative photos in the exhibition document the ‘astonishing labour that poor women put in every day of their lives and the gigantic, yet unacknowledged, contribution they make to national economy,’ in Sainath’s words.

The photographs are also a poignant reminder of the endless, back-breaking, arduous, time-consuming and risky work that women do to keep the home fires burning.

Both rural and urban women in India, especially from the marginalised sections, are among the primary labour force working both within and outside the domestic sphere — from brick kilns, construction sites, agriculture and farming to selling goods as vendors and as domestic helps and informal workers. All these, along with other laborious daily chores from cooking, cleaning, washing, caring for the family to collecting fuel, fodder and water. Many of these activities are often overlooked, remain unrecognized, unpaid, or poorly paid and, their contributions not reflected in the country’s economy. In addition, the working conditions of these women continue to remain dismal with poor working environments, the lack of basic amenities along with gender bias, exploitation, and harassment.

I also often wonder about the innumerable chores and work that women in general perform from dawn to dusk – domestic, caregiving and also as wage/salary earners. And how little of it is acknowledged, appreciated, considered, and measured within our families, communities, societies, and economies. We have all seen our grandmothers, mothers and aunts working from dawn till midnight in our own houses without taking rest, breaks or holidays.

It’s even harder for marginalised women who spend additional time and energy just trying to meet the basic requirements while also struggling with other gender and socio-cultural barriers. Sainath points out that such chores take a third of a woman’s life. In some places, women spend up to seven hours a day just getting water and fuel for the family. Fetching fuel, fodder and water keep millions of households going and those doing the job pay a heavy price for it, he says.

The chores allotted to women, commonly known as ‘women’s work’, are immense, endless and monotonous. Cooking (cutting vegetables, grinding, serving the family, washing utensils), washing, cleaning, looking after children and elderly members are among the most basic of chores. Add to it other tasks like fetching water and fuel, helping in agriculture, farming, looking after domestic animals (poultry, goat rearing, dairy etc.).

Although women from better off and privileged families may not struggle to fulfil basic requirements as compared to their underprivileged counterparts, they do not have it easy either when it comes to gendered division of labour. The prescribed gender roles more or less remain the same for them. Women who rise at dawn to prepare tiffin and lunch for their children, spouse, and themselves, cook, clean, wash, attend office and work, pay fees, attend PTMs, monitor their children’s studies, drop children off for their sports and hobby classes, care for the entire family when sick, attend to festivals and other social obligations.

Here too, most of the women are taken for granted and their contribution hardly acknowledged. Women across India work on an average for more than 12 hours in a day and are often underrated for the work that they do. Women’s work is not just devalued through patriarchal ideologies of domesticity, it continues to remain invisible.

Since girls and women are socially and culturally conditioned to be the primary domestic workers, caregivers and supplementary wage earners, they take up this role easily and unquestioningly. While girls from poor households quit education early, those from better-off families, though well-educated, assume the role of ‘super women’ who cook, clean, care, work, look good and transform themselves into de facto cheerleaders of the modern happy Indian family.

There is another kind of ‘invisible work’ that women get dragged into. In many home-based production sectors like handloom and handicraft, women often support men in doing important backend work which again goes largely unpaid and unrecognised. Women and children of weaver families, for example, play a key role in the production of yarn and cloth, but it’s the male weavers who are the decision-making authorities and emerge as key craftsmen in the household. Though girls and women support men in the subsidiary and preparatory processes and pre-weaving work like preparation of the yarn and the looms, dying and tying and colouring of yarn and fabric, they hardly learn the craft and are relegated to the background.

Similarly, in home-based handicraft productions, it’s women who undertake the tedious task of preparing the colours, creating the base, keeping accessories ready. They play a supportive role, contributing their labour to the final product and the price, and yet remain unpaid, semi-skilled and unrecognised for their toil. Thus, women largely continue to remain at the margin of monetary power, decision-making and authority. While males get formally enlisted as owners and primary workers, women who assist men are secondary workers.

In India, this gender divide is nowhere as glaring as in agriculture and farming where women are engaged as cultivators, labourers, forest produce collectors and small livestock carers. It’s women who mostly do the tedious and labour-intensive and non-mechanised processes of transplanting, weeding, harvesting, threshing along with other post-harvest work. But they are unpaid/underpaid, unacknowledged, and worse, left out of their rights and entitlements and continue to remain unskilled or semi-skilled.

Many women also get caught up in assembly line work in various industries which, though crucial, is invisible and results in their deskilling and traps them in long work hours, tedium, and exploitation.

Ironically in Indian homes and societies, male labour and earnings are revered, while women’s labour is devalued and they are either unpaid or their earnings dismissed as ‘supplementary income’ even though it contributes to meeting household expenditure.

It is this fundamental gendered division of labour where women are primarily burdened with unpaid domestic and care work along with other unrecognised labour that drives patriarchy. Despite contributing and sustaining households and economies female labour is looked down upon and not part of the national accounting.

The low female labour force participation in India is among the lowest in the world not because women do not want to work, but because women absent from the workforce are busy in child and elderly care, cooking, cleaning, and other household chores. Even when they do work, it is mostly low-paid, temporary or unsatisfactory work. Also, importantly, when women work, it does not free them from their domestic responsibilities and they are now saddled with both paid and unpaid work, resulting in the ‘double burden.’

Oxfam’s report, ‘Time to Care: Unpaid and underpaid care work and the Global Inequality Crisis’ 2020 notes that such inequality is based on a “…flawed and sexist economic system that values the wealth of the privileged few, mostly men, more than the billions of hours of the most essential work – the unpaid and underpaid care work done primarily by women and girls around the world.”

‘On Women’s Backs’ is another Oxfam report that notes how Indian women’s care work, both paid and unpaid, is neither considered an economic activity nor reflected in the measurement of economic development. The Report found men to be afraid of being shamed for doing housework and women fear being shamed for making men do the housework.

The Report also shows that Indian women and girls put in 3.26 billion hours of unpaid care work every day — a contribution of at least Rs 19 trillion a year to the Indian economy. Women’s unpaid care work is rarely measured as it is seen as something that is done for love, duty and expected. A sexist economy based on both structural and gender inequality is fuelled by a combination of patriarchal, social, and cultural norms which reinforces the practice. This inequality within homes, family and society continues at the workforce as well.

Acknowledgement of this massive social and economic contribution of women and documenting the value of their work through policies, studies and data would go a long way in establishing their worth. Working towards shifting gender norms, redistributing care work more fairly within households and communities is another important step. Provision of work place facilities like water, toilet, creche child care, safe and accessible transport are important for women to participate equally in the labour market. Besides, access to basic facilities like water, toilets, cooking stoves and gas, electricity, can help improve women’s lives considerably.

These visible work done by invisible women are not just lifelong but continue to devalue their work and perpetuate age-old inequalities. Recognizing invisible labour – both paid and unpaid – translates into recognizing the people performing it. And it’s high time we remove the blindfold from our eyes and minds.

25,000-Plus Indians Committed Suicide Due To Unemployment, Indebtedness During 2018-2020