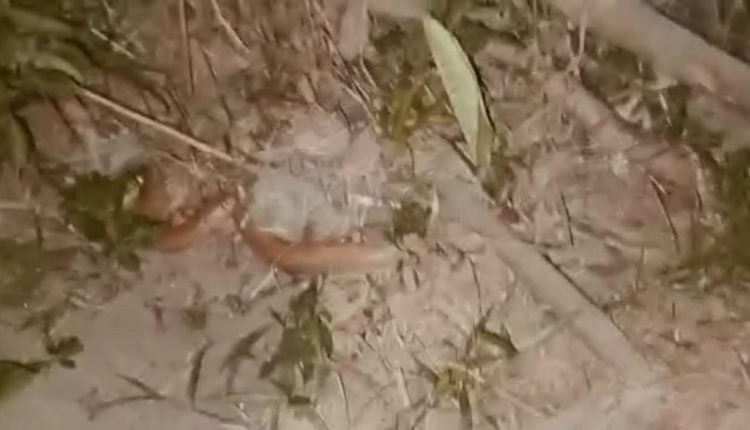 Bhubaneswar: In a rare spectacle, a spectacled male cobra, though trapped in a garden net, was found mating with a female cobra.

The rare sight came to light when Sanjay Swain of Delanga area in Puri district saw a cobra wandering in his backyard and called Snake Helpline for help. Susant Kumar Behera, a volunteer of the Helpline, rushed to the spot and found a spectacled cobra trapped in a garden net and another one crawling on it.

Since Susant had not encountered such a situation, he sent a video of it to Subhendu Mallik, general secretary of the Snake Helpline. The video shows a 4 feet long cobra poking its head on the body of a 5-ft cobra trapped in the net.

Since it is natural behaviour on the part of the smaller female cobra to crawl on the body of the male and poke its head before mating, Susant went to the other side of the spot and found the two tails in mating position. He waited for 30 minutes for the two snakes to complete the process on the advice of Subhendu.

Then Susant rescued the snakes by cutting the net and put them in his bag. Later, he released them in a nearby natural habitat to facilitate them for future mating.

Stating it to be an absolutely terrific experience, Subhendu said, “Courtship and mating of snakes have been very well documented. But, a trapped male cobra successfully mating with a female cobra is a rare sight. It was a stunning experience”.

He further said since normally male spectacled cobras are larger than females, they identified the larger one entangled in the net to be the male. The female was the smaller one who seduced the male cobra successfully even though it was trapped.

“Had the snake not been rescued from the net, it was surely going to die. But it could overcome its stress of entrapment and manage to copulate with the female cobra,” Subhendu said.

TVS Follows Infosys & Accenture; To Vaccinate All Its Employees For Free