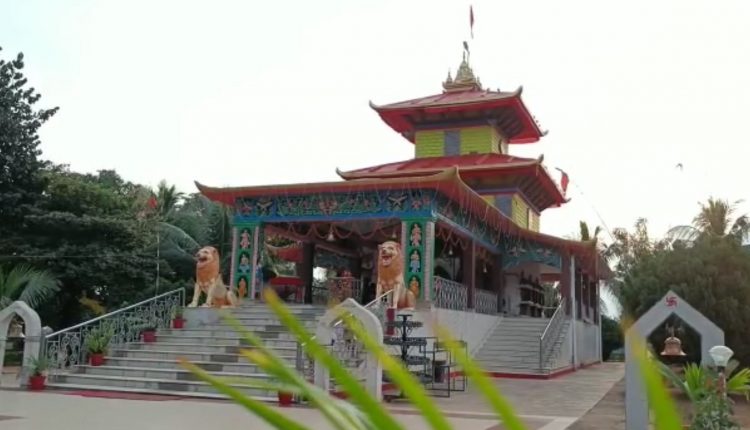 Jharsuguda: The celebration of Dussehra has a different significance for Nepalese community in Odish’s Jharsuguda. In a departure from traditional practice of animal sacrifice, they release white doves on the day wishing for peace and prosperity in the world.

Bhubaneswari Durga temple, built in the campus of 2nd Battalion of Odisha State Armed Police (OSAP), comes alive during Dussehra when the people belonging to Nepalese community including the Battalion personnel turn up in huge number for celebration.

They also perform Durga puja in the temple, built like a replica of Pasupatinath temple in Kathmandu, during the Navratri. On the first day of the Navratri, the temple’s priest, who is also Nepalese personnel of the Battalion, sows seeds of 5 different crops around the temple premises.

On the day of Dasami, the priest collectors the sprouted seeds, which are called ‘Jamara’, and distributes those among the devotees who carry the sprouts to plant in their houses.

The Nepalese also performs special puja for their ‘Bhujali’ (a sharp weapon), which is part of their identity, in the temple during Dussehra which is called ‘Dasai’ by them. On the day the ‘Bhujali’ is worshipped, they release white doves in the sky wishing for world peace. Unlike Hindu rituals, they do not have the ritual to perform any kind of animal sacrifice during Durga puja in Devi shrine.

In order to keep their culture and traditions alive, the personnel of 2nd Battalion had constructed Durga temple in 1995. Besides the Battalion personnel, the members of Nepalese community from outside the campus have been celebrating Dussehra in the temple since then. The temple was renovated and developed in 2002.

Killer Jumbo Misses Its Calf At Rescue Centre In Odisha