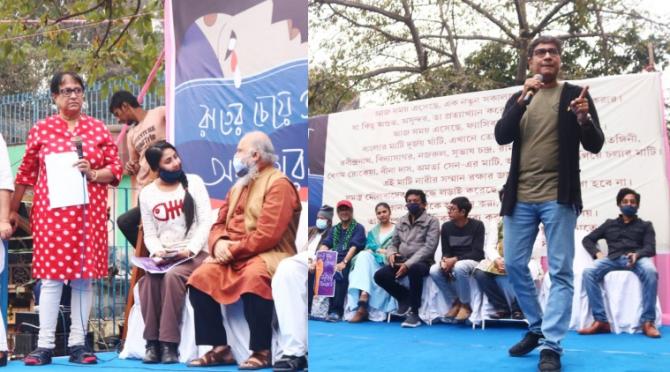 Kolkata: The West Bengal artistes’ forum held an agitation where they demanded a non-political platform to safeguard the state and nation from alleged atrocities of the BJP.

Poll analysts believe that unity of the artistes could be a major blow to the BJP in the assembly elections scheduled to be held in around three months’ time.

The controversy was triggered by a recent TV chat show, where some of the artistes spoke about consuming beef, and faced backlash on social media.

Urging for a non-political front to safeguard safety of actors, Debolina claimed that had she done any wrong, capital punishment would have been the ultimate thing and not rape.

Debolina remarked that the BJP claims to be with the Hindus, but doesn’t respect women.

“Abusive comments were made about my mother in social media by the BJP youth wing leader. The BJP is destroying the democratic fabric of the country. They worship Durga but don’t respect women. It is very easy to curse a woman by physically and verbally insulting her,” said Debolina.

A few days ago, a police complaint was lodged against another Bengali actress Saayoni Ghosh by former Meghalaya Governor Tathagata Roy for allegedly hurting sentiments of Hindus by sharing a meme on Twitter.

Saayoni defended herself, saying that the said incident took place in February 2015 and she had not posted the meme.

Speaking at the protest rally, Saayoni claimed that BJP is taking away the basic fundamental rights of people and forcing people to dance to their tune.

“The BJP claims that we are cheap people and earn money through cheap means. They even say that the West Bengal police are protecting us and also threatens to rape once they catch us. A non-political forum is necessary to curb the violence of the BJP. They are not allowing people their basic rights,” remarked Saayoni.

Director-actor Kaushik Sen, who has been extremely vocal against the ruling Trinamool Congress in West Bengal, said that all parties should unite to defeat the BJP in the upcoming assembly polls.

“I was discussing with my friend that the Left Front should unite with the TMC to beat the BJP. I am still against the TMC… but to save the country from fascist BJP, we should all unite,” Sen argued.